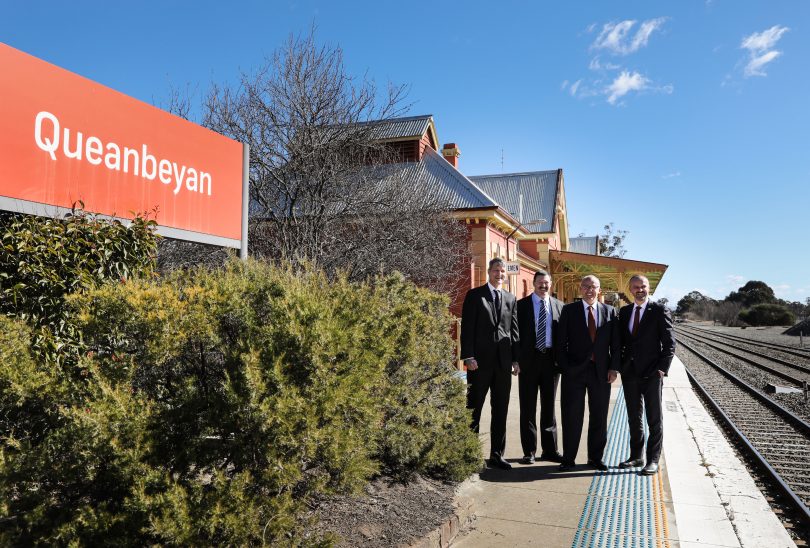 The ACT Government has committed $5 million in matched funding with a Labor Government in NSW to a detailed business case for a faster train service between Canberra and Sydney.

The announcement follows the commitment from NSW Labor leader Luke Foley that a NSW Labor Government would work with the ACT Government on the project and provide $5 million towards the business case.

Chief Minister Andrew Barr said that in a recent Government survey, 57 per cent of respondents said they would be more likely to travel via train between Canberra and Sydney if the travel time was between 2-3 hours.

Mr Foley made the announcement alongside Mr Barr, as well as Labor Candidate for Goulburn, Ursula Stephens, candidate for Monaro, Bryce Wilson, and Federal Member for Eden-Monaro, Mike Kelly at Queanbeyan Station.

He said that reducing the current journey time would encourage tens of thousands of people to commute to Canberra and Sydney from towns such as Yass, Goulburn, the Southern Highlands and Wollondilly Shire.

“If we can reduce rail journey times along the corridor then towns like Goulburn can truly grow as more people choose to live there and work in the region,” he said.

A shift from road to rail also had the potential to take tens of thousands of cars off the roads.

“For the past 18 years, employment in the corridor has grown by 1.7 per cent a year and each day 50,000 people commute into the ACT for work, while around a third of Wollondilly’s residents travel to Greater Sydney for work daily,” he said.

Labor says a faster rail service could be funded from the sale of NSW’s share in the Snowy Hydro if it meets strict criteria.

That should pay for another feasibility study!

Journey time and cost alone will determine the viability of this move.

Thinking about the budget

I bought a return airfare to Europe from BA. It was $20 cheaper to fly from Canberra than Sydney. 😁

how many business cases have been developed over the decades. ? it's good money for the people that write them but the trains wont be better or faster.

I guess the tooth fairy will be making a comeback too?

Unless it reduces travel time to 2 hours and for a fare that is significantly less than flights, it will not get used. I hope that it succeeds.

Shouldn't be hard to make it cheaper than flights, flight tickets are outrageous

Would be good if it were only a 1 hour trip

This is so disappointing; Sydney to Canberra is the most studied passenger Rail corridor in Australia. The data already exists. The options for route improvements exist.

Drop the partisan politics and take a proposal to the NSW Govt.

I’d much prefer to sit in a train, with access to a buffet and a working toilet, on a much smoother ride than the Federal Highway, and where I can use an electronic device the whole time and not have my trip cancelled at the last minute because of fog.

I’m curious - are there any quick wins here? Track, signalling, alignments improvements that could see existing services sped up and frequencies improved?

Kelvin L I remember that a Spanish company pitched a upgrade that would cut time in half. Only 100 mil I believe.

Talgo trains could improve speeds on the existing network, but the NSW Transport minister’s reply to them asked them to make a proposal detailing how they’d be maintained (and where), how through-life support would be delivered, and a range of other things before he could consider it further.

In terms of quick wins, they’re not really quick so much as cheaper than high speed rail. A deviation to straighten the alignment between Douglas Park and Yerrinbool in the Southern Highlands would cut around 25-30 minutes off the trip in a section where trains have to slow to descend into Picton and get back out onto the flatter grounds again. Building a new alignment from north of Goulburn to at least Marulan would provide a better grade and could cut another 10-15 minutes.

The rolled gold solution would be a new Canberra-Goulburn alignment, but that would cut Queanbeyan from the network, which wouldn’t be politically viable. All up you could probably save an hour, with earthworks and new track, but the real gain would be to combine those with Talgo-like trains with tilting technology in my view.

Signaling is about as good as it’s going to get on that line, and the current 3 trains per day each way cross each other on the double-tracked section between Sydney and Goulburn. Apart from the garbage train to Tarago, there’s no other traffic between Goulburn and Canberra. Enrty into Sydney is pretty good already thanks to the Kingswood to Revesby quadruplication.

It actually sounds like it wouldn’t cost a huge amount of money to run a good and reasonably fast service, albeit not truly high speed, service between Sydney and Canberra. Taking a large number of flights out of Sydney Airport could also go towards justifying the cost of the rail improvements if it could reduce or remove the need for a second airport and the associated tens of billions of dollars infrastructure needed for it.

Whatever happened with the Talgo proposal? They even offered a train free of charge to test. Haven't heard a peep since the proposal

It's one small step on the right direction. The whole region would benefit, one day Canberra and Queanbeyan will be one continuous urban area.

Here we go again. Let’s throw another X million dollars of tax payers money at a department, which will get funneled off to some consultants, to produce yet another report, of a subject that’s been studied to death. Then ask the Federal government for a pile of money, whom will declare it’s all too difficult/expensive/uneconomic/… and then do bugger all. It’s only our money after all.

“A shift from road to rail also had the potential to take tens of thousands of cars off the roads.”

This could happen tomorrow if the funding was used to establish a commuter rail service from Bungendore to Kingston via HQJOC and Queanbeyan. That’s where the demand is.

Dolla Bill - 10 hours ago
Tom rubbish together, recycle together, wheelies boys for life View
Ashley Wright - 11 hours ago
Peter Mcleod it is a dispute between a private company and its workers. Nothing to do with Andrew. View
Stephen Finnegan - 13 hours ago
Fletcher Beverley Good for them. When's the last time paramedics went on strike?... View
Food & Wine 22

Toni Isaacson - 17 hours ago
Nothing harmless about Hallowe'en View
Jennifer Buerckner - 19 hours ago
the kid's in my suburb don't even try to dress up. they just won't fee stuff and knock on your door 4 or 5 times View
show more show less
*Results are based on activity within last 7 days

@The_RiotACT @The_RiotACT
The Bushfire Royal Commission has identified climate change as an increasing risk but has avoided recommendations to reduce emissions https://t.co/uN8VAkAIOK (31 minutes ago)