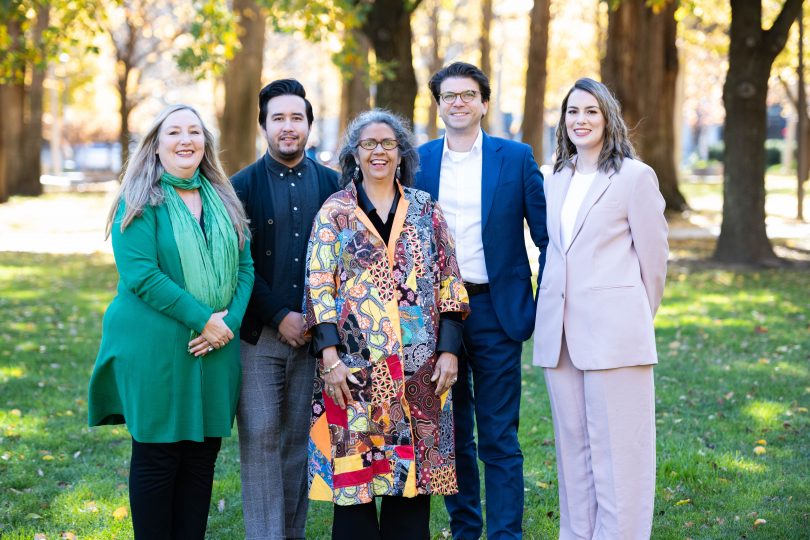 The ACT Greens have announced their remaining federal election candidates, after having named Tim Hollo for the seat of Canberra and Dr Tjanara Goreng Goreng on the Senate ticket earlier this year.

They are touting the team, which includes three women, one Indigenous, as a diverse list to represent Canberra’s progressive community.

Accountant, artist and small business owner Kathryn Savery will run in the southern seat of Bean; refugee advocate and environmental scientist Natasa Sojic will run in Fenner; and librarian and unionist James Cruz will join Dr Goreng Goreng on the Senate ticket.

Ms Savery said volunteering in the 2020 ACT election motivated her to run in Bean.

“It was an amazing campaign that demonstrated the level of community support for the Greens across the ACT,” she said.

“That’s why we’ve started campaigning early. We’ve already participated in a series of community forums, stalls and door knocks, and had an overwhelming response with particular concern about climate change and political integrity.”

Ms Savery said her career helping small and large businesses manage their financial affairs has shown her that better financial management would allow the government to achieve better outcomes for everyone.

She also said people in the south of Canberra who remember the Black Summer bushfires want elected representatives willing to act on climate change.

“I would be proud to represent this diverse and inclusive community, which, like me, wants a local MP who will vote in parliament to end offshore detention and provide greater support to new Australians,” she said.

Ms Sojic said Canberrans overwhelmingly back the Greens’ plans to cap donations to political parties at $1000, and establish an Independent Commission Against Corruption.

Mr Cruz, who ran in the seat of Kingsford-Smith in Sydney at the last federal election, said concerns with inequality and economic justice are on the rise.

“I think the COVID-19 pandemic has shown just how precarious we all are, and reminded people of the importance of universal public services and welfare systems that meet people’s basic needs,” he said.

Mr Cruz said growing up in public housing also showed him how critical it is that Australia has quality public services and welfare systems that meet everyone’s basic needs.

He said inequality has deepened, particularly when it comes to housing and job insecurity, and that the Federal Government’s decision to cut the JobSeeker rate to back below the poverty line has made matters worse.

ACT Greens spokesperson Clancy Barnard said that due to the surge in membership since the 2020 ACT election, the party will hold community events in every suburb in Canberra.

The Greens plan to cap donations at $1000 but happy to accept $1.6m from Wotif founder, Graeme Woods

Yes, just like they took $30,000 from high-end gambler Duncan Turpie in 2014. It’s called hypocrisy – something the Greens are experts at, along with self-righteous proclamations on what ‘Canberrans overwhelmingly back…’ Their alliance with Labor has left the ACT short of basic services, and long on white elephant indulgences like the tram.

Mitch Bourke - 26 minutes ago
I was hit by a branch checking the mail on Monday 3 stitches later and an hour on hold to access Canberra for a tree that was... View
Peter Campbell - 2 hours ago
In N. America a study of tree failures found that Euks in general were not any more likely to fail that non-Euks when the dat... View
julzrockz - 3 hours ago
If we don't have native trees then we can no longer call Canberra the bush capital. Prior to white settlement this region was... View
News 319

@the_riotact @The_RiotACT
For Ray McJannett, it's all about capturing memories - whether it's the Tomb of the Unknown Soldier at the @AWMemorial, or the hard life lines in the face of an old shearer https://t.co/kL9LmKKCao (40 minutes ago)