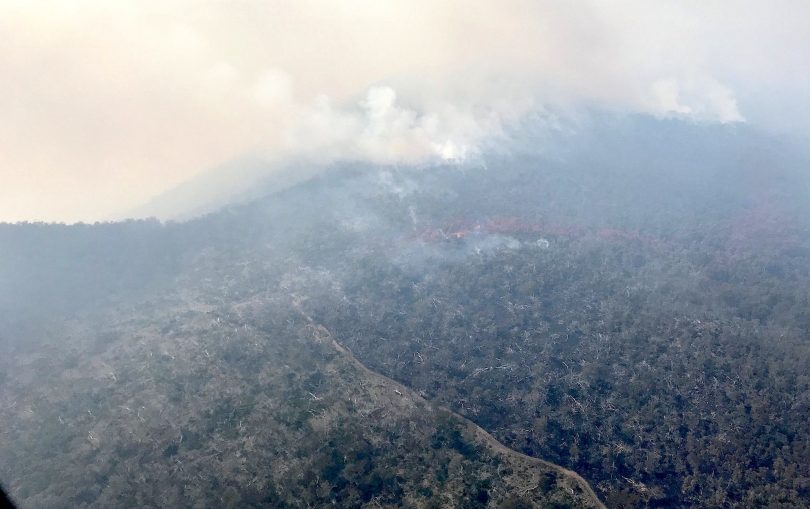 The Mary’s Hill fire, west of the ACT border in NSW. Photo: ESA

As rain and thunderstorms fall on fire grounds to the west and south-west of the ACT this afternoon (15 January), Emergency Services Agency (ESA) Commissioner Georgeina Whelan said the ESA will be engaged in “campaign firefighting” during the coming weeks.

While briefing the community and media during their daily updates today, both Commissioner Whelan and ACT Chief Minister Andrew Barr said their attention remains focused on a number of active fires near the ACT border, particularly the Mary’s Hill fire, west of the Namadgi National Park.

“I need to stress this is going to be a campaign of fighting this fire over the coming weeks, not days, but just how many weeks will be determined by how much rain falls in the coming three or four days,” Mr Barr said.

The Mary’s Hill fire had advanced “a few hundred metres closer” to the ACT in the last 24 hours, but still posed no immediate threat to properties.

Here is a sneak peak of some of the great work going on behind the scenes at Mt Ginini and Pryor's Hut. pic.twitter.com/mhIqiG8xW1

Commissioner Whelan said the Mary’s Hill fire was “of concern” and was burning 4.8 km west of the ACT border, approximately 35.5 km from the urban interface and 32 km from the closest remote property at Uriarra.

“What we want is a sustained period of rain that would give us well and truly more than 50 mm of rain over a four to five-day period. That will buy us time. It may extinguish certain areas but it would not put the fire out completely.

“For us, that is why we are talking about campaign firefighting now. It’s not to alert the community or concern the community. It’s to say the nature of the fires and the weather that is predicted means we are going to be in for the long haul of consistent application of firefighting assets to eventually extinguish these fires.”

Commissioner Whelan said the best outcome with the predicted rain is for a substantial amount to fall consistently, rather than a heavy downpour that will create flash flooding and unsafe fire grounds.

“Although this is a welcome change and we will celebrate the rain if and when it falls, we still need to remain vigilant and also resilient.

“This is not the time to become complacent. Many of you have prepared your homes for a bushfire; however, it is also the time to prepare for storm activity.”

The hit & miss nature of #thunderstorms means it's difficult to forecast exactly where the heaviest rain will be—some parts of #bushfire & #drought affected eastern Australia could see 50–100 mm over the next few days; while others may see very little https://t.co/T7MYuIdxkO pic.twitter.com/zgmiBmqcIG

Commissioner Whelan said she had flown over many of the important cultural assets and huts in the region, some of which had been destroyed. The historic Priors Hut, on the crest of the Brindabella Range in the Namadgi National Park and Bimberi Nature Reserve, has become a strategic area of ongoing protection.

“The ACT Parks and Conservation Service continues to build on conservation strategies to help us protect our precious assets. These include establishing areas of bare earth immediately surrounding the huts and installing and activating hoses and drip systems and a water supply to support those systems,” Commissioner Whelan said.

“The heavy plant machinery that is out there is paying due respect to our land. They’re calling it ‘strategic engineering’ and ‘precision plant activity’. It is almost like a surgical movement out there in terms of the focus they have on value-adding to the very good work we’ve done, but also respecting our landscape and the flora and fauna that makes Canberra such a wonderful place to live.”

There are two other fires the ESA is keeping a close eye on.

The Adaminaby Complex fire has ACT assets supporting the NSW Rural Fire Service, which said fire activity is easing across the fire ground.

“There are still areas of active fire. Crews are undertaking backburning operations, where conditions allow. This may increase smoke across the fire ground,” the NSW RFS said.

The Dunns Road fire has remained within containment lines and is “being controlled”.

“The fire is burning south of the Hume Highway in areas around Ellerslie, south of Tumbarumba and south of Goobarragandra. Fire activity is easing across the fire ground,” the NSW RFS said.

To stay up to date with fire activity, visit Fires Near Me.