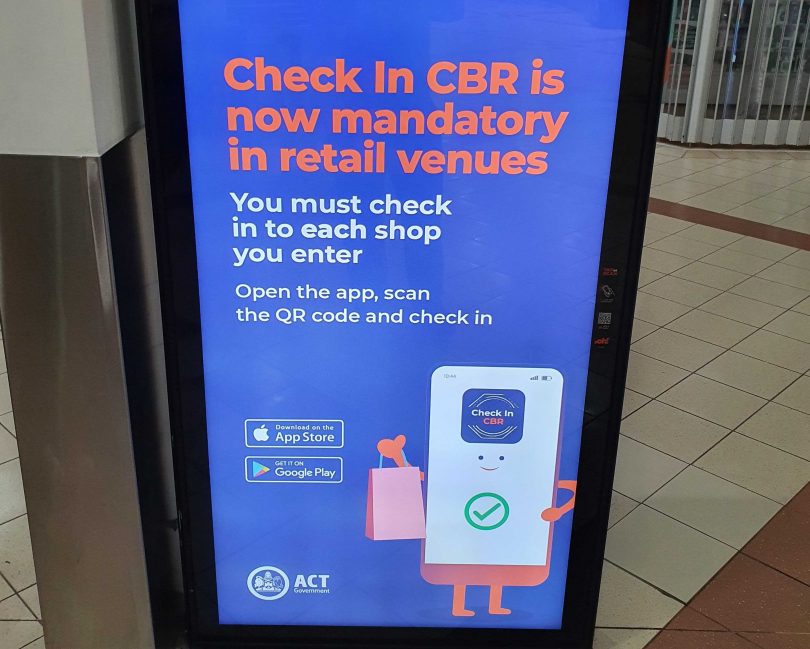 The ACT Government says checking in will remain a useful tool for the foreseeable future. Photo: Region Media.

As the ACT records 449 new cases of COVID-19 in the last reporting period, the ACT Government says the Check In CBR app will remain a useful tool as the Territory readies itself for future waves of the virus.

A man in his 90s has died with COVID-19, taking the ACT’s local pandemic death toll to 27.

Yesterday, Minister for Health Rachel Stephen-Smith rejected what she described as an “astonishing” call from the Canberra Liberals to scrap the check-in app, which is currently largely defunct in terms of its initial purpose – to assist authorities with contact tracing after individuals test positive to COVID-19.

Instead, Ms Stephen-Smith said checking in could still be useful for people who test positive and want to notify those they were with of their diagnosis.

It’s hoped the app could be better automated in the future, and it’s likely that checking in will only be mandatory in high-risk venues such as nightclubs or large, unticketed events.

For now, checking in remains mandatory, although the Minister acknowledged it’s “unlikely” anyone would be fined at the moment.

The ACT Government has yet to release its detailed epidemiological update which was supposed to be made public on Wednesday, 2 February.

READ ALSO School RAT rollout challenging for some parents; will be re-assessed before round two

Over half (53.2 per cent) of the Territory’s 18-plus population has now received a booster shot, while 71.9 per cent of the population aged five to 11 has received one dose.

Investigations are ongoing to determine any factors behind what is perceived as a slowing in the take up of booster shots. Yesterday, 16 to 17-year-olds became eligible for a booster dose of Pfizer to be administered three months after their second dose.

Authorities said that anyone who was 15 when they received their second dose but is now 16 is also considered part of this cohort.

It’s estimated around 9000 Canberrans were affected by this change. Of these, 8000 are already able to book in for a shot.

Plenty of booster appointments are available as early as today at ACT Government clinics, with GPs and pharmacies also able to administer boosters.

READ ALSO ACT Government prepares itself to deal with pandemic for years: ‘It’s not going away’

There are 2494 people in hospital in NSW. There are 160 people in ICUs around the state.

There are now 707 people hospitalised with the virus – down from 752 reported yesterday. Of the state’s 12-plus population, 93 per cent is now fully vaccinated and 42 per cent of the state’s eligible population has received three doses of the vaccine.