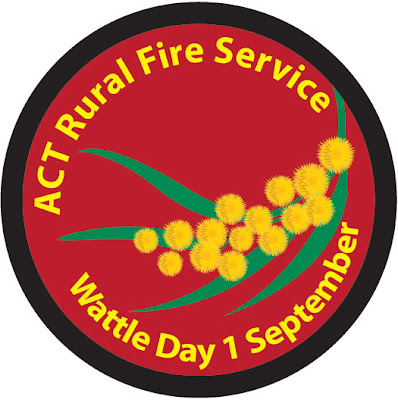 Two Australian volunteer organisations with a tradition of service to the Australian community, local rural fire brigades, and the local Wattle Day organisation, have formed a new partnership to sell Wattle Day badges to raise funds for the ACT’s Volunteer Brigades Association that represents volunteer firefighters here in Canberra.

Wattle is Australia’s national floral emblem; National Wattle Day is a day to celebrate Australia and being Australian, and the volunteers in our local rural fire brigades show the best of the Australian spirit.

National Wattle Day is celebrated each year on 1 September. 2010 is a very special year because it is the centenary of the wattle day celebrations which began in three states (NSW, Victoria and South Australia) on 1 September 1910.

‘We think this partnership provides an opportunity for Australians to express their love for this land in a very practical way that helps an organisation for volunteer firefighters, whose role is increasingly important to the Australian way of life’, Terry Fewtrell said.

‘Wattle is a unifying national symbol and local bushfire brigades unite our community and show us the best of the Australian spirit. When bushfires ravage the landscape, wattles are often the first plants to grow back. They symbolise the resilience and strength of Australians to live with and recover from fire’, stated Terry Fewtrell.

Members of the Canberra-based Wattle Day Association designed and made 1,000 Wattle Day badges to support the volunteer rural fire brigades in our community. The badges will be on sale across Canberra, on the weekend of 27/28 August 2010, for $2 each. Proceeds will go to the RFS Field Day.

ACT rural fire brigade volunteers will be selling badges at shopping centres across Canberra as part of the brigades’ spring initiatives to raise awareness of bushfire preparations.

Badges will be available at:

The 2010 field day will be held opposite Bunnings Tuggeranong on Saturday 18 September and members of the public are welcome to come along and view crews competing and have a go at some activities.

Any businesses that would like to sponsor the 2010 Field Day, we would love to hear from you. Please contact Kevin Cunningham on 0448 292 577

Teagan Erin - 5 minutes ago
Shelby inside anu residences 😂😂 View
Billy Fox - 50 minutes ago
Emma-Lee Louise Campbell scoot crew View
Chris Sherlock - 14 hours ago
Jorge Gatica i suppose you’re one of those people who thinks that road levies pay for roads. You know it all goes into the... View
Opinion 95

Frances Jane - 1 hour ago
Dan Backhouse I'm virtually vegetarian, and have been vegan at times, but found the article to be outdated. Perhaps it's the... View
Nick Sifniotis - 3 hours ago
And the second thing is "you're objectively evil". Cool, that's the last time I'm inviting you over for lunch View
Jannah Fahiz - 6 hours ago
Oh my god. These comments are wild! Thank you for a good read RiotACT :) View
Food & Wine 10

Elysha Fordham-Young - 13 hours ago
Where is the Waramanga one please? I can't find it. View
Sport 7

Archie Mac - 22 hours ago
My uncle told me in climbed the fence as he couldn’t afford to pay. Said he walked in just in time to see Bradman walking o... View
show more show less
*Results are based on activity within last 7 days

@The_RiotACT @The_RiotACT
There's a big week ahead with TEDxCanberra, a trading car fair, a car show, and the return of Sunset Cinema among the events on offer https://t.co/c6zON8V2x6 (11 hours ago)

@The_RiotACT @The_RiotACT
The ACT Inspector of Correctional Services has detailed a litany of failures in the Court Transport Unit, including unsafe vehicles https://t.co/XwMckH6O4m (13 hours ago)