ACT to be the most open government of them all? Twittards Uber Alles. 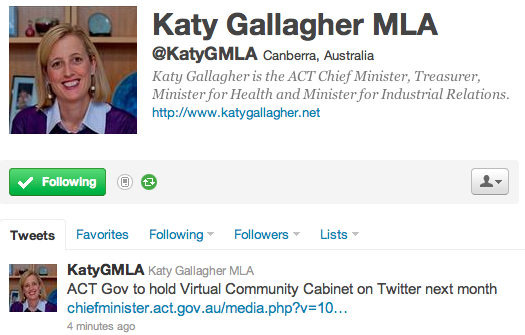 Chief Minister Gallagher has announced her plans to make the ACT’s governance the most open and transparent in all the land.

The plans outlined in a Ministerial Statement to the Assembly today, are set to make the ACT Cabinet the most open in the nation and include a commitment to hold a Virtual Community Cabinet on Twitter next month.

“The ACT already has a strong foundation on which to further develop open government, for example we have the most open legislative framework for access to Cabinet documents in the country. We have always taken a proactive approach to communicating with the public, but we are ready to take the next steps.

“Open Government refers to a way of working, and rests on three principles; transparency in process and information; participation by citizens in the governing process and public collaboration in finding solutions to problems.

“Creation of an Open Government Website will provide a single gateway for access to Government information and engage Canberrans in the governance of the ACT and will be operational within three months. This will enable access to government material released through Freedom of Information through upload to the web once FOI requests have been released to the applicant.

“I will also release a weekly report on key issues discussed and decisions taken by the Cabinet, starting in the first week in July. This will make the ACT Cabinet the most open of any government in Australia. I want the community to be informed about the challenges and issues being considered by Cabinet.

It was sounding so good up until she made it twat based.

Gor those who’ve been lucky enough to miss it thus far here’s the @KatyGMLA tweet stream.

5 Responses to ACT to be the most open government of them all? Twittards Uber Alles.
Filter
Showing only Website comments

I applaud the efforts of the ACT government to become more open. However the tactics the Chief Minister outlined are highly dubious and appear more designed for effect than substance.

As Canberra has the highest concentration of people working in Government 2.0 and open government in the country, I would have expected more from the ACT government.

They will certainly receive more criticism if they’re not actively consulting.

I expressed my views fully over at: http://egovau.blogspot.com/2011/06/act-finally-outlines-open-government.html

I care less about an open, transparent Government and more about them being held accountable for the decisions and actions that go pear-shaped. Without accountability, being able to access information through FOI means nothing unless I want a lesson in how not to do things.

SPOT ON. If they were serious, election ‘promises’ would form part of a contract with the people. Would make them more careful about what they SAY they are going to do. Break the contract – and back to election you go…

How the f&ck can any communication medium that limits one to bursts of 140 characters or less be seriously considered for the serious and subtle processes of democratic government?

The complete, utter and profound stupidity inherent in this trivialisation of our democratic processes.is insulting and offensive, at least to me.

I care less about an open, transparent Government and more about them being held accountable for the decisions and actions that go pear-shaped. Without accountability, being able to access information through FOI means nothing unless I want a lesson in how not to do things.

Julie Macklin - 11 minutes ago
Carole Ford Not many people cycle for sport. Most people use it for transport. View
Mark Johnson - 7 hours ago
If it’s not licenced what’s it doing on a roadway anyway … View
Julie Macklin - 11 hours ago
Alicia Conley The ACT has no cycle paths. They are shared paths. Yes, those around the lake were built with people on bikes i... View
News 20

Mark J Avery - 44 minutes ago
Try working next door to this dumping ground!! View
Roger Kropman - 5 hours ago
This is a disgrace but it reinforces the point that rubbish dumps / tips should be free to dump your trash, otherwise idiots... View
Nick Savino - 9 hours ago
CCTV and fine View
News 14

What the ACT Government’s COVID-19 Bill will do

@The_RiotACT @The_RiotACT
Snapper at the Canberra Southern Cross Yacht Club is getting a makeover. Check out the plans https://t.co/Ul1f9X7YUR (42 minutes ago)