Attorney-General Shane Rattenbury will put forward a bill that will change the name of the crime “sexual relationship with a child”. Photo: Dominic Giannini.

Following interstate and national advocacy from 2021 Australian of the Year Grace Tame, the ACT Government will change the name of the crime “maintaining a sexual relationship with a child” to “persistent sexual abuse of a child”.

Ms Tame called for the change at the Meeting of the Attorney-Generals on 12 November 2021. She’s publicly said that in her own circumstances, media reporting around her abuse used the term ‘relationship’ which was misleading and diminished the reality of what had occurred.

Ms Tame was groomed and sexually assaulted multiple times by her 58-year-old teacher when she was 15.

“I was struck by Ms Tame’s powerful advocacy last November,” Mr Rattenbury said. “We had very clear feedback from Ms Tame that it’s an inappropriately named offence – it implies a relationship with a degree of consent which is not possible with a child.” 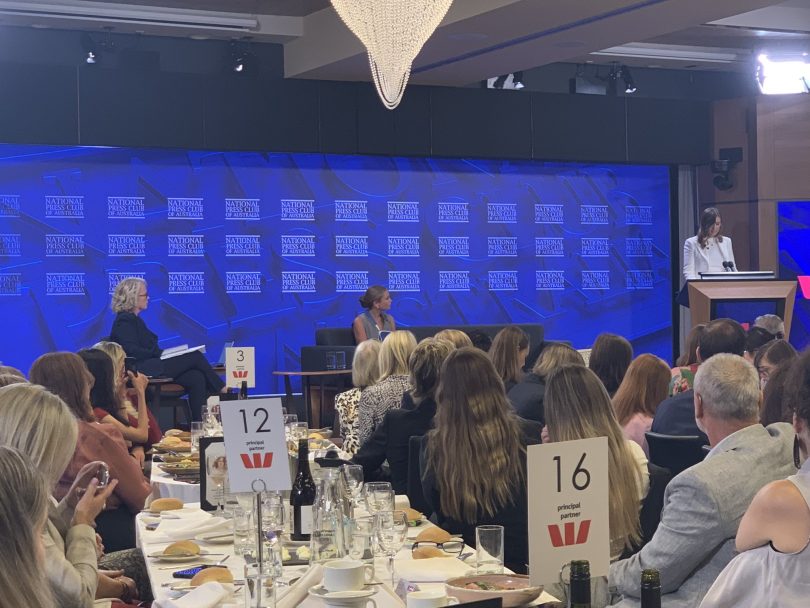 In her address to the National Press Club this week, Ms Tame commended Mr Rattenbury for introducing the legislative changes to the Assembly after her advocacy last year.

“We still have so much work to do,” she said.

The ACT is one of four jurisdictions where the crime is still called either “maintaining” or “engaging” in a sexual relationship. The other jurisdictions are South Australia, Queensland and the Northern Territory.

Mr Rattenbury encouraged other states and territories to also move quickly on the issue, given it’s a relatively simple technical legislative change.

“It’s been spelt out to us in black and white terms the difference this can make to victim-survivors,” he said.

A number of other measures will also be introduced with the Family Violence Legislation Amendment Bill 2022.

Mr Rattenbury said the package of reforms intended to do two things.

“We want to make very clear and reinstate that there is no place for violence in family and relationships and this government condemns it and we want to make the process easier for victim-survivors,” he explained.

As well as legislative changes, work is ongoing to make the criminal justice system more easily accessible by victim-survivors.

“Victim-survivors have shared their lived experiences and, too often, the criminal justice process is a re-traumatisation that victim-survivors endure,” Mr Rattenbury said.

The bill also sets out an aggravated offence scheme that will expand penalties for certain offences when committed in the context of family violence.

Some aggravated family violence offences will also be added to the list of offences that would disqualify someone from obtaining a Working with Vulnerable People check.

It will also limit cross-examination on the contents of Victim Impact Statements, including in other proceedings.

Lastly, the bill will create a legislative requirement to review the Family Violence Act 2016 every three years.

“This will be an evolving space of the law, and I think it’s fair to reflect that as these issues are getting greater public ventilation, as they are better understood, we will need to continue to evolve the law to reflect this,” Mr Rattenbury said.

Opposition Leader Elizabeth Lee released an exposure draft bill last year under which family violence would have been made an aggravating offence.

Ms Lee welcomed the Attorney-General’s bill but said it would be considered on its merits.

“It is vital that our laws and legal system are set up for the purpose of preventing and eliminating domestic and family violence,” Ms Lee said.

“Unfortunately, our existing laws do not adequately recognise the evil that is family violence and, as such, there is a concerning disconnect between what results from our court system and what the community expects.”

The bill will be referred to the ACT Legislative Assembly Committee on Justice and Community Safety.

If the committee decides it doesn’t need to be examined, Mr Rattenbury hopes the bill can be debated at the end of March or the beginning of April.

As I recall from their speeches, Ms Tame and Ms Higgins were seeking action from the government on a broad issue, not words about “aren’t all those people bad”. Anyone with an objective view could see the extent to which this issue in particular (there are others) has been met with words and promises but little in the way of deeds (until pushed into it).
Ms Tame wants action, and some people seem to think that must by definition be anti-government, presumably on the basis that the government does not like its inaction noticed over its flowery words. It is only after this pressure that the government stopped sitting on the Jenkins review, as it had for about a year, creating a cross-party task force to examine implementation of the 28 recommendations.
If you think that is a bad outcome or that Ms Tame was merely self-indulgent rather than providing impetus then I leave others to judge your actual objectivity.

Ms. Tame may have spoken about how many people feel. However, her egotistical and shameful presentations since she was given the dubious honor of “Australian of the Year” have left a sour and unresponsive taste to the average punter. Maybe if she was not so smarmy and relayed her feelings better, she would not be considered as a foolish girl looking for her 2 minutes in the sunshine.

Would the person who hurt Trevor’s feelings please stand up. You will not be allowed to play with crayons for the rest of class.

There was a noisy Grace/Brittany cheer-squad at the NPC speech but my impression was that the body English of most people there reflected exactly what Trevor Willis says.

Apart from your puerile comment phydeaux, no one else is giving Ms. Tame the time of day.

Hey Trev, you sound like you have a “Girl Problem”!!!

Totally agree Trev. As Australian of the Year she got an audience but with her way of saying things she has pee’d more people off. I’m not sure the Criteria for Aus of the Year but she should not be politicising the position. It’s blatantly obvious she is anti Liberal which does her no good and she’s hard to take seriously. She should name the person who called her if it did happen.

My goodness Elf, there are accusations of rampant sexism in the Liberal Party, alleged grooming, violence and sexual assaults by senior government ministers and Grace Tame shouldn’t be politicising her grievances! You’re also suggesting that she has the audacity to be anti-Liberal claiming that it is not good for her!!! We have another victim alleging that she was raped in a senior Liberal government ministers office and was called a “lying cow” by this minister. Tell me Elf, how would you feel if this was a family member – your mother or sister?

I think it it was initially revealed that Ms. Higgins had been drinking a lot before the alleged incident but this has not been mentioned since her partner on that night has been charged with sexual assault. Very unbalanced reporting which has led to this:

Hi Elf. Here is a list of AotY recipients. https://en.wikipedia.org/wiki/List_of_Australian_of_the_Year_Award_recipients.
You may notice a few advocates for causes among them. Whether someone considers their advocacy “politicisation” appears to depend on the extent to which they disagree.
CR, you appear to have glimpsed something through the fog without quite seeing its form. Yes, Trevor’s vacuous comment implied far more about his little fears and prejudices than about his supposed subject, assuming it was not merely trolling.

So what you’re saying CR is that because she was drinking she deserved it?

Jack D,
The same types of accusations have been made about ALP and Greens members yet Ms Tame only focused on one side of politics. Weird huh?

To anyone with a sense of objectivety, she clearly harmed the cause she was trying to further by her blatant political grandstanding. This automatically alienates a large part of the electorate regardless of the merits of any change she wished to make.

I’m sure some advocates feel really good to see her in action but those who actually care about progress would be horrified.

You read what I said didn’t you? She didn’t “deserve it” (whatever you mean by that) but the accused certainly doesn’t deserve the label that he is already guilty, either and that is what I was trying to convey.