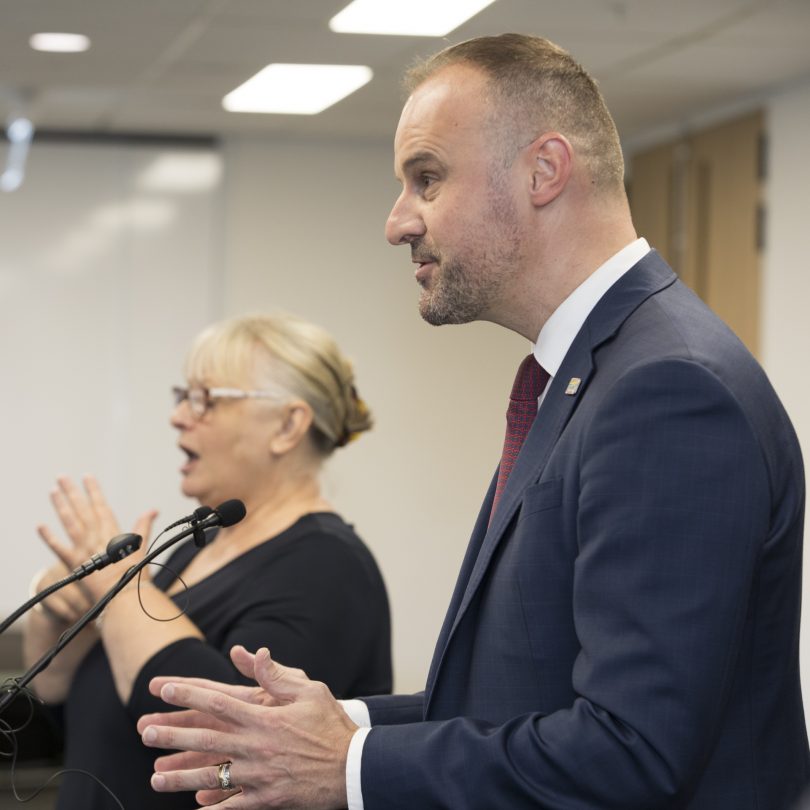 Chief Minister Andrew Barr says he is expecting the Territory’s unemployment rate to double to 6 per cent in the coming months. Photo: Region Media.

March’s unemployment and underemployment rates have remained steady in the face of the COVID-19 pandemic, but the Australian Bureau of Statistics (ABS) has said a more accurate representation of the economic impact will not be available until April’s figures are released.

However, the reference period covers 1 March to 14 March, a full week before social distancing rules and additional shutdown measures and restrictions were brought in on 21 March, and the shutdown of non-essential services on 22 March, the ABS said.

April’s figures will cover 29 March to 11 April and will be released in the middle of May.

A total of 1,000 people lost their jobs and the trend data shows an uptick in the total number of unemployed people, which now sits at 7,500.

The Commonwealth Treasury said unemployment could have risen to as high as 15 per cent had the $130 billion JobKeeper package not been announced.

To date, around 1 per cent of people who have applied for the JobSeeker payment are from the ACT. Mr Barr said this indicates that around 6,000 extra Canberrans are out of work, although Canberra is in a better position than most cities.

Canberra’s large public service sector will largely help it weather the worst of the incoming storm as big government policy means bigger governments, according to a recent report from Deloitte Access Economics.

HiddenDragon - 8 hours ago
Difficult to see anything more than token efforts at decentralisation in future, but video conferencing and working from home... View
Food & Wine 27

stargazer - 11 hours ago
I agree. It’s an old fashioned bakery and the fact it’s totally family run is fantastic. They are few and far between now... View
stargazer - 11 hours ago
Stopped in and got my buns today - they were worth the drive! But I Wish I could get them on my side of town! Kids loved them... View
Sonya Curran - 15 hours ago
I'd love to! Have never been! View
News 1

chewy14 - 12 hours ago
Hardly a surprising result, the government's relative silence on the issue and the budget allocation made it pretty obvious t... View
News 12

Trish O'Connor - 14 hours ago
is there a phone number to call each morning to check whether the balloons will be flying. View
Food & Wine 1

buttercup - 15 hours ago
Good on you Anna. Fresh ideas, reinventing yourself and your menu as the years roll by, delightful fresh food, and awesome cu... View
Community 17

Connie Senkoe - 17 hours ago
any body heard of Librafg with Nick Gibson. Is it a scam too? View
Community 24

keek - 20 hours ago
Yeah, I'll stick to teaching my kids that the internet is a playground, and nothing said on it is to be taken seriously. This... View
show more show less
*Results are based on activity within last 7 days

@The_RiotACT @The_RiotACT
Braidwood’s beautiful boutiques, eclectic antiques & gorgeous galleries are a shopper’s paradise. We’ve put together some inside info about what you can discover on the treasure trail https://t.co/qDNKXbDda4 (8 hours ago)

@The_RiotACT @The_RiotACT
Once known for its huge freakshakes, Patissez used lockdown as a chance to reinvent itself and forge an exciting new path https://t.co/vQDR61q0DX (9 hours ago)

@The_RiotACT @The_RiotACT
Looking for the perfectly located family home? Don't go past this four-bedroom property in Higgins - it's ideal for entertaining + ready to move into https://t.co/75M0QEbCnL (10 hours ago)