ActewAGL putting on a BBQ for the Toast of Canberra 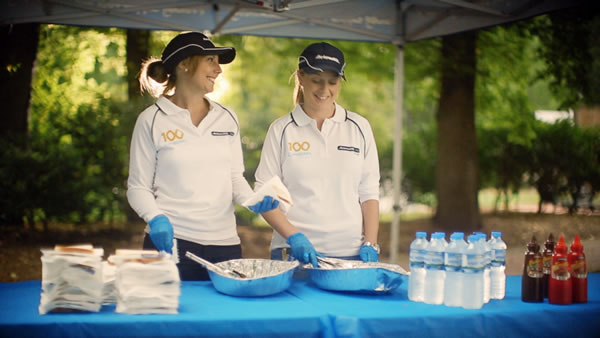 ActewAGL have sent out word that they’re putting on a do on City Walk for the exact birthday of Canberra on 12 March:

ActewAGL, Principal Partner of the Centenary of Canberra, invites Canberrans to join in raising a toast for Canberra’s birthday at a free barbecue outside the ActewAGL Assist store on City Walk in Civic from 11.00am to 1.30pm on Tuesday 12 March 2013.

The Canberra Day Toast barbecue event will kick-off with a live screening of the Foundation Stones ceremony at Parliament House, in which the ACT Chief Minister Katy Gallagher will raise a glass and toast Canberra.

ActewAGL Director Marketing and Corporate Affairs Paul Walshe said, “As Principal Partner of the Centenary of Canberra we’re pleased to put on this event, which is the ideal way for our community to raise a glass in unison to celebrate Canberra’s 100th birthday as a city.

“Local sporting celebrities will also attend the barbecue to celebrate with the community.”

Canberra residents who share their birthday with the city are also encouraged to come along to the barbecue to celebrate the special day, following a Centenary of Canberra campaign to find as many locals as possible born on 12 March.

Interesting that that chronically forgotten wasteland, Belconnen, seems to have been overlooked yet again. No local events there, it seems. (At the risk of sounding seriously paranoid, one has to wonder if this is part of ACT Govt’s ongoing attempt to allow local shops to stagnate into a state of collapse, to be replaced by 8-storey apartment blocks.)

The 12th is a work day, and the majority of peeps will be in town. The event is basically across lunchtime.

Cheers,
The Centenary of Canberra team

Be nice if they recognised Canberra isn’t just Civic and had this event in all the town centres ie Belco, Woden, Tuggeranong, Gungahlin etc.

I agree, they should be more small community focused with this event. For example, they should simply give me some snags and a case of beer so I can celebrate with a Canberra day BBQ at home.

Be nice if they recognised Canberra isn’t just Civic and had this event in all the town centres ie Belco, Woden, Tuggeranong, Gungahlin etc.

Civic is the centre of town. So the sensible place for it.

Ah Toast. I met some really interesting characters there.

My dad always said that the best way to get Canberran’s out is to put on free food.

Oliver Raymond - 2 hours ago
Charles Godworth It was another Seselja ambush. There was no need for the urgency. Not enough time to find a strong alternati... View
Natalie Gresham - 16 hours ago
🤬 the Liberals never learn do they. Let's just hope he gets voted out 😂😂😂 View
Christopher Goyne - 1 day ago
great news View
News 29

Ian Hubbard - 7 hours ago
Remember the Ainslie bowling club. Great place to catch up with old friends for a beer and a bowl. Now residential. Community... View
Leah Dwyer - 17 hours ago
Yeah, braddon oval as a dusty car park. Those were the days. View
Ian Hubbard - 17 hours ago
Change is not scary but managing a community activities centre that brings the Nth Ainslie community together requires active... View
Community 4

Ben Roberts - 9 hours ago
No Anita but Romy is keen to travel up for it. She'll do anything for a book bargain. View
Anita Godley - 16 hours ago
Ben Roberts are u moving back here? View
Ben Roberts - 19 hours ago
What dates next year for Northside? View
Business 3

Peter Tregear - 14 hours ago
Yes, it does say something about the current government's national priorities, but it also says something about the Universit... View
Rauny Worm - 17 hours ago
There will sadly be a negative flow-on effect for the entire creative sector , and not just in Canberra. View
Opinion 14

@The_RiotACT @The_RiotACT
CBR singer-songwriter Hedy Blaazer celebrates the release of her first studio EP this week. All the details of her show & plenty of others are in our latest #GigGuide https://t.co/qFsua3pban (2 hours ago)

@The_RiotACT @The_RiotACT
After months of work by crafters worldwide, the Remake Christmas project is set to send more than 100 decorations to Cobargo and Quaama https://t.co/Fbnf4wE4rD (3 hours ago)

@The_RiotACT @The_RiotACT
Hot in the City: The Merchant’s Feast delivers a deli directly to your door https://t.co/ARj4mTkr7u (4 hours ago)