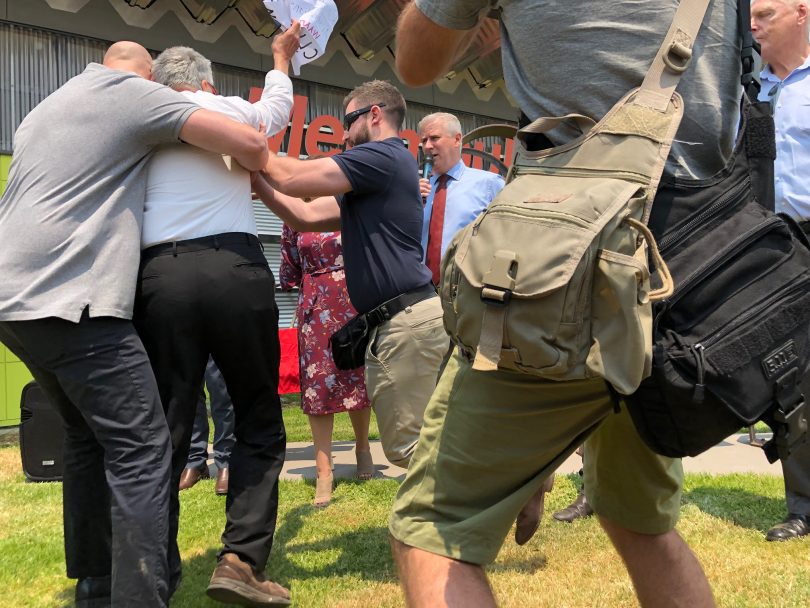 There to open the new terminal building at Merimbula Airport with Bega Valley Shire Mayor Kristy McBain and State MP Andrew Constance, the Nationals leader was mobbed, heckled and questioned by around 40 protesters.

Shortly into his opening remarks, Mr McCormack was rushed by a number of people chanting slogans and carrying placards. 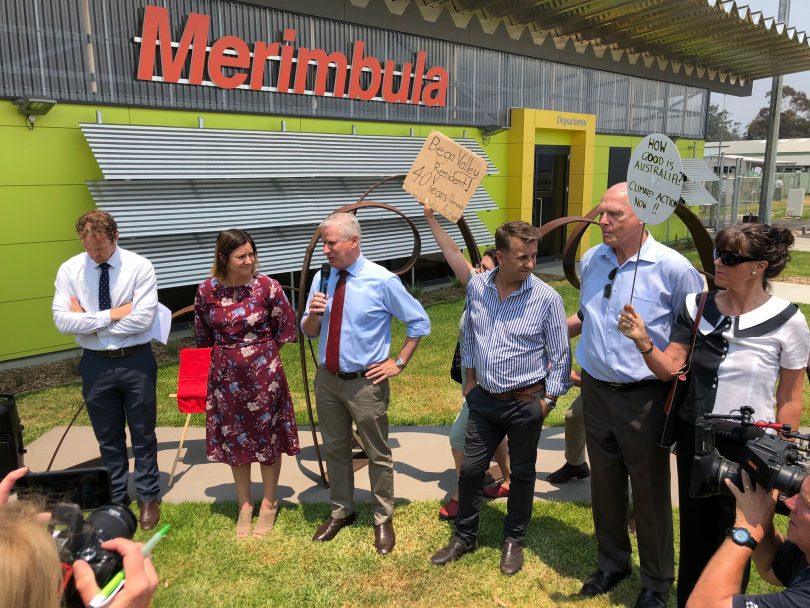 Mr McCormack tries to address the crowd at the opening of the new airport terminal at Merimbula.

The Acting PM’s security detail was quick to respond, manhandling a number of protesters out of the new terminal building and locking the doors behind them. Some of those wrangled away from Mr McCormack were visibly shaken and upset by the experience, suggesting the physicality of the response was over the top as they were shown the door. 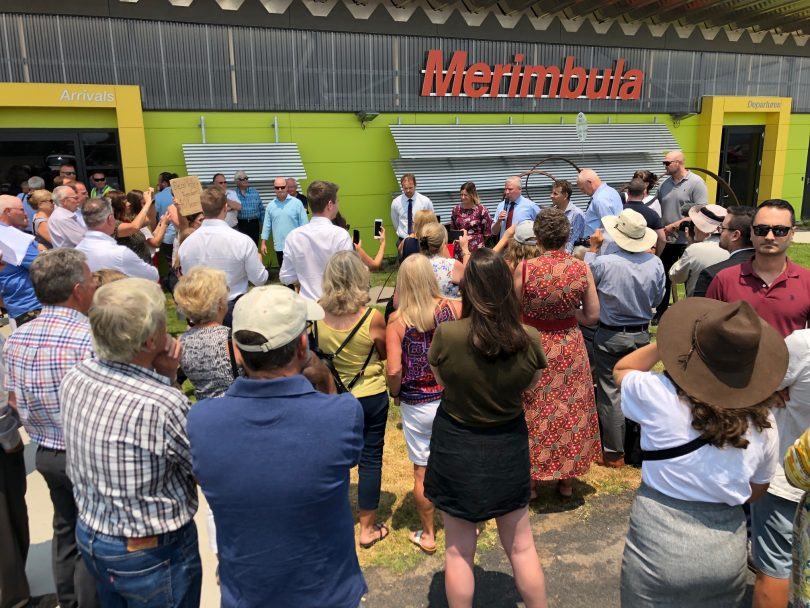 The crowd that gathered was made up of around 40 climate protesters and supporters of the airport redevelopment.

Quizzed by the national and local journalists gathered, Mr McCormack brushed aside suggestions that Prime Minister Scott Morrison had deserted Australia during a bush fire crisis by choosing to holiday with his family in Hawaii. 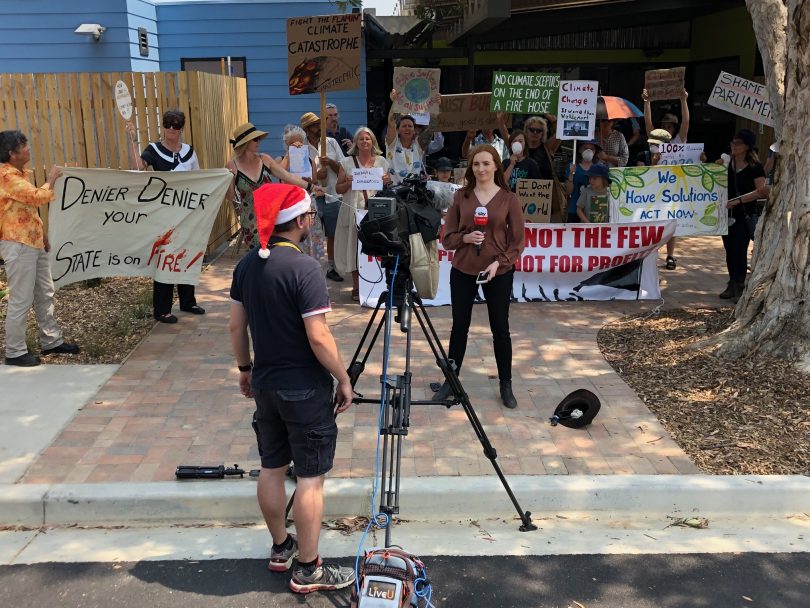 Asked about the future of agriculture and a report from government commodity analyst ABARES that shows some annual farm profits have fallen by 35 per cent, or $70,900 a year because of Australia’s warmer and drier climate, Mr McCormack’s response was upbeat.

“We are working to build agriculture from the $60 billion sector it is to a $100 billion sector, and we will go on building that with the right policies,” he said.

Posted by About Regional on Tuesday, December 17, 2019

“We have members who lost their homes on Black Saturday, the Canberra fires, the Tathra and District fire, Yankees Gap and more. We are homeowners, firefighters, retirees, business people and farmers,” the letter reads.

“Mr McCormack, please don’t wait until the fire is at your own door before you recognise what is fuelling this situation. We invite you to work with us towards serious reductions in greenhouse emissions, adequately resourcing fire and emergency services, assisting communities to become more resilient in the face of drought, fire, flood, storm and coastal erosion.”

Protesters chatting along the fence line as Mr McCormack bordered his Air Force jet were left unconvinced that the Nationals leader recognises the influence climate change is having of the tense bush fire situation across the state. 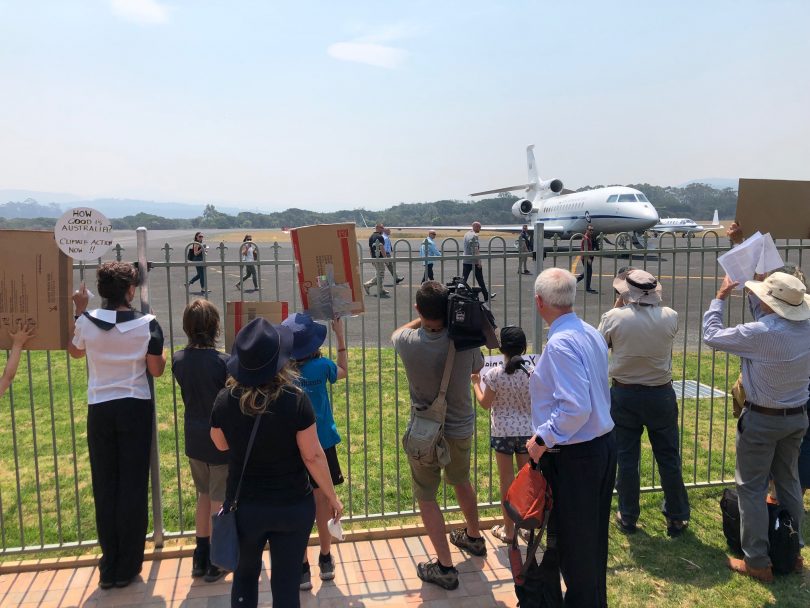 Mr McCormack leaves to the sounds of protesters chatting.

Since flying is so bad for the environment, those protesters should show some leadership of their own and boycott the local airport. Lead by example!

We need to take these disgraceful morons on. Well done Merimbula. We need to make it untenable for then to lead without dramatic climate action!

that's not the acting PM, that's a burning pile of horse manure.

Hans Dimpel hope he doesn’t explode and start a fire...

““Mr McCormack, please don’t wait until the fire is at your own door before you recognise what is fuelling this situation. “

What planet do these protesters live on? Everyone and their dog knows that forest litter buildup is the only “fuel”.

Once again, "Macquarie Street talks to Canberra". Sorry deputy PM, don't you mean Sydney talks to Capital Hill ? For goodness sake, stop this "Canberra" diatribe! We Canberrans are sick of it! And check out the body language of the NSW Transport Minister and local NSW member , and the puppet Senator would-be Jim Moylan.

Astonishingly, McCormack, the dedicated coal salesman and emissions vandal claims to be a farming advocate.

only because people that vote for his party are stupid.

Goes to show how angry Australians are with this pathetic govt! Best they start doing something about climate change!

Opportunists using any avenue they can grab to push their mantra.
Give it a rest please, you do your cause harm by being way too overt.

Morrison, while apologising if anyone was offended by him fleeing while the country burned, said littleproud was acting PM. Out of touch? Liar? Gutless? No moral compass? Make your own judgement.

Aww….They rushed the acting PM, were restrained and ejected. Too harsh? Plenty of other countries that would have got them shot in.

Carl Ostermann - 24 minutes ago
In the nineties, it was adventurous gnomes sending their owners... postcards from all over the world View
News 30

How to lose a Prime Minister in 10 hours

Senator Jim Molan announces he has an ‘aggressive form of cancer’