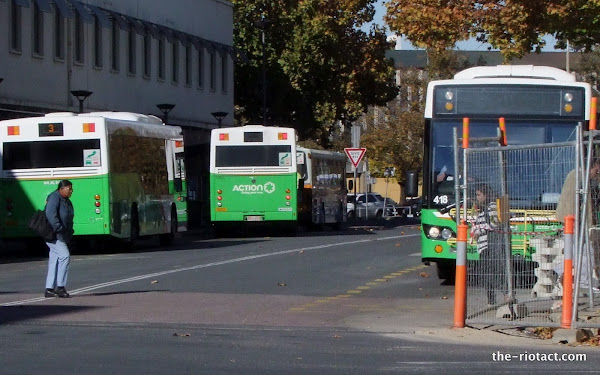 Chief Minister Gallagher has announced the latest bus timetable which takes effect on 28 May.

— new services, Route 55 on weekdays and Route 955 on weekends, will connect Forde and Bonner to Gungahlin Marketplace

— weekday and weekend bus services to Casey and Crace

— more direct services to and through Fyshwick

— community Route 73 and 74 redirected to travel via Catchpole St to cater for aged residents in Macquarie.

The new timetable is on the ACTION site.

I have no idea why they had to drastically change the weekend route time tables for Weston Creek- the 927 leaves Woden on the hour instead at 20 past the hour, and leaves Cooleman Court at eleven to, instead of five minutes to the hour. It totally screws up my travelling schedules.

The problem with the 927 isn’t with the timetable per se, but that the time tables are totally unsuited to how fast the buses actually travel. On the timetable they’re forced to travel at a crawl, when in reality they can either be five minutes ahead of time when they get to Fisher shops, or lagging behind, because the bus drivers deliberately delay leaving on time because of the slowness of the time table, and then needing to pick up more people than expected.

The better way to deal with it is to retime the route, and making the timetable better reflect reality.

Damn. I’m pretty annoyed that the last bus 3 will now terminate in the city and now it has odd frequencies between 20 and 40 minutes… Would it be worth complaining to action about the last bus?

Complain, but also check what other routes might help you connect. I hate to push Google products (die hard Apple fanboy here), but Google Transit is worth getting to know 🙂

Damn. I’m pretty annoyed that the last bus 3 will now terminate in the city and now it has odd frequencies between 20 and 40 minutes… Would it be worth complaining to action about the last bus?

New timetable is scheduled to go live at the appropriate time on Google Transit and the TransitTimes app for smartphones.

Hmmmm – situation normal – no ‘improvements’ noted in my routes..

The new Sunday service seems to have the same number of services as the old service but the ‘window’ for first/last travel on that day has been reduced by an hour and five minutes….wtf??

On the rare days I do catch a bus, if i wasn’t at woden to change by roughly 6 pm I’d have an hour wait if i missed the second bus.

Looking at the new timetable I would now have an hour and 25 mins wait. Oh yay.

Both the bus routes I catch in Belconnen have been reduced in frequency from every twenty minutes during peak times to every 35 minutes. Boo.

I seem to remember the last timetable change was meant to improve efficiency, but I still find myself waiting for buses that are temperamental at showing up. At least Action have a twitter feed now, so the true magnitude of the bus shortage is available for everyone to see.

Margaret Freemantle - 29 minutes ago
Colette Robinson and bells!! View
Colette Robinson - 4 hours ago
As both a pedestrian and cyclist on shared paths, I am so sick of the arrogance, double standards and behaviour of certain cy... View
Peter Major - 4 hours ago
get then off the road would be progress View
Property 31

Carly Maree - 2 hours ago
I love how people act surprised when this city has some of the worst crime I’ve ever encountered? I lived in Sydney for 8 y... View
theroundone - 13 hours ago
Who's getting punished, though, asides from law abiding rates payers in this city? A racial or sexist epithet is treated more... View
News 1

HiddenDragon - 5 hours ago
The report aired on ABC Canberra news tonight about the devastating impact of the hailstorm on important crop resilience rese... View
News 12

Commuters climb on board petitions to vent against new bus network