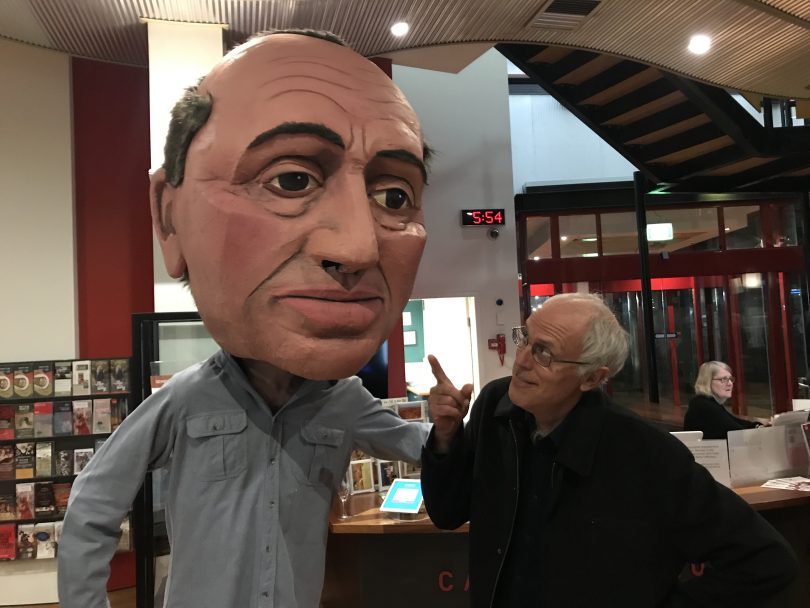 There were past protestors inside the Canberra Museum and Gallery and there were current protestors outside for the launch of CMAG’s Activism: Forces for change in Canberra exhibition on Friday night (12 July). Then some inside protestors went outside, and everyone came back inside with their protest signs – to loud cheers.

The exhibition, curated by Rowan Henderson, records a long history of energetic local protest and covers everything from the women’s rights, same-sex marriage and the environment, to saving Glebe Park and spelling reform. 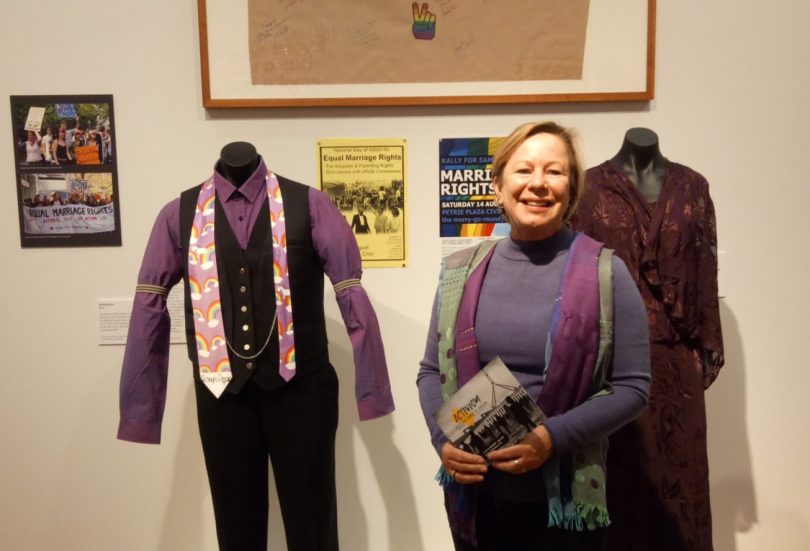 That was the particular passion of Harry and Eva Lindgren, whose daughter Judith says they typified the socially engaged, activist post-war Canberran. “As a child I spent plenty of time with them on the median strip opposite the Lodge, protesting against Vietnam,” she recalled.

Harry Lindgren was a conscientious objector who saw out his war service on the Perth docks. A multi-linguist and expert on recreational mathematics, he and Eva were galvanised by the plight of adult migrants struggling with written English. So they embarked on a lifelong campaign to change the likes of “said” to “sed” and “through” to “thru”.

“My parents took themselves off to the Reid Tech so they could produce pamphlets on a second-hand offset printer in our front room,” Judith says.

They garnered support from the likes of Sir Mark Oliphant and Sir McFarland Burnett, and Judith suspects Harry and Eva would have been quite chuffed by today’s text speak and emoticons. “They had very active, fulfilled lives,” she says. 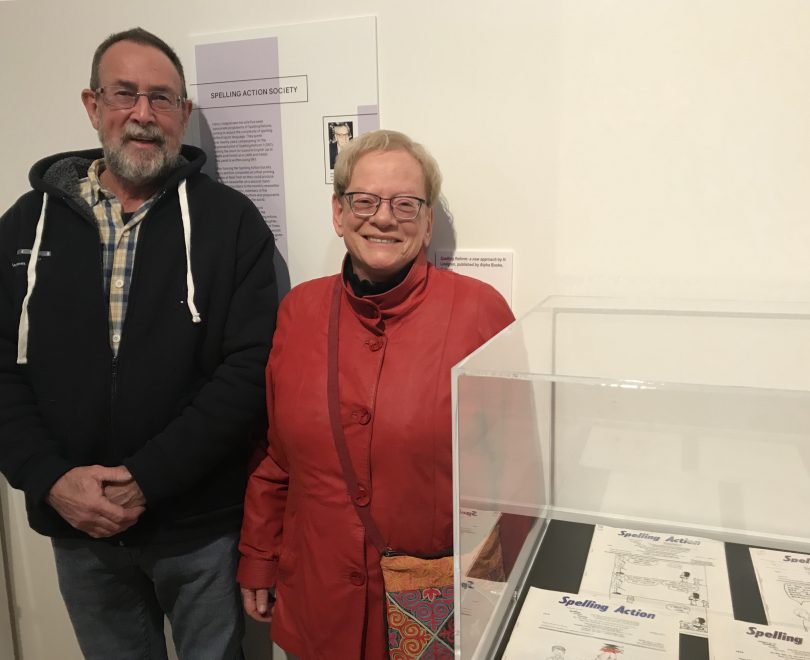 So did Di Riddell, who spent 30 years running the ANU Student Union, doing everything from making bail for student protestors to introducing condoms onto the campus. “Mum and Dad were both very community-minded and interested in helping people,” son Chris Riddell says.

“One in three girls were getting pregnant at the time, which meant many were missing out on the chance to finish their educations. Mum was ahead of her time in recognising that sex could be for fun, not just procreation. She brought the Corin Huts down for low-cost accommodation, she was a marriage celebrant, a JP, she set up the ANU arts centre with Dale McKelvey.”

When she died recently, a couple of those protesting students, Justice Richard Refshauge and former Canberra Times editor Jack Waterford both spoke at her funeral. 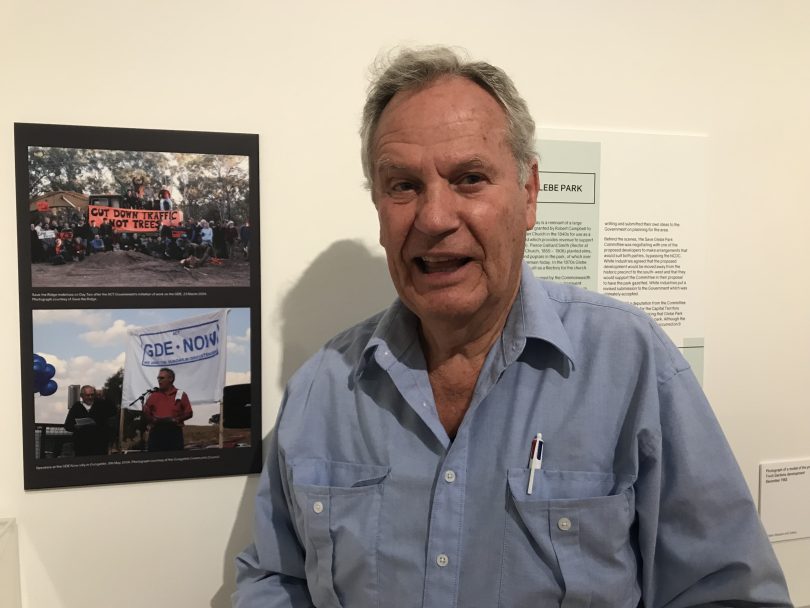 Peter Coggins with a photo of himself (red shirt, bottom) protesting for the Gungahlin Drive Extension. Photo: G Jacobs.

More recently, Peter Coggins (of Coggins Bakery family fame) got fired up by the Gungahlin Drive Extension which engendered vigorous local disagreement. “There was only one road in and out when I moved there,” he says. “The population grew to 40,000 and we were just about held hostage. But the ACT government had failed to get legal access to Crown land, so they couldn’t build the last stretch across the back of the O’Connor Ridge.”

Opposed by people tying themselves to trees to save the route, Coggins and the Gungahlin Community Council backed the eventually successful High Court challenge to make the GDE possible (many anti and pro-GDE campaigners later united behind light rail). 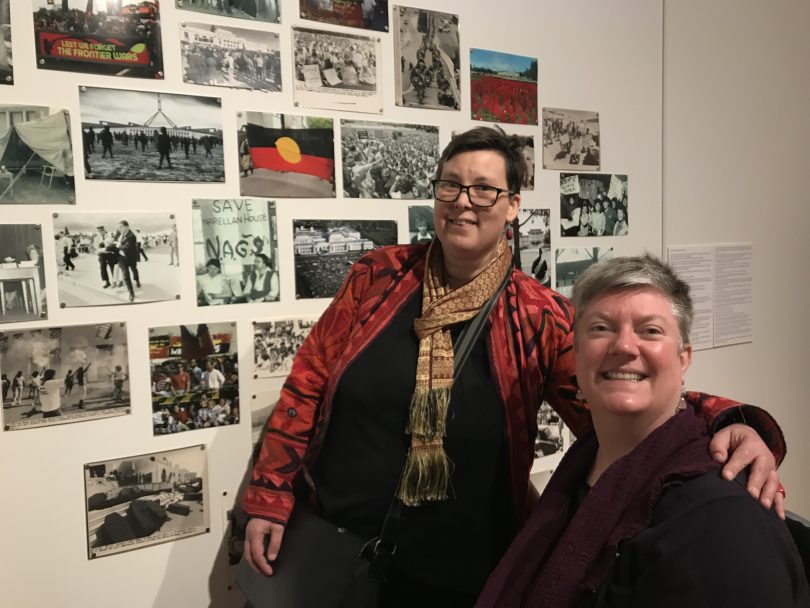 Yen Purkiss is on the autism spectrum and was stirred to action in 2012 when meeting a young autistic man who was “so disabled by other people’s negative views and expectations about what he couldn’t do – and it devastated me. I thought this is not what the diagnosis should be, it should be a liberation”.

Yen has since written seven books, done a TEDx talk and presented all over the world on positive thinking about cognitive disabilities. “I’m extremely passionate and will do this for the rest of my life”. 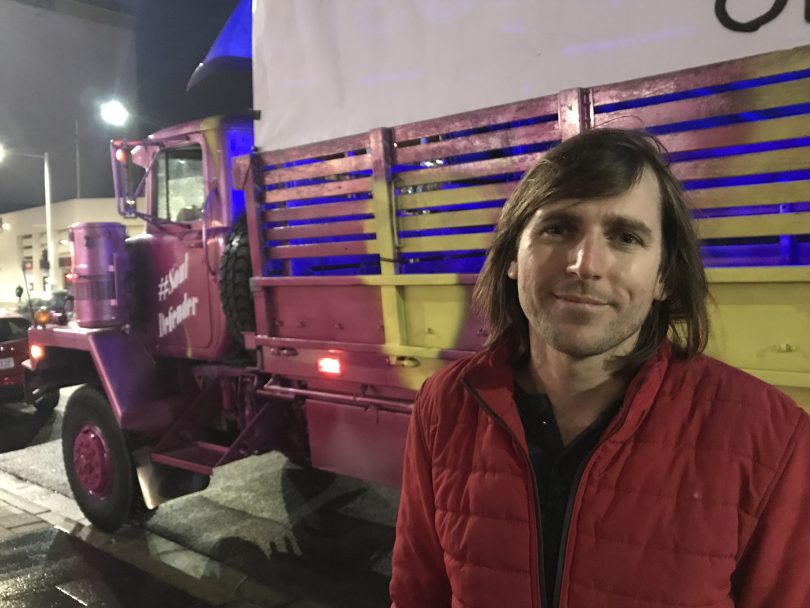 Outside, Music ACT protestors were projecting a counter onto the Assembly’s exterior. It tallies the days since the February 2009 Assembly report that identified the impossibility of co-locating apartments and hotels with live music venues, according to president Dave Caffery.

“In 2019 we still don’t have any action on this, but apartments and hotels are being approved that will shut down the music centre of this town because people can complain about noise levels when they have their windows open. That’s enough to close down a venue.”

The counter will remain on the Music ACT website until there’s legislative change, the Let Music Live campaign says. 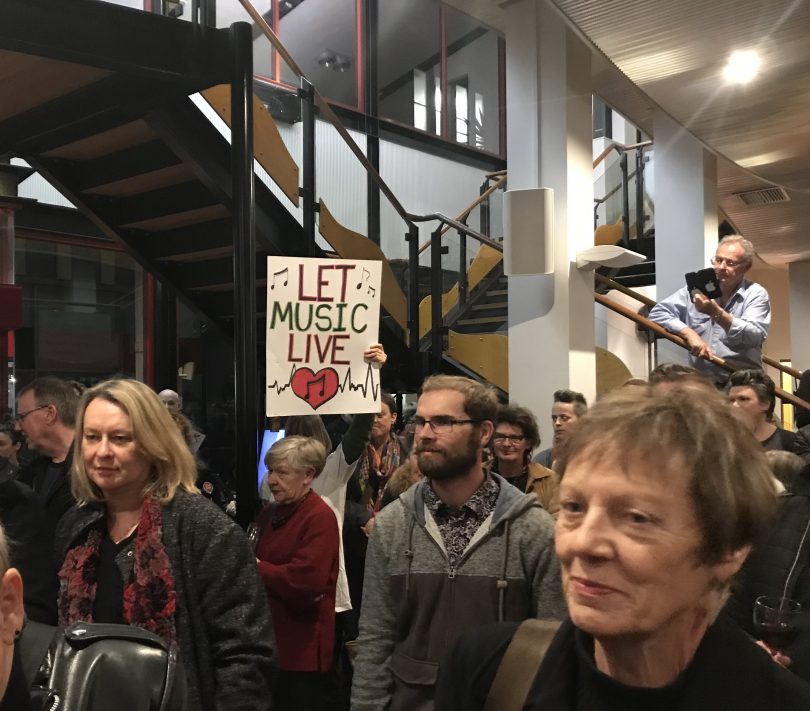 As Arts Minister Gordon Ramsay said at the launch, it all typifies the energy, enthusiasm and community dedication that’s intrinsic to Canberra’s character.

“There is no point at which you can say you’ve done enough,” says Yen. “We have to keep working to make a difference. Negatives come, there are setbacks and difficulties, but without activists, what would happen?”

Activism: Forces for change in Canberra is at Canberra Museum and Gallery until November 2.

And we need activism even more now with #ClimateEmergency

Gavin Bradley - 42 minutes ago
Mary-Ellen Bradley not us this is only ACT gov View
Kerry Apted - 6 hours ago
excellent! View
Samantha Freeman - 8 hours ago
Tell that to the Federal Govt. No one has moved to a hybrid model, only state Govt View
Opinion 16

Sofia Zivkovic - 48 minutes ago
No point, comp is getting worse each year. View
Tim Mitchell - 8 hours ago
The joint A-Leagues men and women trophy really strengthens Canberra's bid. Would be strange having Canberra as the only team... View
Community 142

Ota Save - 3 hours ago
Sue Sutton No worries Sue. Happy to help ❤️ View
Sue Sutton - 3 hours ago
My Mum has wonderful neighbours who have been helping keep her lawn in check. Thank you Ota and family xx... View
Bill Gemmell - 4 hours ago
Barbara Eglitis I was wondering how long it would take. Seriously, I had the Fowles St Park project in Weston in mind. Sugges... View
News 33

kenbehrens - 4 hours ago
A few years ago when we were visiting our son in Sydney, there were blankets and items of clothing under shelter on the stree... View
jwinston - 4 hours ago
harcm said “tim_c – what a load of rubbish you talk. What if your schooling was completely disrupted by domestic violence... View
Acton - 4 hours ago
The money you are giving out of misplaced guilt to a street beggar is just funding their drug, smokes and/or booze addiction.... View
News 1

Linda Stapleton - 11 hours ago
I may no longer be a young woman but can I just say I have yet to meet one woman who has NOT been sexually harrassed or assua... View
Property 5

Tim Flederis - 11 hours ago
Josh Reid where you at ? View
show more show less
*Results are based on activity within last 7 days

The heart of Queanbeyan will be transformed into a landmark housing, retail and entertainment precinct by Canberra developer Village Building...
Community 142

There's grass, grass, everywhere and not a mower in sight, at least according to the many Canberrans who detailed their...

@the_riotact @The_RiotACT
Summer has arrived in #Canberra, which means this week's Ken Behrens #Quiz is all about cricket, ice-cream and music, plus a few other tidbits such as current affairs, ACT trivia and Miley Cyrus https://t.co/toISNbH9dm (11 minutes ago)