Adam Hadley moving to Brisbane for a bit 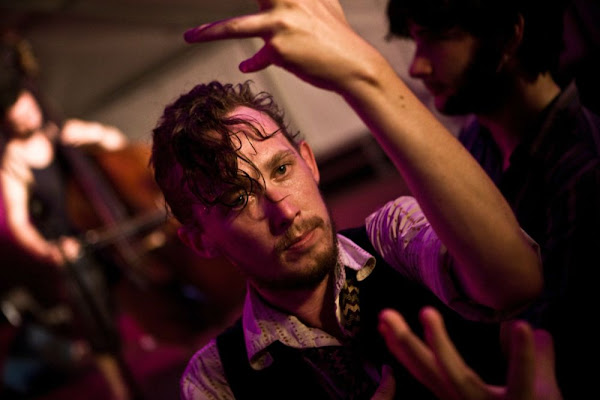 Last night I was listening to Brisbane community ration 4ZZZ’s chat to slam poet Darkwing Dubs mostly to hear what they had to say about Canberra’s Bad!Slam!No!Biscuit! poetry slam.

So I was a bit surprised to learn from this unlikely source that Canberra’s champion of the spoken word, Adam Hadley (aka Hadley, aka Jacinda), is moving to Brisbane.

Talking to him last night he’s not seeing this as a permanent move as much as “a bit of an adventure” and at the moment he’s talking about it being a six month stay.

But the temporary has a funny way of becoming permanent (and vice versa).

So safe travels Hadley and I hope Canberra sees you back here sooner rather than later for my own selfish entertainment needs.

[Photo from Asher Floyd’s Twenty Photos of One Person series, you can see more of Asher’s work on his photoblog]

Also a good reason to remove the prohibition against cloning humans. The he could leave behind one Adam dedicated to doing Mr Fibby gigs and all the other stuff (a list too long to write). Possibly a clone would be a better Noimporant anyway.

This is the first reason I’ve ever seen to move to Brisbane.

This is the first reason I’ve ever seen to move to Brisbane.

All the best man…

Is he random? Yes, look at his clothes.

Is he moving to Brisbane? Yep.

The whole article is about it being reported first on Brisbane radio.

so you’re still about as clever as when you started.

Is he random? Yes, look at his clothes.

Is he moving to Brisbane? Yep.

He should have a suburb named after him, or a wild west styled saloon.

Hadley will be missed. I think I am being very selfish here when I say that I hope his trip to Brisbane is only 6 months and I hope he continues with the organising the Majestic at the next Folk Festival. This year was brilliant.

Awesome he’ll have a blast. I moved to Brisbane a year ago. Best thing I ever did.

I still read the riot-act daily of course.

Is this the same Hadley as who posted the very funny and incisive comments in capitals on the topic about that harridan who slagged off Canberra? I didn’t realise he was famous.

I don’t think I’m breaching his privacy in saying that is indeed the same Hadley.

All the best to Hadley, without doubt the most vociferous and incredible compares we know. Hos performances at the phoenix are, were, legendary.

Oh, and if you ever get a chance to hear his poem about F*** Sean, then do. The line about the cat had us in hysterics.

hmmm. Does this mean the end of Mr Fibby as well????

A hiatus at least locally one would imagine.

Finally Relented - 44 minutes ago
Ashley Wright yeah. Know that. Lived here all my life pretty much. They don't work any more. Much better 10-20 years ago. Pla... View
Ol L - 18 hours ago
Maybe if we do nothing another government will be in power when it all blows up, so let’s do nothing in the meantime View
Ashley Wright - 18 hours ago
Sally Greenaway found the article. https://www.cityservices.act.gov.au/roads-and-paths/traffic/trafficsignals/drakeford_drive... View
News 51

@The_RiotACT @The_RiotACT
Prince Philip has been remembered for a life of service, and Canberra's carriage-driving fraternity recalls a fierce competitor who inspired a future world champion https://t.co/o0qMJekdNQ (12 minutes ago)