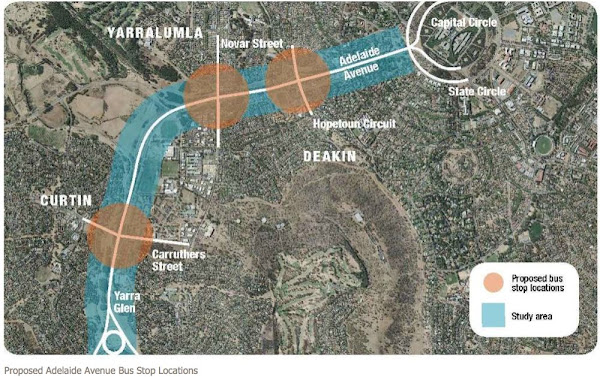 One would think that bus stops on Adelaide Avenue would be a simple enough proposition. But it certainly seems to have the keen attention of Inner Southicans.

Simon Corbell has this morning announced the release of a report on the recent consultation as the process moves forward.

“It is clear that improving public transport along Adelaide Avenue was seen as a key priority by workers and residents of the inner-south, with around 70 per cent of respondents supporting or fully supporting the government’s bus stop options on Hopetoun Circuit, Kent/Novar Street and Carruthers Street,” he said.

“Currently, residents in the area have to travel to Civic or Woden town centres on a local bus service, before taking a further journey, which can often take a lot longer than a direct service up Adelaide Avenue.”

Mr Corbell said this was the first of a two-stage consultation process and had been vital in helping the government to gain a better understanding of public transport expectations and needs in the area.

“One of the key issues raised throughout consultation was the need for additional transport and infrastructure to support the new bus stops such as bus connections, parking, bike facilities and pedestrian/cycle path connections,” he said.

“Another concern raised was the potential impact the stops would have on the existing bus rapid services and lead to overcrowding.

“These are key considerations the government will look at as we assess and develop the community’s preferred options with a second consultation process to commence in coming weeks.”

Don’t expect a call-in until after the election.

I might be wrong but I think quite a few would be surprised how many people would park and ride from a stop designated for all buses. It’s about 7km’s between Melrose Drive and the Albert Hall and about 10k’s from Weston Creek to the Albert Hall and I doubt that many want to drive into the middle of Woden to park and ride or battle for parks in the Triangle (or even see the point of busing once they are then so close to the city).

This may be great for those it saves time for, but it will add another 5 minutes to those who have to travel further, and that IMO is why people don’t catch buses. They take far too long compared to cars. Clearly people will pay for convenience in Canberra, thus cars are still popular and buses, not so.

Although as pointed out hopefully its only 1 service every 30 minutes that stops there and not all services.

While your at it… how about a small bus exchange on the north side of Parliament (maybe between Parliament on PM&C) to join the North-South and East-West (Manuka/Fyshwick) routes and get some cross-linking happening between these spokes.

There’s already been mention of studies into a Barton bus interchange as part of the review of Canberra Avenue, I think…

While your at it… how about a small bus exchange on the north side of Parliament (maybe between Parliament on PM&C) to join the North-South and East-West (Manuka/Fyshwick) routes and get some cross-linking happening between these spokes.

woo hoo! at last.My only suggestionis that not all express services stop at the proposed points. One service every half hour at peak time would be cool.

woo hoo! at last.My only suggestionis that not all express services stop at the proposed points. One service every half hour at peak time would be cool.

Futureproof - 9 hours ago
The roundabout at Monaro Highway/Isabella Drive is particularly dangerous with the height of the grass. You should be able to... View
Capital Retro - 10 hours ago
That would be tantamount to the cosseted cyclists in Canberra who get free bike tracks and then complain that they can't use... View
bigred - 10 hours ago
Of course, both sides of politics could encourage interested and motivated residents to "adopt a patch" and reduce the total... View
News 1

Capital Retro - 9 hours ago
Origin are giving 0.17c per kWh on residential solar feed in some NSW regions. If I had 8 solar systems I think I would be cl... View
Capital Retro - 14 hours ago
Organics and renewables are all part of the manufactured "green-think" idealism. Some of these people even put nitrogen in th... View
John Giacon - 14 hours ago
Hi. While ACT prices are rising, they are still cheaper than NSW - though I found it hard to find clear figures on actual pri... View
News 16