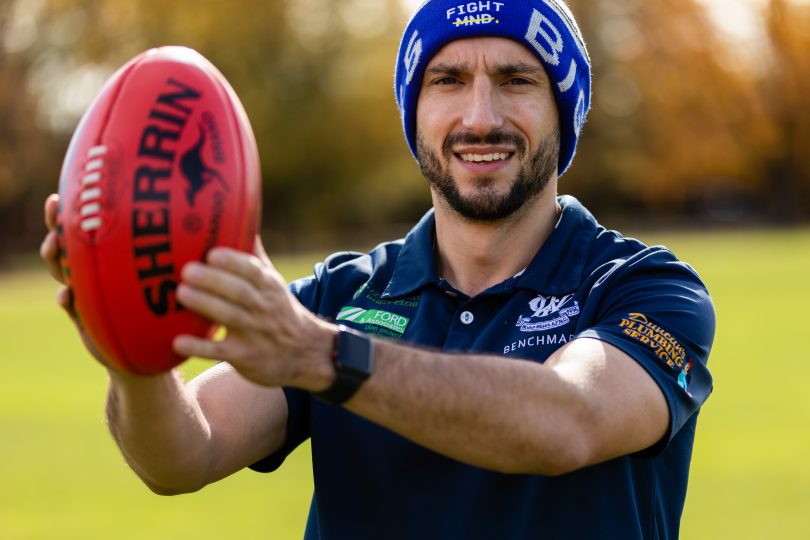 Russell Fort’s personal experience with MND adds an additional layer of commitment to combating it through the sport he loves. Photos: Daniella Jukic – wearefoundau

When Russell Fort first heard his grandmother was diagnosed with motor neurone disease (MND) in 2009, he turned to his computer and googled MND.

He had never heard of the disease; not even his family members knew what the initials meant. When he finally comprehended what his grandmother’s diagnosis meant and the doctors said she would never recover, his heart froze.

“I still remember when I was told and going to see her in hospital,” he recalled. “She was just visiting a friend for coffee and she started to slur her words a little bit so her friend took her to hospital.

“She was in the hospital for two to three days before she was diagnosed with MND. The doctors said it was quite aggressive and she wouldn’t last very long. I still remember googling MND to find out what it was.

“To see my grandmother go through MND for two years and slowly getting worse, the hardest thing was knowing that nothing could be done,” he said through tears.

His grandmother’s condition steadily got worse as the horrible and debilitating disease gradually took away the use of her arms and legs, her ability to eat and swallow and ultimately her ability to breath before she passed away in 2011.

He still has vivid memories of his grandfather, who stopped working so he could look after his wife, spoonfeeding pureed food to her. When her ability to talk was taken away, his loving grandfather bought her an iPad so she could still correspond with her family.

“Because MND slowly shuts down all your systems, she lost her ability to touch, she wasn’t able to talk and wasn’t able to eat,” he shared. “Watching my grandfather feeding her puree food, I sat there and thought why is this happening to good people?

“She was the glue that kept our family together.” 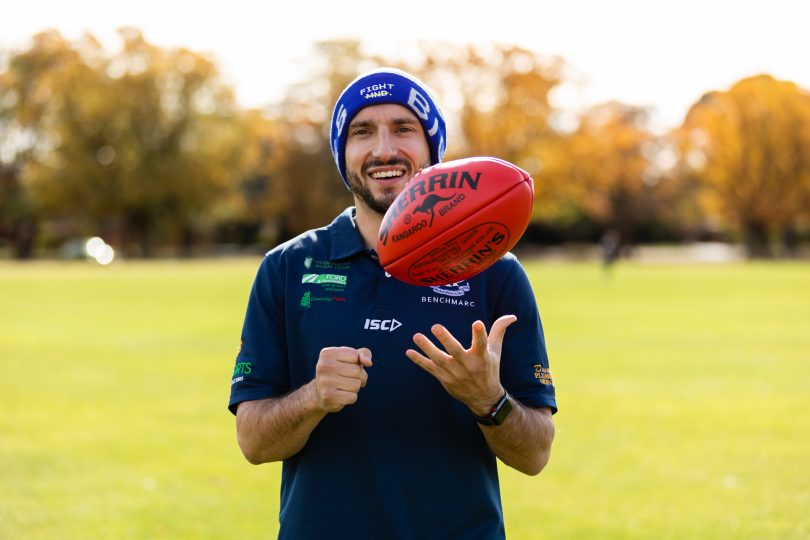 “My grandmother always wanted us to succeed and be a good family”.

Riding on the success of the AFL’s Big Freeze at the MCG, AFL Canberra hosted its own round dedicated to showing their support in the fight against motor neurone disease with its inaugural SockIT2MND round last weekend.

AFL Canberra senior competitions turned into a sea of blue in support of FightMND and the Sockit2MND Round, as all first-grade men and women’s teams donned specially designed Sockit2MND socks and beanies.

As he still grieves the loss of his grandmother eight years ago, Russell lives his life as a legacy to her, through his role as a new father and as a player and coach at Woden Blues football club.

“I live my life in a way that she would want it,” he said. “She had high expectations and always wanted us to succeed and be a good family. I have a young daughter now who is only nine months old.

“Obviously with Neale Daniher and his work with MND, it has become a disease that everybody knows about and has heard about at least and it is fantastic that AFL Canberra has jumped on board.

“All our players at Woden Blues have bought a beanie and hopefully next year, we will have specially designed jerseys to raise awareness for MND. This is something we want to own and take pride in, in any avenue we can.”

Last week, Russell surprised his dad with an MND beanie and told him about what his club was doing to help fight the disease. His father burst into tears, overcome with emotion.

“This is what this round means to my family,” Russell said.

David Hennessy - 1 hour ago
You should get the right to vote with your TFN. If the pollies can take your money they can be accountable to you. View
Daniel Duncan - 3 hours ago
Shane no that was sarcasm and its because of people like you we should raise the age to 21. View
Anthony Briscoe - 5 hours ago
Never View
News 33

Matthew Pez - 2 hours ago
Simon Adamson how is mowing your lawn at 8pm when there is still light a malicious crime? View
Robert Kearon - 5 hours ago
I would rather 8pm than 8am... not everyone is old and Karen View
Nathan Beck - 6 hours ago
David Cole it would be growing faster than they can cut it in this weather 🤣 View
News 73

Mamy Watts - 2 hours ago
Same outcome, they do nothing anyway. Look out insurance will go up with people making fake claims. View
Capital Retro - 9 hours ago
Some how I don't think insurers will cop this without conditioning the terms and conditions of their cover for home burglarie... View
Jenny Graves - 10 hours ago
Adam Rolls I presume you use your commonsense but don't actually harm them. View
News 15

William Vass - 5 hours ago
Don’t show up for a break-in but worry about scooters. What’s wrong with policing in the ACT??? View
kenbehrens - 8 hours ago
Has anyone ever been fined for smoking at a bus stop? Has anyone been fined for not wearing a mask on public transport? There... View
Nathan Lofthouse - 10 hours ago
Complete with Benny Hill music View
Opinion 80

Craig McPherson - 5 hours ago
I acknowledge the message, but to describe people who are partnered up as being 'privileged' I don't agree with. A privilege... View
Nada Krstin - 6 hours ago
Natalia Komarova yes, I have seen that, very sad indeed - it was either the couples felt 'superior' or the women in their soc... View
Natalia Komarova - 7 hours ago
When my friend lost her husband she said to some extend she lost her social circle as well. While she would catch up with her... View
Food & Wine 9

BlowMeDown - 10 hours ago
I recall my father and I taking the boat out on the western shore in the mid 1960s, where the water has yet to return. It was... View
Capital Retro - 10 hours ago
I think groundwater that enters the artesian aquifers originatesin mountainous country through rock strata. The water in Lake... View
Patrick Keogh - 10 hours ago
What percentage goes into replenishing groundwater compared to what is list to evaporation? View
show more show less
*Results are based on activity within last 7 days

@the_riotact @The_RiotACT
Looking for something to do in #Canberra this week? From #Christmas markets to Korean #films, here are 10 things to do in the capital https://t.co/FGRP1gEBLz (8 hours ago)

@the_riotact @The_RiotACT
Virgin is restarting its Canberra-Sydney service using Link Airways planes, with up to nine flights per weekday https://t.co/QGcgoaSMTa (8 hours ago)