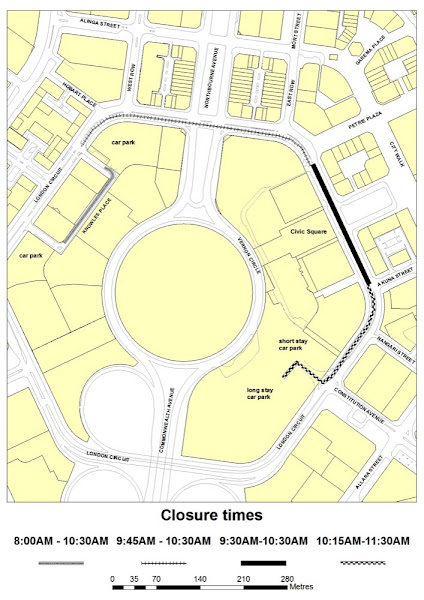 TAMS are warning that an Air Force Celebration is closing roads tomorrow:

The ACT Government would like to advise motorists and other road users that there will be several road closures in the city on Saturday 24 August 2013, between 8 am and 11.30 am.

The closures are due to a special event being held by the Royal Australian Air Force.

How awesome would it be if two or three hornets performed some aerial manoeuvres to compliment the event.

How awesome would it be if two or three hornets performed some aerial manoeuvres to compliment the event.

. . I was curious what it was for, figured others might be too.

Thank you. I was.

Don’t phuq with 28 Sqn. Steely-eyed killers, one and all.

==
Royal Australian Air Force
20 hours ago
28SQN ‘Freedom of Entry’ to the City of Canberra
Air Force’s 28 Squadron will exercise its ‘Freedom of Entry’ to the City of Canberra on 24 August 2013 with a parade through the city, beginning at 10am in Knowles Place.
28 Squadron is Canberra’s own squadron and its 30th Anniversary will be celebrated in Canberra’s centennial year with a centuries old tradition of a Freedom of Entry parade.
The members of 28 Squadron will march through London Circuit before being challenged by the Chief Police Officer to present the Freedom of Entry Scroll and then continuing their march into Civic Square.
The granting of the ‘Freedom of Entry to a City’ to a military unit is a ceremony that has very old origins. The early history of Europe shows that walled cities and trained soldiers protected citizens from marauding armies. The right of entry to a city by outside soldiers was rarely granted by authorities. When such grants were made, much ceremony was associated with the privilege, demonstrating the pride of the unit concerned, and the trust bestowed by the citizens.
Cities are no longer walled nor do they train their own armies, however, for geographical and other reasons, strong links are forged between military units and the cities where they are stationed. Today, a ‘freedom’ indicates the pride the local municipality has in its long associations with the military unit involved, and is reflected in the traditional format of the ‘freedom’ parade.
28 Squadron involvement in the Canberra community has been quite visible with its members among the crew of Air Force’s hot air balloon here in the nation’s capital. The big blue balloon has been a popular sight for residents and visitors over the years.
28 Squadron manages components of Air Force’s strategic communications capability, including Specialist Reserve Public Affairs Officers and the Air Force Imagery Specialist mustering, and provides administrative support for many Air Force personnel posted to the ACT region.
Over the years, 28 Squadron has provided support to Australian Defence Force exercises and operational deployments overseas. At home, 28 Squadron fire fighters responded to emergencies including the devastating 2003 Canberra bushfires.
The parade will be led by the Commanding Officer for 28 Squadron, Wing Commander Karen Ashworth.
Wing Commander Ashworth said 28 Squadron’s history demonstrated its very close bond with Canberra.
#Canberra
==

I was curious what it was for, figured others might be too.

“If you are unsure whether you are administered by 28 Squadron, then please refer to the ‘Additional information’ section of your posting order.”

Now there’s a unit with Esprit!

bj_ACT - 14 minutes ago
Just to cover off the people who haven’t been helped by the stamp duty switch (and Chewy, we know this is our main area of... View
James Forge - 19 minutes ago
Modern houses would make better use of their piddly litttle blocks if the upper storey was allowed to be the same footprint a... View
James Forge - 21 minutes ago
Robbie Munday And Molonglo. Googong to a lesser extent. View
Public Sector 4

Capital Retro - 51 minutes ago
I should have stated the obvious namely most service station sites have ample space for both solar panels and batteries but I... View
chewy14 - 6 hours ago
Capital Retro, You've missed the point. The idea of collocating the charging points at the PV/Battery sites is for efficiency... View
Capital Retro - 7 hours ago
What about the 100% renewables/emissions free government buys up all the abandoned service stations in the territory and conv... View
Property 9

Elyse Albrecht - 1 hour ago
Caleb Albrecht lol apparently you can win an auction even after the hammer goes down 🤷🏼‍♀️ View
Jose Vega - 2 hours ago
In Spain loans for your own home is tax deductible.... Investment loans are not... Majority live in their own home. View
Joel Suryawanshi - 4 hours ago
Sarah Young we are also forgetting that the greedy real estate agents are bumping up the prices and attracting investors from... View
Food & Wine 16

pink little birdie - 3 hours ago
Most of the start up support tends to be geared to that in the technology space or things with end consumer appeal. Most inno... View
Kevin Hodder - 15 hours ago
Rent, rates, stamp duty, taxes, work cover compliance ect and every thing else the act gov stings you! just so you can open t... View
News 4

ACT resident - 5 hours ago
Is this more spin from the lessee? ALDI at Fyshwick did not proceed because there are very stringent rules in the ACT regardi... View
What's On 1

Investigations are continuing into how a vehicle competing in the Finke Desert Race near Alice Springs left the course and...
News 72

Smoking tyres and car chase dramas shut down Civic, but this time it’s all legal

@The_RiotACT @The_RiotACT
A kitten found shot with multiple air rifle pellets in southern Canberra has fully recovered and been adopted by a local family https://t.co/uCziluwGXL (1 hour ago)

@The_RiotACT @The_RiotACT
Frugii Dessert Laboratory will close on 30 June, almost four months after the death of 'Mr Frugii'. Canberrans have been quick to share their fond memories of the iconic Braddon store https://t.co/EkZvUAF7dv (3 hours ago)

@The_RiotACT @The_RiotACT
The community has backed the government's Integrated Plan for the Red Hill Nature Reserve and surrounds. Both the environment and Federal Golf Club are winners https://t.co/O2Dee0YFDV (4 hours ago)