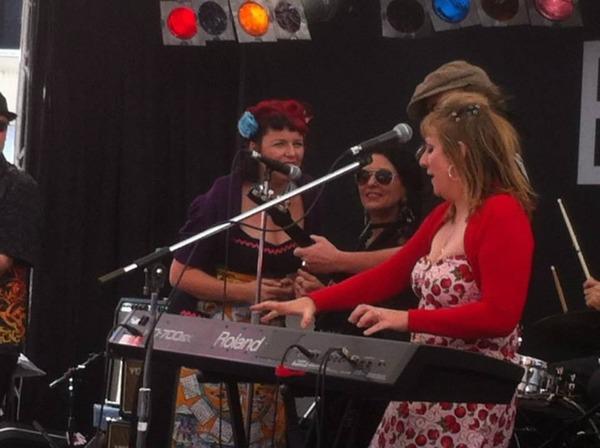 An amazing pianist with an honest vulnerability in her vocals, rawness and emotion are what strikes you when you hear what Ali Penney and The Money Makers play for you. Ali knows how to put on a show – a funny and entertaining show – and play songs which get the audience toe-tapping and dancing. Completing The Money Makers are guitarist Dave Blanken, strong and silent funk-man Mike ‘Duck’ Rix on either bass guitar or double bass and ‘shuffle king’ drummer Ross ‘Rosscoe’ Clark.

Ali Penney has released three albums – “Temptation” with The Money Makers in 2010 and “Wait A Minute” in late 2011 with Dave Blanken and the West Coast hipsters, the Vibrolators. Recorded at Poon’s Head Studios in Fremantle, “Wait A Minute” reached fourth place on the Australian Blues Music Charts and stayed in the charts for over 12 months. She has just released her new EP “And On It Goes”, recorded with legendary producer Phil Punch at Free Energy Device Studios.

Lachy has seen much of the world, recording and touring with acts as diverse as Powderfinger, Glenn Hughes, Steve Vai, Jimmy Barnes, The Beautiful Girls – more recently recording on a new album of Joe Bonamassa’s coming out in 2015. The Lachy Doley Group’s second album “Singer Organ Soul” and debut DVD “Live at 303” are some tasty slices of what the band sounds like live – pumping with energy and good times.

Lachy’s international profile has been steadily growing since he was headhunted by Deep Purple to record a new version of “Highway Star” and his recording with Joe Bonamassa. The Lachy Doley Group has played over 100 shows and festivals around Australia since the first release in 2011 including Queenscliff Music Festival, Mojo Burning Festival, Rock In The Vines Festival, PEAK Perisher Festival and have been the stand out hit at the Gold Coast’s Blues On Broadbeach Festival for the last three years.

Looking forward to this double header tomorrow night! Both these keyboard players are absolutely brilliant, with totally different styles, so will be a real treat to see them both on the same night. Matt Ross, that fabulous singer/guitarist from Sydney is taking Dave Blanken’s place in Ali’s band. And I just read that Lachy Doley’s new CD, Conviction has already peaked at #1 on iTunes Blues Charts Australia!

Ken McInnes - 2 hours ago
Great people great coffee always a smile just a happy place. Well done it’s always nice to see a family working together da... View
Neridah McMinn - 4 hours ago
My absolute favourite place for a Saturday morning breaky 💕 View
Graeme Jeffries - 4 hours ago
I always stop there for a great coffee and toasted cheese and tomato sandwich. A friendly place and service with a smile! May... View
Opinion 2

Ol L - 3 hours ago
People are saying in other posts that dual occs fix this. No they don’t. A house near us was rented for $500 per week. When... View
Peter Curtis - 17 hours ago
Nick Savino it’s literally a ballot it’s depressing View
News 83

Jo Hann - 4 hours ago
Nada Krstin and, addressing your query as to whether they're qualified, there's no cognitive test either. We do not deem an e... View
Jo Hann - 4 hours ago
Nada Krstin there are 16 and 17 year olds who earn over $18k. The potential to pay tax is all that should be required, though... View
Nada Krstin - 12 hours ago
Jo Hann see my recent post to reply to your "if you pay tax, you should have an option to vote for the government that spends... View
News 26

assiduous - 4 hours ago
The predictable consequences of ACT government policy of not supplying the market with land on which to build housing in an e... View
Patrick Rezek - 6 hours ago
Maybe they can sleep on that little Lake extension that’s being built now at Acton. There is $$$ for that. Remember folks.... View
Savita Ubhe - 9 hours ago
Joel Suryawanshi wow domestic violence seem to be a huge issue there. Sad! View
What's On 17

@The_RiotACT @The_RiotACT
Spend some time with Emily Brindley from Sweet Bones Bakery Cafe in #Braddon & find out her tip for feeding unexpected guests https://t.co/vhYFYG9OJA (26 minutes ago)

@The_RiotACT @The_RiotACT
The Burns Club's plans for a new car park has run into trouble with @LittleAthsACT. Find out what's at stake https://t.co/FAlqC45VWK (3 hours ago)