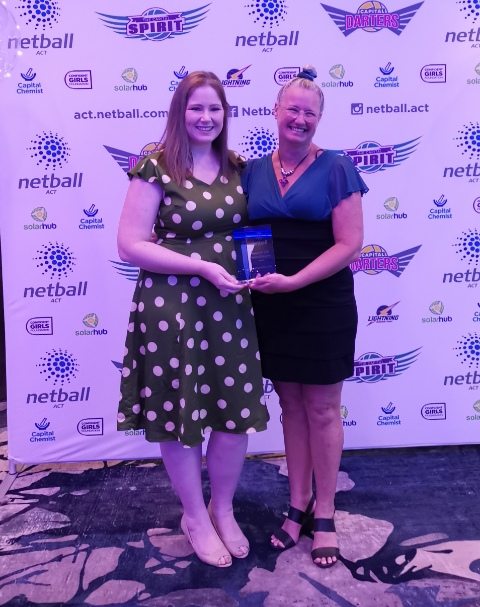 On the International Day of People with Disability, 3 December, the Gungahlin Jets are hosting a come and try day with their All Abilities Netball team, the Shooting Stars.

Marilyn Whyte, creator of the team, wants to continue to bring joy and positivity in an awful 2020.

She said the Shooting Stars had gone from strength-to-strength and weren’t finished with their 2020 season just yet.

“They [other teams] come off saying those girls have improved so much, I remember the first time we played against them. They are the comments I am constantly getting when we are playing, which is fantastic because everyone is acknowledging the achievements of the girls.”

READ ALSO All abilities netball team shoots for the stars

Not only are other teams acknowledging the improvements so is Netball ACT (NACT) and the wider Canberra sporting competition. The Gungahlin Jets won the NACT Inclusive Community Awards at their presentation night on Friday, 20 November.

“Everyone supports the team and think they are wonderful girls, and they are really encouraging,” Marilyn said.

“I hope it brings awareness of having teams with different abilities and more awareness for people with a disability that they can come and play.”

READ ALSO Netball team shoes it’s not all about winning

The goals and dreams are big for All Abilities Netball, but Marilyn isn’t setting the expectations too high.

“I would love to have enough teams to have a whole division even just in one competition,” she said.

“If they [the associations] all had one that would be fantastic but baby steps. We only have one team in the whole ACT, let’s try and make two or three and expand it from there.

“It upsets me that there are still people who can’t come and play even though we want everyone to. Ultimately I would like to see men or boys coming to play as well.”

Did you know that ‘All-ability’ sports are about fun and participation for EVERYONE!? Come join us and the Gungahlin…

Come and Try will be the last event for the Shooting Stars 2020 season. The girls are very keen to get into the next season and aim for selection in the ACT’s 2021 Marie Little Shield team.

“They are really disappointed that next week is our last game for the year, but they are very excited to help out next week at I-Day,” Marilyn said.

“They are already coming back next year and they don’t want to stop. They want to tell their friends and get more people involved.”

International Day of People with a Disability come and try day is being held on 3 December at Lyneham Netball Courts between 6:00 pm and 8:00 pm. RSVP by Tuesday, 1 December. The details are available on Facebook.

Thanks RiotACT – you guys are one of our biggest supporters! Our event page with up-to-date details can be found here: https://fb.me/e/3yKxH3FvD