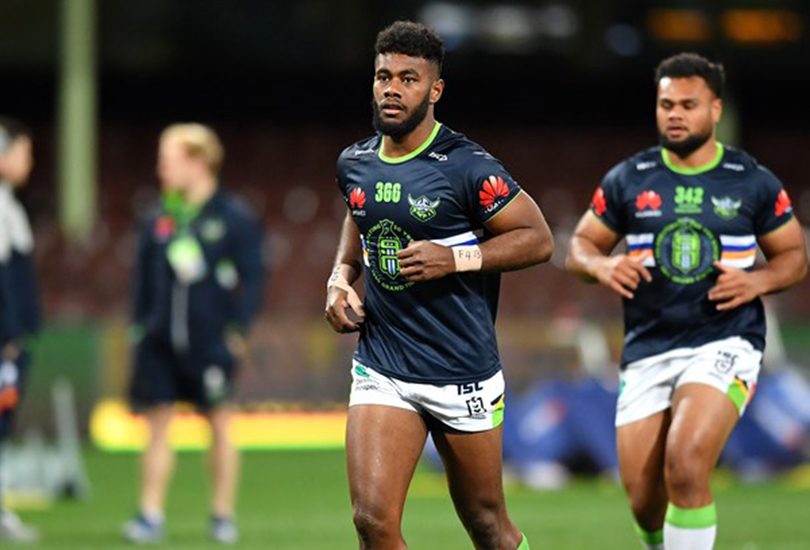 The Canberra Raiders have been dealt a cruel blow ahead of their toughest match of the season.

After being tested by an injury crisis in his team’s forward pack in recent weeks, coach Ricky Stuart now faces a shortage of outside backs with rookie winger Semi Valemei ruled out of Saturday’s round-13 clash against NRL ladder leaders the Penrith Panthers with a knee injury.

“Valemei has suffered a medial ligament injury and will miss three to four weeks,” the club confirmed on Monday, 3 August.

Tim Gavel's back with the latest scores and updates from around the sports grounds and what fans can look forward to in the coming week. He's with Dan Amodio from CBR Brave Ice Hockey and Canberra Cavalry, who says that while the Australian ice hockey season has been cancelled, there are high hopes that the Cavs will be back on the field later in the year. This week's wrap is proudly brought to you by Rubik3.

The Green Machine are currently on a three-match winning streak following a hard-fought 14-12 win over North Queensland Cowboys in Townsville on the weekend, and sit in fifth place on the ladder despite the mammoth injury toll.

“Charnze Nicoll-Klokstad will be assessed this week to see if he can return from a finger injury, while Michael Oldfield will also be assessed following a recent hamstring injury that has kept him out for the past two matches,” said the Raiders.

Valemei only made his NRL debut three weeks ago in Canberra’s grand final rematch win over the Sydney Roosters, but he has made an immediate impact. The flying Fijian scored a try against the Rabbitohs in round 11 and has so far amassed 183 run metres as he has worked his way into the starting side.

In other Raiders news from round 12, the NRL Match Review Committee has cleared Josh Papalii after an incident during the club’s win over the Cowboys. The prop’s forearm made contact with fullback Hamiso Tabuai-Fidow’s head early in the second half but was deemed innocuous.

Canberra Stadium could host game one of this year’s State of Origin series. Photo: Canberra Raiders.

Canberra is reportedly being considered to host the opening game of this year’s State of Origin series.

Game one is scheduled to be played at Adelaide Oval on 4 November, but South Australia’s COVID-19 restrictions could create a logistical nightmare with the NRL grand final being played at Sydney’s ANZ Stadium just 10 days earlier, on 25 October.

The growing number of COVID-19 cases in NSW means there is a strong possibility players could still be required to isolate for 14 days after entering South Australia. Currently, anyone entering the state from NSW faces mandatory quarantine.

Given that several Blues and Maroons players could likely feature in the grand final, the NRL is weighing up alternative options.

Melbourne and Perth have served as neutral venues for State of Origin in recent years in a bid to expand the market of the series. Both cities are off the table with Victoria currently in lockdown and the Western Australia border still closed.

A decision on the venue for game one has to be made in four weeks, which could play into Canberra’s favour. The ACT Government is expected to review the current Canberra Stadium crowd cap of 1500 this week, and the potential for a sizeable crowd is an advantage.

Canberra has never hosted a State of Origin game in 40 years of the series.

Richard Vlazlovski - 26 minutes ago
Heading toward the social credit system just like in china . View
Chris Jones - 1 hour ago
Knowing our government they’d assess your home as part of your income to fine us more View
Josh Anderson - 1 hour ago
Sweet, I'll quit my job, go on the dole and speed everywhere without a care. How dumb can these people be to think that incom... View
Community 28

Rob Calvert - 3 hours ago
Nothing regular dosing with Ritalin wouldn't fix. I'd recommend he look at a bit of the history of tennis......but I doubt he... View
Evonne Deans - 3 hours ago
Only can win a match with another player hey View
Grace Capz - 4 hours ago
Monica Tiffen no Gran he is gross! View
News 1

@the_riotact @The_RiotACT
The education union is concerned about a lack of clarity in the ACT's back-to-school plans, including contingencies to cope with teacher shortages and a lack of RATs from day one of term https://t.co/XYHMQJKNnw (52 minutes ago)