ANU brings Life in the Suburbs 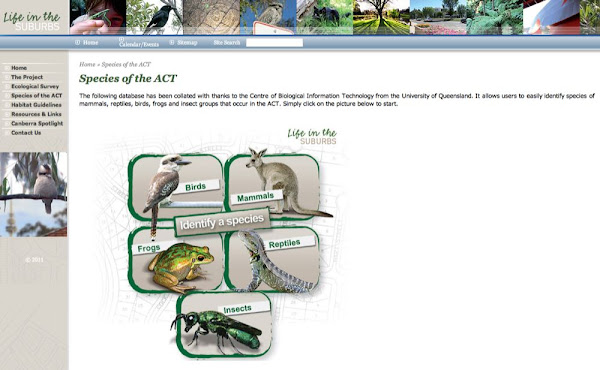 ANU has announced the launch of a new website called “Life in the Suburbs” to help identify the creatures that can be found in Canberra.

Life in the Suburbs also includes a database which helps people identify locally occurring species and learn more about their ecology. Listings cover birds, frogs, reptiles and mammals, including a local species of platypus – one of which was recently spotted taking a dip in Sullivan’s Creek.

Mr Taylor said the sighting highlighted that, like the rest of Canberra, Sullivans Creek and ANU are home to a large variety of native species.

“Most ANU staff and students probably think of Sullivans Creek as little more than a glorified drain, but a stretch of it actually has some important ecological significance,” he said.

“But it is home to turtles, water rats – which are one of only two amphibious mammals indigenous to Australia and reasonably rare – and now, according to recent sightings, a resident platypus.”

The Life in the Suburbs project is an initiative of ANU in partnership with the ACT Government, Australian National Botanic Gardens, CSIRO, the National Museum of Australia, the National Capital Authority and the Sullivans Creek Catchment Group. It is also supported by the Australian Government’s Natural Heritage Trust.

That is a nice site. One suggestion though; don’t use the term ‘menu bar’ when you are talking about native animals in the suburbs. Though duck-billed platypus with truffle, stuffed with its own eggs is very nice, I hear.

I hate to dredge up an old post, but this morning I was sure I saw a platypus in Sullivan’s Creek! I would have thought it was a rat taking a swim, but I was sure I saw the distinct duck bill attached to the body. What do you think the chances are that it was actually a platypus?

Interesting, plenty of water rats in there.

Maybe go and have a look again?

I hate to dredge up an old post, but this morning I was sure I saw a platypus in Sullivan’s Creek! I would have thought it was a rat taking a swim, but I was sure I saw the distinct duck bill attached to the body. What do you think the chances are that it was actually a platypus?

Jordan Amber - 2 hours ago
Anthony Gordo the club has to diversify away from gambling based revenue business models and as part of the ACT Government re... View
Peter Morales - 5 hours ago
David Malcolm WTF should they View
Peter Morales - 5 hours ago
The kid's ain't got a chance to voice themselves against a drug and gambling organisation especially when their backed by loc... View
Community 3

Chiara Jane - 4 hours ago
Courtney keep an eye out for your neighbour! View
Katarina Vucic - 10 hours ago
Interesting 🤔 View
Janet Ilchef - 11 hours ago
Hannah left out the story of Dick on pogo sticks across the Harbour Bridge View
Lifestyle 8