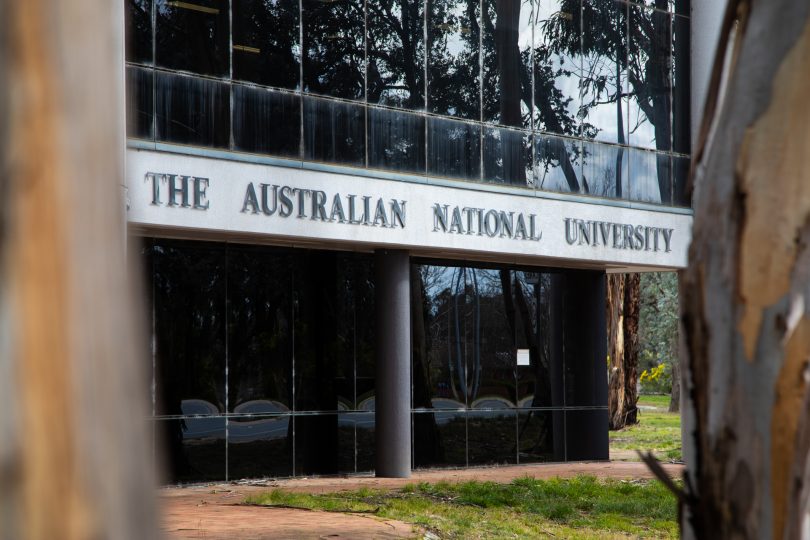 The cluster of confirmed cases of COVID-19 at the ANU now sits at 600. Photo: Michelle Kroll.

At least 600 cases of COVID-19 have been reported in student residences at the Australian National University and the growing post-O-Week cluster shows no signs of slowing down.

A spokesperson for ACT Health confirmed this caseload was current at COB yesterday (24 February) but could not provide updated figures this morning.

The university is supporting most residents who have contracted the virus to isolate in their rooms, although some students have been moved to a dedicated quarantine facility on campus.

Across the ACT, 773 new cases of COVID-19 have been reported today. Health authorities continue to say the ANU cluster is contributing significantly to the ACT’s high daily caseloads.

Like yesterday, there are 41 people in hospital, including three in intensive care, although none require ventilation.

The vaccination rate for the ACT’s 12-plus population remains 98.6 per cent, and 66.6 per cent of residents aged 16 and older have received a booster.

According to ACT Health’s latest epidemiological report – released this morning – case numbers in the week of 14 February to 20 February jumped 11 per cent. The rolling mean for the week also increased to 490 cases per day, up from 445 the previous week.

Authorities attributed this spike in cases to increased movement in the community, likely driven by the return to school and the return of extracurricular activities.

As Chief Health Officer Dr Kerryn Coleman said earlier in the week, this increase in cases hadn’t led to an increase in hospitalisations. She called this a “promising sign”.

Of the 10 new hospital admissions in the week, seven were fully vaccinated, one had received a booster dose and three were unvaccinated.

The effect of the ANU outbreak isn’t covered in this reporting period, however.

READ ALSO To mask or not to mask? The rules explained

There are now 1144 people in hospital with the virus and 64 people in ICUs around the state.

Victoria has reported 11 deaths overnight and an additional 6580 cases of COVID-19.

There are now 301 people hospitalised with the virus in the state.

Significant changes to mask rules have already come into effect in NSW with major changes to follow in the ACT at 6 pm tonight and in Victoria at 11:59 pm.

While most settings will be the same across the three states, there is a discrepancy between the states on masking in schools.

NSW has slashed mask-wearing even further. From Monday (28 February), no high school students and staff will have to wear masks, and from Monday week (7 March), staff at primary schools and childcare centres will be able to remove their masks.