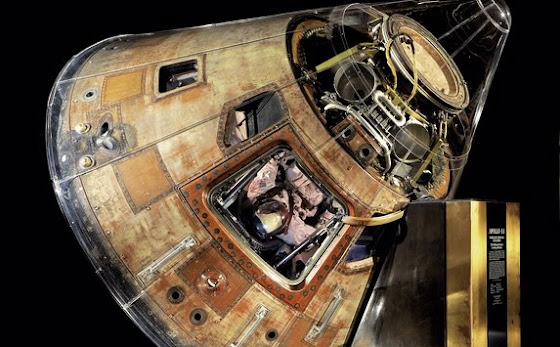 Anyone who’s done the tourist trail in Washington DC knows the National Air and Space Museum (part of The Smithsonian) is one of the coolest places on earth.

So it’s very exciting to see ANU announce they’ve signed up with that august body:

The signing of an agreement overnight in Washington DC between the Smithsonian’s National Air and Space Museum and The Australian National University represents a giant leap forward for efforts to build a national astronomy and space science museum at Mount Stromlo.

ANU Vice-Chancellor Professor Ian Chubb AC and National Air and Space Museum Director General John ‘Jack’ Dailey signed the agreement. It sets out the first steps for cooperation that will support the development of a museum to tell the story of Australia’s contribution to space science and space technologies, and celebrate the special role Australian astronomers have played in the exploration of the cosmos.

The signing comes as the University prepares to celebrate the 100th anniversary of the iconic Mount Stromlo Observatory and will see a number of key curatorial staff from Washington come to Canberra in coming months to take part in a planning conference for the proposed museum.

“The National Air and Space Museum in Washington DC is one of the great science museums of the world. We want to build a museum that will inspire our young people, melding science, art, culture and history – and growing our already close relationship with the Smithsonian Institution will ensure that we create something wonderful for Australia,” Professor Chubb said.

Professor Chubb said the museum would draw on the long history of cooperation between the United States and Australia in astronomy and space science, and the Smithsonian Institution has always been part of that cooperation.

All very well to get the ideas but the artefacts might be a bit tougher.

best thing to have happened to the ACT for ages

Awesome I have been to the Air and Space Museum three times in the past two years including the annex at Dulles Airport and can only hope that a fraction of what is displayed makes it way out here. If you are in DC take the trip to the annex at Dulles it is well worth it. Makes the exhibits at the National Mall look miniscule. Sort of like the AWM annex compared to the AWM.

…we simply don’t have enough big and shiny things to drag in the crowds.

Now if we could get a space shuttle from NASA it may make it worth visiting…..

They could whack one of the V2 Rockets we have out at Mitchell in there. After all, the US space program was built with the work of many German scientists.

I was blown away to see Enola Gay.

we simply don’t have enough big and shiny things to drag in the crowds.

But the Smithsonian does and I guess that is the point. Like the AWM, they have so much stuff, there isnt enough room to display it all.
And I have to agree with the other posters that a visit to the Air and Space Museum is the only reason to go to DC. I was blown away to see Enola Gay.

On space matters, the ISS will be visible (clouds notwithstanding) tonight from 8.55 to 9.00pm. Rising from the north-west horizon.
Should be good viewing, apart from the full moon washing things out somewhat.
Last time I watched the ISS go over was from Coffs Harbour when the shuttle was also attached, and it was substantially brighter than Jupiter, and moving quickly.

What are they going to display, a few old telescopes and a cardboard model of a rocket?

It’s going to open to a huge fanfair and then draw a miniscule crowd for the remainder of it’s existence, we simply don’t have enough big and shiny things to drag in the crowds.

Now if we could get a space shuttle from NASA it may make it worth visiting…..

very cool, although hopefully wherever they set it up at Stromlo has some bush fire protection built in.

On the other hand, Mt. Stromlo was covered in fir trees back then. It’s not (and will never be) the case now.

This institution has the potential to be one of Canberra’s great institutions, along with the War Memorial, the National Museum and Gallery, and the National Library. While the focus of this isn’t to be the National Science Museum, it could do one aspect of science very very well. Not just space sciences, but our aeronautical endeavours as well.

Re: # 3 – I think pretty much any Western space museum does that, including our own deep space tracking station. I know the yankies where the first on the moon, but the East did accomplish a great deal before that, and in most cases these achievements are not highlighted as well as they should be.

There can’t be too many people around who don’t realise that Sputnik was slung up there by the Russians. But I guess a sign would help those Ozzies who don’t know..

very cool, although hopefully wherever they set it up at Stromlo has some bush fire protection built in.

@troll sniffer
I can say, I have been to the smithsonian about a year ago in D.C and this was my second time I have visited and I can confirm your gripe that I have seen has been fixed as they have undergone a couple of renovations over the years since I last visited in ’99

On the other side – I am pleased to hear this is going to be stationed in Canberra. 😀

I spent two full days at the Smithsonian Air and Space museum in Washington in 1994 and still didn’t get to see it all!

But I have one gripe. It may have been fixed in the meantime but I’ve not heard any news stories to suggest it has.

They have a life-sized model of Sputnik hanging in the main gallery and a plaque nearby which simply states that this is Sputnik 1 the first man made object to orbit the earth. No mention that it was a Russian spacecraft nor any other references to the consternation it caused in the aviation and space communities. Nothing about the technology behing its launch etc.

Only a small gripe but in my opinion one indicative of an organisation that in some ways is out of touch. I would hope that a more balanced view of the exploration of space be offered in any local displays.

Indeed. I’ve never been to DC, but know the Smithsonian is one place worth seeing.

It’s not quite to Armstrong’s exact wording, but I did chuckle at the “giant leap forward” line in the presser.

This is quite… awesome!

Gareth Peck - 30 minutes ago
Nathan Lofthouse what? so you're saying everything on social media isn't well researched, unbiased fact??? WTF??? View
Gabriel Spacca - 8 hours ago
Pretty sure he is not the target demographic for TikTok. View
Larry Appley - 8 hours ago
A publicity stunt from a former radio announcer? Who would have thunk? View
Property 26