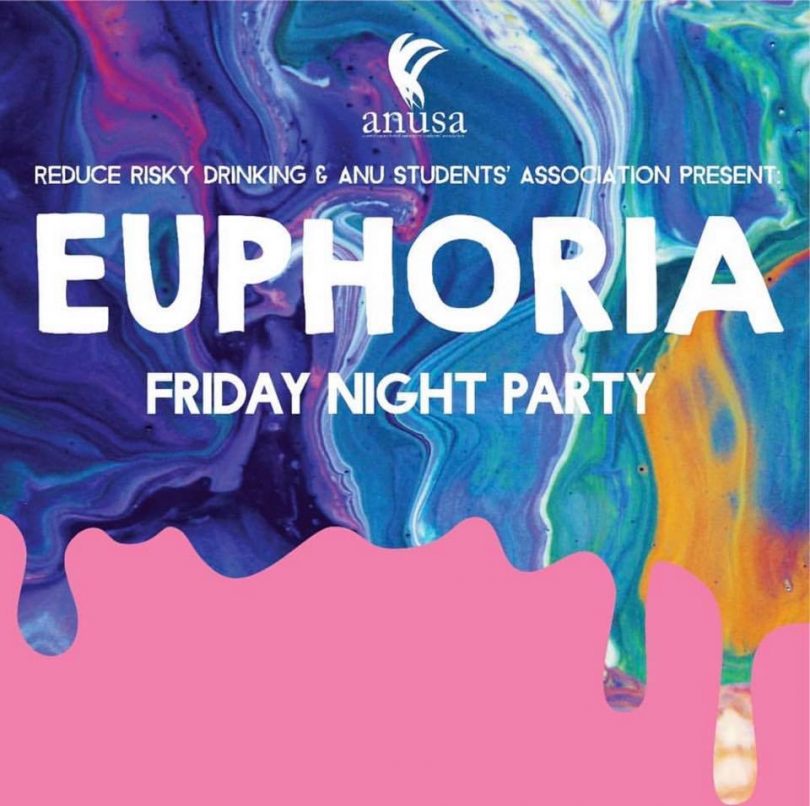 Euphoria began with a sense of promise. The afternoon was warm, the grass was green, and the prospect of Kira Puru, Sampa the Great and Middle Kids loomed. Sure, the wait to get in was a little long, but so what? Anything good is worth waiting for.

My optimism was shaken slightly when Kira Puru’s set was significantly delayed, and then shortened to a half-set. Still, she rocked the little time she was given, the weather was good and I had tasty, if slightly cold, nachos. Then I went to pee.

Anyone who has been to a festival knows that toilet lines are always bad. You will never, ever go to a festival and not have to stand in line jiggling slightly to try to keep the pee in. Even for festival standards though, the toilet line was daunting. And it only got worse – within a couple of hours, guys were peeing against fences and trees, and eventually, the security guards started telling students to pee at Chifley Library, more or less abandoning the lockout policy.

I made it back in time to see Sampa tear the stage up, in what was the best performance of the night. I say this not because the other acts weren’t great, but because they were hampered by issues ranging from shortened set times to atrocious sound. Middle Kids’ vocals were barely there for the first few songs, which was disappointing given it was their first time performing in Canberra. The sound was slightly better for Hockey Dad, but they were only able to play a short set because they were so delayed.

The team behind Euphoria absolutely tried their best. The lineup was excellent: they brought Middle Kids to Canberra for the first time, snagged Hockey Dad as a headliner, and had excellent talent in the form of Birdz, Kira Puru, Sampa the Great, Touch Sensitive and Canberra locals Small Talk. There was free water, and the can recycling initiative was a great idea.

But it was let down by a ton of logistical issues: not enough toilets, not enough food vendors, not enough bar staff (and not enough stock), problems with the sound system, and just a weird vibe. A lot of the decisions didn’t seem to make sense: why couldn’t you just hand over your can for a drink discount at the bar instead of needing to go in a separate line? Why were the light beers the same price as the full strength beers? Why?

Di Hunter - 10 minutes ago
Martin Budden fact though is that horses keep the fire fuel down, start obliterating them and start increasing massive fires,... View
Opinion 18

Jeffrey Brown - 42 minutes ago
Ahhhh those were the days. Standing in the queue and watching the odd brawl of dudes trying to prove their worth. Was normal... View
Kim Rumble-Kozjak - 9 hours ago
Yes!!!!! Our kids have no idea! View
Property 13

Valerie Foster - 4 hours ago
This is a problem when a city expands the crime rate goes up. View
Erika Olivier - 5 hours ago
Reality is crime is everywhere, the fact they picked her is bad luck... View
Owen Lund - 8 hours ago
Dale Simpson mate dreambeyan is the land of the free View
Community 1

Who is Jessica Pearce? Exploring the grief and mystery of ‘missingness’

@The_RiotACT @The_RiotACT
ACT Policing has located the body of a 21-year-old man adjacent to Paddy’s River Road. ACT Policing says the incident is the first road fatality of 2021 https://t.co/h37d0FswAa (17 minutes ago)

@The_RiotACT @The_RiotACT
A housing shortage in Yass means people seeking accommodation are finding themselves locked out of the town’s rental market https://t.co/CDuQ5Hbc4S (42 minutes ago)

@The_RiotACT @The_RiotACT
Hannah Quinlivan is the creator behind the distinctive art along the light rail line. And there's a story behind each unique panel https://t.co/6fYF0Xtc3M (2 hours ago)