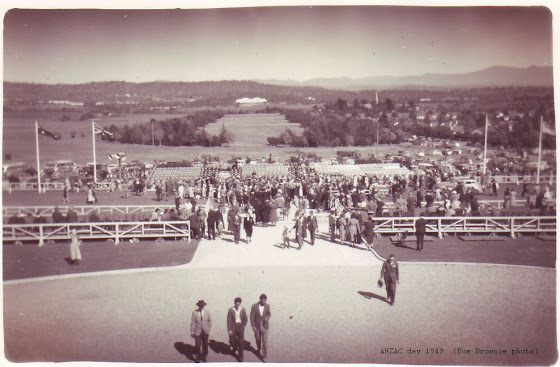 The recent brief look at Anzac Parade prompted “Old Canberran” to dig around in his collection for a revival of his photo tour of the Canberra that was.

(Slideshow of all OC’s old photos below)

Thanks for the nice comments people. It’s great to be able to share these old pics with you. I’ll have to look further as I am sure I have some photos of King’s Avenue Bridge under construction. An old 1933 map of Canberra shows the area in front of the War Memorial as ANZAC Park which accounts for the planting of many trees down each side, so even back then that area ws identified as some kind of special memorial.

Work on the lake started around 1961 with the construction of the dam and the shaping of the lake bed and walls. They moved a lot of dirt around over the next couple of years. It started to fill in December 1963 when my wife was in the old Royal Canberra Hospital having our second child. It filled completely in 1964 after a lot of unexpected rain and from that day on the character of Canberra was changed. It started to look like the National Capital that Burley Griffin envisaged.

Love these. Thanks again for sharing.

I can’t see them giving a “Canberra Gold” Chief Minister’s award to someone who hasn’t lived here in 20 years and actually hates the place. Great pics though.

I don’t know how you formed that opinion Skidd but I certainly don’t appreciate it.
Canberra is a beautiful city and very dear to my heart. I was born and bred there, married and raised 3 kids there and I intend to be buried there. What I am against is self government and what it has done to the City. I have no idea how long you have lived in Canberra but maybe you have not been there long enough to know what it used to be like.

I can’t see them giving a “Canberra Gold” Chief Minister’s award to someone who hasn’t lived here in 20 years and actually hates the place. Great pics though.

Do we really want Michael Buick’s massive, brutalist war memorial (don’t we have one of those at the top of the parade?) wrecking the view? (See Stateline a week ago)
It’s so bad, you can’t even find the plans for it on the NCA website (NCA sponsored a competition for this monstrosity apparently).

if you’ve got any more, please show them too.

Wow. I knew Torrens Street Braddon had changed a lot over the recent past but didn’t appreciate just how much. A bit of a pity really. So many of the trees are gone.

Lake Burley Griffin was completed in 1964, I believe.

Oh come on. why does this myth continue? Everyone knows LBG was formed in the last ice age when glaciers from the alps ground down the mountains and formed a neat hole in the ground where a river used to run.

Lake Burley Griffin was completed in 1964, I believe.

Those are awesome! Thanks for sharing.

These photos are great. Anyone have or know of photos from when LBG was first constructed?

if you’ve got any more, please show them too.

Yet another nice old photo of Canberra. Love them!

The old photo is awesome. Great to see what it looked like pre-lake.

Magnificent photo of the AWM.

Love the old pics, thanks to Old Canberran for sharing them!

Robert Lang - 2 minutes ago
Kirsty Noad I work in the trauma operating theatre of Canberra Hospital. I have not seen any scooter injuries. I see major tr... View
Robert Lang - 4 minutes ago
I too gave a hearing disability. I stand to the left of all shared paths. No problem. View
Robert Lang - 5 minutes ago
Cheryl Thuillier yep, and let’s make car drivers wear helmets too. After all, car crashes are the number one cause of head... View
Opinion 54

Luke Costanzo - 22 minutes ago
Michael Pearson zero facts or fact checking. All conjecture and clickbate. Try again View
Julie Macklin - 41 minutes ago
I had my first Astra Zeneca vaccination last Thursday. Initially all I had was a slightly sore arm, which soon faded. However... View
Luke Costanzo - 54 minutes ago
Jeannou Zoides check mine out with the nice NHS logo. I had it 3 weeks ago and I am still alive. Problem with the anti vax co... View
News 22

Andrea Mya Riboust - 8 hours ago
Ayrton I'm torn between laughing and issuing a melancholy sigh ruminating on the state of modern society that significant mon... View
Ayrton Coll - 8 hours ago
Most elaborate game of musical chairs devised. View
show more show less
*Results are based on activity within last 7 days

@The_RiotACT @The_RiotACT
Quarterly data is showing the ACT as the shining star of the national recovery https://t.co/oL5UFOqkvw (51 minutes ago)