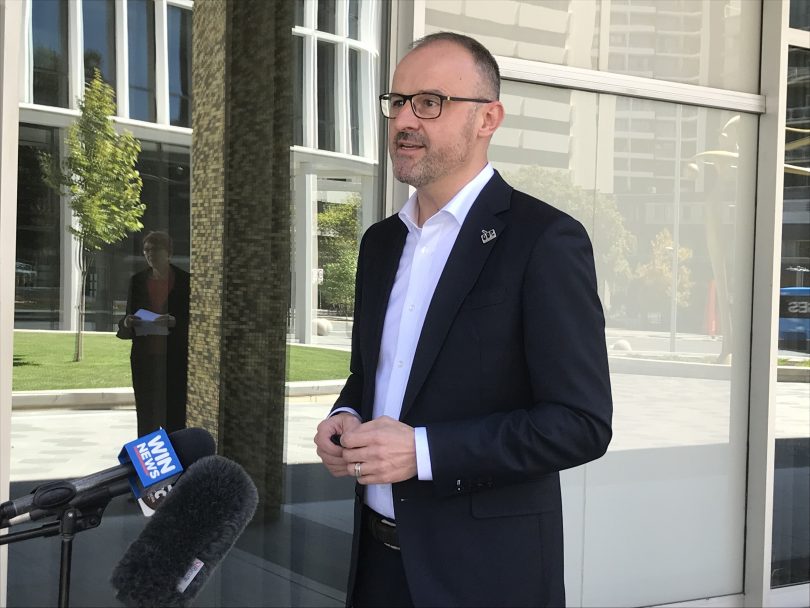 With the lifting of density restrictions by Chief Minister Andrew Barr, most Canberra public servants will be returning to the office. Photo: Lottie Twyford.

APS agencies are bringing staff back to their offices after the easing of COVID-19 restrictions in the ACT and NSW on Friday (18 February), particularly the scrapping of density limits.

Some agencies were quick off the mark with emails soon advising staff that the new arrangements would be announced this week.

The Australian Public Service Commission welcomed the easing of COVID restrictions, saying that, in principle, agency heads should seek to return employees to their usual place of work as soon as it is safe to do so.

It said decisions around working arrangements were up to individual agencies and would be tailored to their particular circumstances.

“The removal of these restrictions is welcome and will allow all Commonwealth public service agencies to respond by returning staff to their usual workplace,” he said.

But Mr Morton acknowledged that some staff would continue to work from home.

“We will see a greater use of flexible work arrangements into the future as agreed by employers, based on discussions between employers and employees on the productivity benefits of these arrangements,” he said.

Mr Morton also said the return to workplaces would be welcomed by the small and family businesses that operate near the vicinity of offices, something the Federal Government has consistently supported. 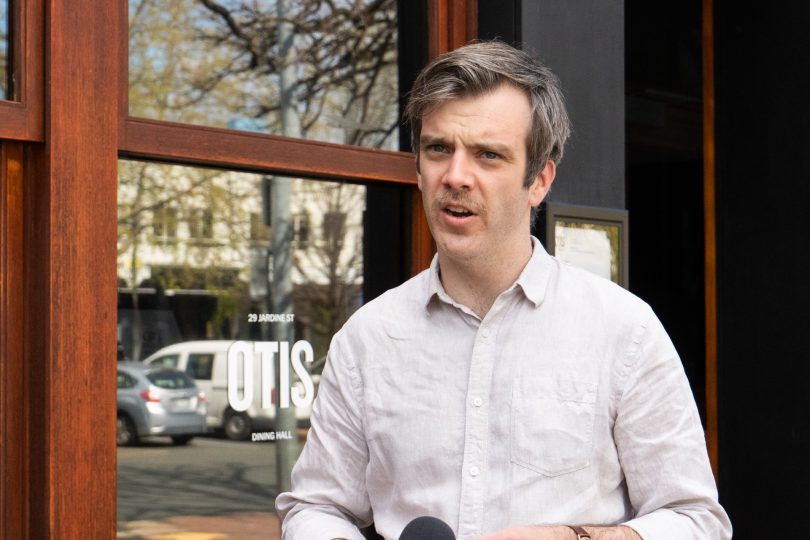 Business groups were thrilled at the prospect of former and potential customers back in close proximity, although they also acknowledge that the pandemic has changed the way people work and not all will return.

Australian Hotels Association ACT general manager Anthony Brierley said business wouldn’t return to what it was pre-COVID, but the new normal should be workable for the hospitality industry.

He said that the changes, including lifting the ban on dancing, would be particularly good for businesses on a Friday and Saturday, but scrapping density limits would bring people back into workplaces and boost mid-week trade.

“Getting public servants back into some of these areas where businesses have set up on the back of that trade actually helps them from Monday morning through to Friday lunchtime,” Mr Brierley said.

“It’s not just us, it’s dry cleaners, newsagents, retail stores – a lot of business decisions have been made off the basis of that’s where the consumers were.”

The next step would be the end of the mask mandate when the ACT Government next reviews restrictions this week.

“You obviously can’t eat or drink when you’ve got a mask on, but hospitality venues are places of social interaction, and that interaction becomes a lot more difficult when three-quarters of your face is hidden.”

Mr Brierley said masks were not required in gyms and a range of other places because wearing them was not practical, and that should be the case for hospitality too.

“As soon as they can go, the better for everyone,” he said.

The public servants union called for staged, sensible and safe return to offices.

“What we do not want to see is APS agencies jumping the gun,” CPSU National Secretary Melissa Donnelly said.

“It is important to re-visit all COVID safety plans given new variants and recent outbreak, and it’s vital that agencies look at emerging issues around ventilation, testing and maintaining supports for vulnerable people.”

Ms Donnelly said staff had genuine concerns about how health and safety measures would be managed in APS workplaces, including social distancing. She said the return to the office should be done in consultation with employees and their union.

“The Commonwealth has an obligation to set an example for all employers about best practice for returning to work. It is critical that this is done properly to avoid a future wave of infections,” she said.

And what about the local shops in the suburbs which will lose this income? Why privilege civic?

I found having to get my car inspected for registration in someone’s lounge room by a work from home ACT employee most unusual and a novel experience from driving over the pits at Dickson years ago. I suppose I should move with the times.

Have to get on with life at some stage. Definitely happy to be back in the office.

About time. The backlog in processing basic administration has shown this working from home, for many, has been a failure.
Just look at Access Canberra and the mess they are in, It is currently taking months to process some of the most basic requests.
Yes some have managed to be productive while working from home but there is also a large number that have only managed to improve their golfing handicap while on full wages.
Time to earn your keep public servants.

Might push customers to the city businesses but you’re taking it away from somewhere else.

What I found stupid is that at my wirk that I just left, they refused me to work from home and I’m immune compromised. The waste of money regarding the government is crazy.

Michael Murer I’m in the same boat. So far they haven’t kicked me out but it’s just a matter of time. And our work is 100% online so it’s stupid.

Why? They were happy and just as productive at home. Maybe more so.

Never about people or even small businesses, only about profit of Big CBD office property owners who fear declining asset value due to a work at home future

Nobody should be forced back to the office

If the rest of us are back then they should too. Sick of the APS being treated like a protected species.

Renea Hazel woa woa lol…. our jobs are still able to be done working from home. We have been working the whole time. Going into the office makes 0 difference, all it does in the current environment is shove a bunch of ppl together in small spaces. I’ve gotten 0 help from gov, not entitled to any benefits, can’t claim anything at tax, but still gotta pay my mortgage and carry on just like everyone. Be nice to me atleast 😅

I went for a walk around the casino side of Civic last week and it was deserted. I don’t see how the cafes were staying open. The only people I saw were the convoy protesters camping in Glebe park.

Emma Lowe Pre COVID there were always people walking around or in the cafes. What’s your point?

Guy not that side of the city

Emma Lowe That side of the city was never completely deserted.
There wouldn’t be any cafes or office blocks there if there was no demand for them pre-COVID.

Why ‘APS’ with a picture of ACT Chief Minister?

Ian Wheeler That hadn’t even clicked for me before you poined it out. No mention of ACT PS at all.

Ian Wheeler people forget that they are employees and can be directed back to work.

@Rooster James Did you miss my point?
The article is about the *Federal* Public Service. The photo is *ACT * Chief Minister who has nothing to do with the APS.

Ian Wheeler because if you take the time to read it rather than scroll you would understand! Let me summarise for you…….If the ACT minister didn’t announce the restrictions easing the APS would be making different decisions 🤦🏼‍♀️

its a picture of the ACT minister, because it’s our APS return to work happening following NSW.
It’s not a federal move yet, as not all states are commencing return to work.
It’s also commenting on the return on employees to the city centre, to support Canberra business.

As such, pic of Andrew Barr.

Read the article and it will make sense 🙌🏻

Jenna Roberts No, the article is about the APS (Australian Public Service) returning to work. Territory workers are the ACTPS. It is a federal move. ACT public servants will be gradually returning to the office but not yet.

I agree, I think people have got used to making their own lunch, also as the RBA pointed out interest rates are about to rise. Not sure people are going to be getting their lunch like they did before

Jared James I often get my lunch delivered to home. Or brunch even. Not every day and not both on the same day… But I do spend most of the money I save on petrol on food delivery. I like it.

This is the exact reason why we need more commercial business in Gungahlin and less residential apartments. Our shops and cafe’s don’t have the large employment bases of the other town centres.

The issue described here is what Gungahlin Business face everyday !

Darron Marks Gungahlin was badly let down by ACT planners. The ACT government controversially put its offices in Dickson instead of the usual ACT planning approach in new town centre of Gungahlin. Ask the chief minister rosemary Follett. She had no say. Ask who benefitted…

Darron Marks lucky they’re getting an APS hub out there soon!

Julie Patricia Smith I wonder sometimes if there were any qualified town planners actually involved in Gungahlin. The layout looks more like some town planning student’s first assignment.
Subsequent developments suggest the same student has been tasked with managing the area’s growth.

Just in time for the upcoming flu season – which is expected to be interesting combined with the second Omicron variant. Watch this space.

David Malcolm stating what science has said thats all.

Steve Ulr, does it though?

David Malcolm international flights will bring in the flu

Will be interesting to see whether people go back to spending like they did before.

Candace Driscoll all that money you’ve been saving!

Lesli Cameron Which we will now be spending part of on petrol and parking fees.

Candace Driscoll I know I certainly won’t be, I don’t have the income with inflation happening

Won’t make any money off me, I don’t drink coffe, take my own lunch and don’t shop. No point me going back to the office.

Angela M J Brown me too..