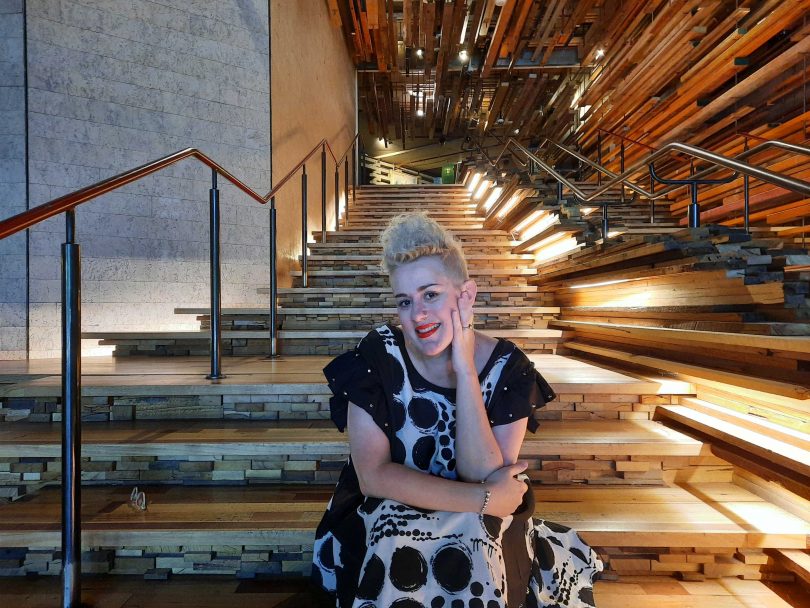 Katie Noonan: ”I want it to be super inclusive and welcoming whilst also honouring the original vision and bring it in to a new flavour.” Photo: Ian Bushnell.

In a major coup for the National Folk Festival, five-time ARIA award-winning artist Katie Noonan has been appointed its new Artistic Director.

One of Australia’s most high-profile musicians, Ms Noonan joins the festival after four years as Artistic Director at the Queensland Music Festival. Her appointment marks a significant shift for the Folk Festival as it moves to broaden its appeal and engage new audiences.

She has two decades of experience as a singer-songwriter, producer and record label owner, artistic director and advocate for the arts in Australia.

Ms Noonan said she was honoured to be the new caretaker of the Folk Festival vision of being “a focal point and meeting place for the exchange of songs, styles and ideas”, but acknowledges she faces a balancing act between respecting this and finding the fresh audiences needed to ensure the festival’s future.

”That is such a beautiful kind of mission statement because it’s very open, collaborative, and my work is highly collaborative. I love collaborating with people from all walks of life, so classical, folk, pop, jazz – the full gamut of music that inspires,” she said.

From an Irish background herself, she loves that country’s music but understands how much Australia has changed since the festival’s early days.

”The last 50 years Australia has become a very beautiful multicultural and colourful place, with a lot of colours that aren’t white, so I’m very keen to have the full gamut of expression in the festival,” she said.

”I want it to be super-inclusive and welcoming whilst also honouring the original vision and bring it in to a new flavour.”

The other matter to weigh is whether the festival can include overseas artists or to go to an all-Australian event.

That may be decided for her, depending on the state of the pandemic, but while it is a waiting game, she remains confident that the 2022 line-up will have an overseas contingent.

”People love Australia so much they are prepared to come and quarantine for two weeks,” she said. “And if we can’t have international artists, we can make an unbelievably awesome festival with all-Australian artists.”

Ms Noonan believes the flip side to COVID-19 for the arts is that the cultural cringe has dissipated, and as a passionately Australian performer she knows that Australians make world-class art.

She also recognises that the festival scene is highly competitive and the National Folk Festival needs to have a point of difference.

Part of that will be plugging into the national capital’s tourism drive.

”I’m excited about making a program that inspires people to come to Canberra, maybe for the first time,” she said. ”And to come to the National Folk Festival, there’s only one and it’s here.”

That will translate into giving the festival a higher national profile and leveraging more of the Easter season the festival has always occupied.

Ms Noonan does not expect to be performing herself, apart from the community choir, which will have a core role in the festival.

”I don’t think the artistic director’s job is to be one of the key artists. My job to be fanning the flames of other people’s work,” she said.

But as an artist, Ms Noonan believes she can bring a unique perspective to the role.

”I think it’s really good when a festival gets working artists to be artistic directors, because you do have an insight that only a working artist can have,” she said.

Managing Director Helen Roben said the festival was thrilled that Noonan would be leading its artistic vision into the future.

”We have no doubt that her breadth of experience and unwavering passion for the arts will shape the festival’s evolution, helping to grow the National Folk Festivals reputation as one of the best folk festivals in Australia,” she said.

Ms Roben said there was a need for the festival to expand its footprint and bring more young people into the folk community, and Noonan’s appointment was part of that.

“Our mission goes beyond simply presenting these folk activities to our audiences,” she said. ”We need to start finding ways to make folk appealing and also permanent in the lives of young people.

”We’re confident that Katie will find ways to nurture the traditions that are core to the National Folk Festival while bringing in her own artistic vision and strategy, that will help promote and share folk culture, to bring diverse, new audiences to the festival.

“We need to ensure the sustainability of the National Folk Festival into the future, and the continued growth of our community.”

Her collaborative production with contemporary circus group Circa, Love-Song-Circus, was a two-time Fringe Award Winner in Adelaide.

Ms Noonan has been a mentor and supporter for many young artists and women in the arts and was recognised in 2019 when she was awarded the Australian Women in Music Creative Leadership award and the prestigious APRA AMCOS State Arts Luminary Award.

Ms Noonan will present her first festival in 2022 after the global pandemic forced the cancellation of the 2020 and 2021 festivals.