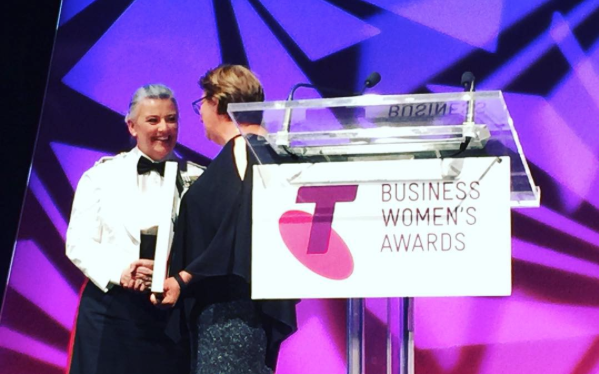 The army officer with responsibility for the healthcare of 71,000 Australian Defence Force members has been named the 2015 Telstra Australian Capital Territory Businesswoman of the Year.

Georgeina Whelan, Director-General, Garrison Health Operations, Joint Health Command for the Australian Department of Defence, learnt of the honour at a dinner to mark the awards at the National Arboretum on Friday night.

She has served overseas several times during her career, including a stint in Northern Sumatra, Indonesia, where she commanded the ANZAC Field Hospital following the devastating Boxing Day Tsunami in 2004. She earned the Order of Australia for this work and Governor-General Sir Peter Cosgrove applauded her humility and leadership skills, praising her ability to inspire people to achieve extraordinary things under arduous conditions.

Brigadier Whelan, who also won the Government and Academia Award on Friday, has a Conspicuous Service Cross for her instrumental involvement in developing an ADF rehabilitation and mental health program in 2003. She said her forte is the ability to manage, lead and inspire her team to achieve success.

“I am not afraid to ask questions, champion new initiatives and encourage innovation,” she said.

“The world needs women who inspire commitment, loyalty, excellence and diversity to deliver great outcomes irrespective of the field they are in. I am passionate about ensuring that the ADF delivers high-quality care to our ill, injured and wounded personnel and I am driven to continually improve the healthcare services accessed by our members.”

“Georgeina has completely reformed healthcare at the ADF. Her energy and commitment to putting our ill, injured and wounded soldiers first has not gone unnoticed. She has not only made them a priority but has evolved the way we take care of our officers and their families.”

The 2015 Telstra ACT Business Women’s Awards winners come from various industries including science, health, employment services and communications. Jessica May of Enabled Employment, an online portal offering flexible employment for people with a disability or ADF members with post-traumatic stress and other injuries, received the Start-Up Award.

Corporate and Private Businesswoman of the Year Sarah Valentine.

The Corporate and Private Award went to Sarah Valentine, Director of Corporate Affairs and Communications at Raytheon Australia.

The Young Business Women’s Award was earned by Joanna Richards for the innovative laundry detergent, Solution Solution and the Entrepreneur Award was picked up by Karen Porter, Owner of Solace Creations Double Glazing.

Philippa Moss, Executive Director of the AIDS Action Council proudly went home with the For Purpose and Social Enterprise Award.

The Australian Capital Territory winners will proceed to the national finals in Melbourne on Wednesday 18 November.