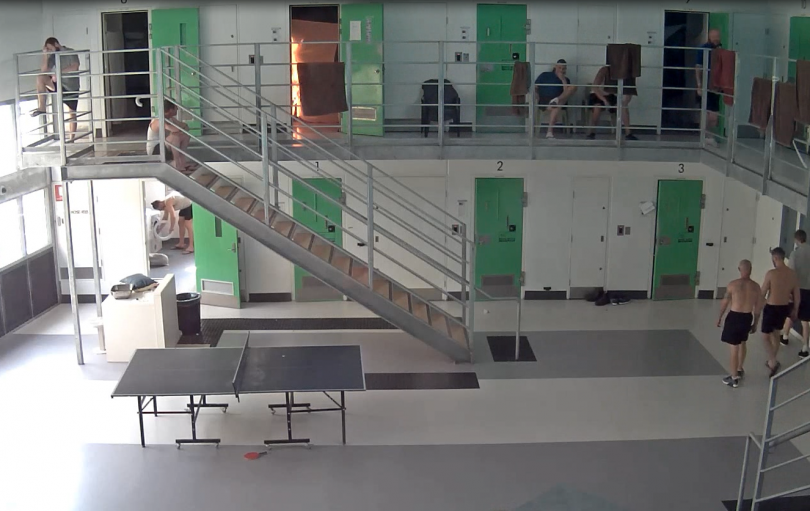 Jordan Beroukas (sitting down in the top right wearing a blue shirt) has pleaded guilty to starting a fire in Canberra’s jail during the 2019 bushfires. Image: Screenshot.

The terrible bushfires of late 2019 and early 2020 will be etched in the city’s memory forever.

But these devastating fires did not stop an arsonist, who now has a tattoo along his jawline saying “no comment”, from lighting a blaze at Canberra’s jail.

Footage tendered to the ACT Supreme Court shows 29 December 2019 was an ordinary day in a cell block at the Alexander Maconochie Centre.

Inmates stand around talking and others walk past the cells shirtless. But at about 5:00 pm, Jordan Beroukas went into Cell 7 and, with the help of another inmate, placed a sheet across the cell’s doorway before he lit the sheet on fire then took a seat on a chair outside the door.

The flames spread to other parts of the cell before other inmates rushed to put it out with buckets of water.

Beroukas, 24, pleaded guilty to a count of arson before telling the Supreme Court, on Friday (25 June), he had “grown up a lot” since starting the blaze.

“I didn’t realise how stupid I was at the time, and there was a lot of peer pressure involved, too,” he said.

“I was probably trying to impress people that I shouldn’t have been.

“I can’t really explain why I did it because I wasn’t thinking at the time.”

Prosecutor Marina Lucero asked him if he knew about the bushfires ravaging the country when he lit the fire.

He said while he knew there were bushfires, he didn’t know where they were or how serious they were.

“It was sh-t. It was just hard growing up,” Beroukas said. “I tried to behave at school but it was hard. I was a bit of a sh-thead of a kid.”

Beroukas, who was appearing in the court while being in custody for unrelated matters, said he had been in jail for six months “this time”, but had been in and out of prison since he became an adult.

This caused Associate Justice Verity McWilliam to exclaim, “you’re throwing your life away in jail”.

“I know, that’s why I’m trying to change,” he replied.

He said he had just become a father and now had a two-week-old baby.

Justice McWilliam told him while lighting a bedsheet on fire may have seemed like “a bit of fun”, he was lucky no one had died.

She told the court he now had two life-changing factors in his life: his engagement in rehabilitation and the birth of his child.

The birth of a child, she joked, “is a prison sentence in itself in some ways”.

“A sentence of imprisonment is an absolute last resort,” she said.

“This man, sitting in the AMC, it’s going to do absolutely nothing for him.

“It’s how I can make sure he comes good on us, to put it that way.”

Ms Avery had asked for a deferred sentence and Justice McWilliam said she would hand down her sentence on Monday (28 June).

She told Beroukas he would now be known as a convicted arsonist.

“It’s not a nice label to have for a stupid mistake,” she said.

Andrew Wadey - 13 minutes ago
Same thing in so many sports, like A-League who keep stringing supporters along and then find some justification to do whatev... View
Martin McMaster - 19 minutes ago
Who needs to start winning? View
Neil Chandler - 2 hours ago
Peter Bee true, but they produce some great players and there is a fanatical enough fan base that it would be a worthwhile ve... View
Opinion 7

Brisal - 13 minutes ago
"If you want to maintain that sense of community, less worrying about what other people might be doing is probably a good pla... View
Futureproof - 2 hours ago
Ditch Facebook and you will be much happier. Facebook is a morale vampire... View
Sam Oak - 2 hours ago
The majority of Canberrans either have moved from interstate or have links such as family in other states. It already became... View
News 123

Capital Retro - 14 minutes ago
I don't think Murrays Buses are "public transport", Leon and the only modes are buses and trams, the latter goes only in one... View
Craig Webb - 2 hours ago
Greg Donoghoe thats well and truely faster than an old plastic cab with a gardiner straight 8 in it! View
Greg Donoghoe - 2 hours ago
Yvoir Hingee maybe you need to give it a try now. Very enjoyable way to travel to Sydney. No traffic to put up with & very co... View
Property 2

Ian Jessup - 57 minutes ago
Maureen Ryan yeah it is. Both Q and WW punch well above their weight in sport View
Maureen Ryan - 4 hours ago
Ian Jessup that's a bit rough View
News 27

Capital Retro - 1 hour ago
......"do they look like they are getting married." Anything is possible now, in Canberra.... View
Cheryl Boyd - 1 hour ago
Kangaroos will go into water if they have been bitten by a snake. Hope it was taken to a vet to get checked over. View
Property 15

Mikey Moore - 1 hour ago
I would be more than happy to have something like this in my area. Unfortunately, the NIMBYs at WVCC oppose anything over 2 s... View
News 16

@The_RiotACT @The_RiotACT
A Kambah pizza bar has been identified as a close contact #exposure site in the latest list from @ACTHealth, while supermarkets across the ACT are named as #casual or monitor for symptoms sites https://t.co/LKRHn7xAFZ (56 minutes ago)

@The_RiotACT @The_RiotACT
Zed Seselja's Senate seat may be vulnerable, according to new polling from the @TheAusInstitute, but ousting him will be a big ask https://t.co/0HDjhrW54O (57 minutes ago)