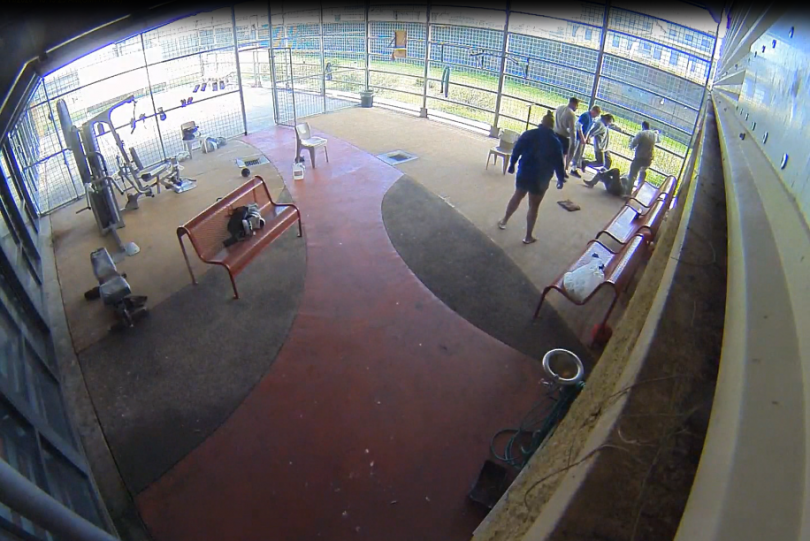 A prisoner at the Alexander Maconochie Centre can be seen being bashed in CCTV footage tendered to the ACT courts. Image: Screenshot.

A prisoner at Canberra’s jail was bashed so badly by other inmates he ended up with shoeprints on his face.

Afterwards, the man who police say orchestrated the attack laughed over the phone about how he had been paid $50 to be involved.

Court documents show the victim had been sitting on a bench in an Alexander Maconochie Centre exercise yard on the morning of 1 November 2020.

Two men, allegedly including bikie killer Frederick Elijah Mercy Tuifua, were exercising when they were joined in the space by others who included Kieran Horan and Jesse Lee James Scott.

Police alleged Horan, Scott and others, including Tuifua, bashed their victim for about 40 seconds before prison authorities intervened.

Later, police found the victim had cuts to his face and neck, two black eyes, bruising and “what appeared to be shoe prints on his face”.

Earlier this year, Tuifua admitted he stabbed Canberra Comanchero’s commander Pitasoni ‘Soni’ Ulavalu to death in July 2020 when he was 26 years old. He has pleaded not guilty to the prison bashing.

Both Horan and Scott have pleaded guilty and been sentenced over their roles in what Magistrate Beth Campbell described to the ACT Magistrates Court on Thursday (17 June) as a “totally unprovoked attack”.

CCTV footage tendered to the court shows the prison bashing on 1 November 2020.

The agreed court documents for 22-year-old Horan, who pleaded guilty to assault, show that he made phone calls after the bashing, during which he seemed to admit to organising the attack.

“I done something about [the victim],” he said in a call, and also laughed about getting paid $50 for his involvement.

In a call, Horan said he alleged to the others his victim was a “paedophile”.

It is unknown why the victim was in jail.

In court on Thursday (17 June), prosecutor Luke Crocker said Horan had kicked his victim while the man was “slashed” with a shiv by another person.

Horan’s lawyer, Lauren Skinner from the Aboriginal Legal Service, said the transcript from Scott’s sentencing in April showed Scott had kicked the victim in the head.

Mr Crocker argued while Horan’s role during the assault was relatively minor, he was equally culpable with the others as he had orchestrated it.

He said the victim was outnumbered in the premeditated and unprovoked attack.

Ms Skinner said her client denied encouraging the others, and while he spread information about the man, he did not intend to involve the others.

She also claimed he spoke to a corrections officer before the attack and said they should get the victim out of the exercise yard as something bad was going to happen.

She said Horan had begun using drugs at a very young age, and there was a clear link between his childhood trauma, drug use and offending.

Magistrate Campbell described the attack as a “nasty incident” and said the message needed to get around jail that “it’s not worth it” when it came to attacking someone else in prison.

Horan has been in custody for 18 months. His current sentence was set to expire in February 2022.

Magistrate Campbell sentenced him to an extra six months’ jail on top of his current sentence.

“You commit the crime, you have to pay the penalty,” she said.

Capital Retro - 46 minutes ago
Will it be named after Sam Stosur? View
Community 46

Zoe Lewer - 47 minutes ago
Bob Foster yep. Us humans sure have made an impact. We are the problem. You are right. The day the people who were invaded ch... View
Joy Gosden - 54 minutes ago
Yes. What were they thinking planting them in our suburbs. They drop limbs attract pests and stop grass growing around them.... View
Bob Foster - 1 hour ago
Another deluded hypocrite post Zoe Lewer 😂 I'm betting you live in a man made structure....made with either cut down trees... View
Opinion 64

Chris Montgomery - 48 minutes ago
Brian Ashcroft they only blow over cause their root system is higher than they should be. Most eucs that blow over are on fro... View
Chris Montgomery - 54 minutes ago
Gertraud Bell All the big Eucalyps were there before all the housing went in. So??? your saying to remove all native trees an... View
Mark Gledhill - 2 hours ago
how long will the eucalypt hate continue? this sounds like treescrimination to me! View
News 46

phydeaux - 54 minutes ago
Buy the way TheSilver, I nearly forgot to mention this with regard to your supposed other scenario https://pubmed.ncbi.nlm.ni... View
phydeaux - 1 hour ago
A few points if I may, starting with your first post in this sub-thread where you start: ".... is literally no good evidence... View
TheSilver - 5 hours ago
Yes, I'm aware there are observational and laboratory studies. I am sceptical of those because it isn't obvious how transfera... View
News 1

@the_riotact @The_RiotACT
The ACT has recorded 620 new cases of #COVID-19 in the 24 hours to 8 pm yesterday. Of those, 61 people are in #hospital, with five in #ICU and one person requiring ventilation https://t.co/yrOFhW3j7d (43 minutes ago)

@the_riotact @The_RiotACT
#Moncrieff residents are pushing for the ACT Government to remove a #smelly and hazardous 'sludge pit' from their backyard. The petition has already attracted more than 400 signatures https://t.co/fW6ONtnb5f (50 minutes ago)