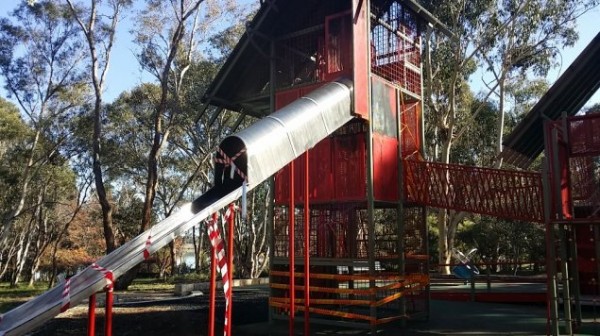 Vandals and arsonists have wreaked a trail of havoc in Tuggeranong, Gungahlin and Belconnen playgrounds and public toilets in recent weeks, contributing to the ACT’s annual vandalism bill of around $120,000.

A fire in the Yerrabi Pond District Park public toilets last Wednesday caused damage to cubicles, and was the second incident within two weeks, with similar arson attacks on Yerrabi Pond and Tuggeranong Town Park facilities on May 17.

Department of Territory and Municipal Services spokeswoman Fleur Flanery, who is director of city services, said a bin had been set on fire inside the snake house play structure at John Knight Park earlier in May causing extensive damage to paint and rubber surfaces.

She said such vandalism prevented the community from enjoying public facilities and was a burden on the ACT Government budget.

“It means resources need to be directed away from other important services. In addition to the cost of repairs, there are often ongoing costs when the replacement or redesign needs to be changed in an effort to mitigate further damage,” she said.

“ACT Government playground inspectors estimate that 90% of all repairs undertaken at playgrounds are a result of vandalism. This equates to about $120,000 per year vandalism at Canberra playgrounds.”

Ms Flanery said the most frustrating examples of vandalism were those when the destruction of equipment was clearly planned rather than just a random act.

People who witness or are aware of vandalism should call Crime Stoppers on 1800 333 000 or report it to www.act.gov.au/fixmystreet

If this is happening at the same locations, would it not be prudent to install a surveillance camera to at least get an idea of what the offenders look like? You can get battery powered hidden cameras that record footage in quite good detail for a few measly hundred dollars. I’m sure the $120,000 repair bill is worth at least spending a bit of money on a few cameras so the culprits can be caught in the act.
Then again, they’re probably a bunch of teenage kids with deadbeat parents who couldn’t care less, so it won’t be worth the hassle of trying to prosecute them as a slap on the hand and no prospect of recouping costs isn’t worth all the effort.

Barr has other priorities than having police on the streets, with 1 police car with 2 cops online at Gungahlin at night
what do you expect when their are no police around at night