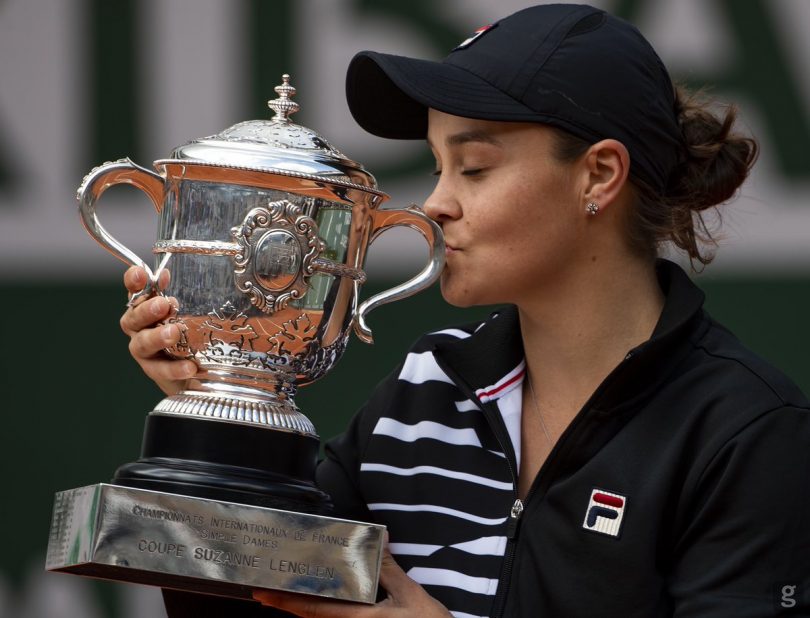 Ash Barty with the French Open trophy after her win. Photo: Twitter.

As Australians everywhere celebrated a cool, calm and collected but absolutely thrilling French Open win for Ash Barty on the weekend, many commentators noted that she is the second Aboriginal woman to win a Grand Slam title, following in the footsteps of Evonne Goolagong.

But few have realised that the Ipswich raised Barty, in fact, has a connection with southeastern NSW and the High Country stretching through to Gippsland. Through her father, she claims Ngarigo ancestry from the people of the Monaro and High Plains and has spoken about valuing and re-connecting with her heritage.

Barty’s great grandmother was a Ngarigo woman and she told journalist Konrad Marshall in 2017 that her heritage was “really important to me. I’ve always had that olive complexion and the squished nose, and I just think it’s important to do the best I can to be a good role model.”

In 2017, Barty was Sportswoman of the Year in the National Dreamtime Awards, and in 2018 was named National Indigenous Tennis Ambassador and won the Newcombe Medal, the highest honour in Australian tennis.

Her story echoes that of Wiradjuri woman Evonne Goolagong Cawley. As a child, the prodigiously talented Barty used an old wooden tennis racquet she’d found in the family garage to hit a tennis ball endlessly against the house wall after school.

Goolagong Cawley famously first honed her Grand Slam winning skills with a wooden bat and a tennis ball, using the corrugated iron on the family water tank in her western NSW hometown of Barellan to vary the return angle. Her father had cut the wooden bat from a milk crate and Goolagong still carries it with her to show that determination and practice are the best routes to success.

The legendary Australian player has been an important mentor to Barty in the intervening years and the young star has acknowledged how important that relationship has been in the wake of her French Open title. When Barty was burned out in 2014 and ready to give up on her tennis career, she says that her mentor backed the decision to take a break and re-direct her energies.

Goolagong Cawley sent a text suggesting that Barty take a break, re-set her mind and, in her words, “Go and wet a line.” Barty took time off to play cricket before returning to tennis three years ago, ranked at 623rd in the world. After her victory this weekend, she is now the world Number Two.

Barty’s success at the Open was celebrated by the Aboriginal community, including messages of heartfelt support from Cathy Freeman, Nova Peris and Professor Marcia Langton. And after the win at Roland Garros, she acknowledged Goolagong Cawley’s powerful influence both as a personal mentor and an inspiration to generations of Aboriginal kids, creating a path for indigenous tennis.

Barty told Tennis Australia in a recent interview that her family is “very proud of our Ngarigo tribe,”

“I’m an extremely proud Indigenous woman and being able to travel the world and show off my heritage in a way and show off that I’m a true blue Aussie, as true as they come, is pretty amazing.”

Tina Maree Williams - 28 minutes ago
My other half and I saw the writing on the wall when the eyesore of Whitlam increasingly impinged on our view driving down Wi... View
Demi Naylor - 8 hours ago
Well.. you know.. f they can afford a house or find one suitable to rent.. View
Julie Macklin - 8 hours ago
Marc Edwards That can made it worse for public transport. It's okay for those living nearby, but for people in other parts of... View
Opinion 65

Marc Edwards - 10 hours ago
Maybe the Berra Party View
Paul Leins - 11 hours ago
Sure, just bet a former liberal will be a real check to his mates in the liberal party 🙄 View
Michael Ilsley - 11 hours ago
Glad to see him engaged in the community after the tragic loss of his son. View
What's On 1

Where have all the characters gone? Quashing personalities in sport

@The_RiotACT @The_RiotACT
The Canberra Hospital Expansion project start is within sight. Will it deliver the goods, and on time? https://t.co/VlDl3D7QxQ (54 minutes ago)