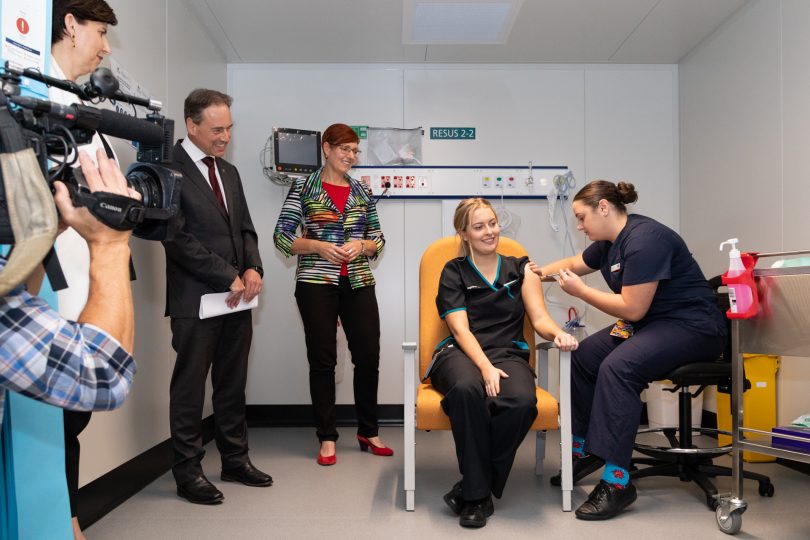 Around 1000 frontline workers were vaccinated in the ACT last week. Photo: Michelle Kroll.

The AstraZeneca vaccine will begin rolling out in Canberra next Monday (8 March) after 300,000 doses arrived in Australia over the weekend.

ACT Health Minister Rachel Stephen-Smith said the Territory was still in conversation with the Commonwealth about allocations as Australia prepares to roll out around 1 million doses of the vaccine each week from late March.

“Most of the conversations we have been having are around getting our population share of that. We are about 1.5 to 2 per cent of the Australian population, so you can expect that would be what we would see in terms of doses,” she said.

“There is some allowance for some higher numbers of doses in relation to those jurisdictions that are taking the weight of the mandatory hotel quarantine for returned Australians; they have a much higher number of frontline staff in the border and quarantine processes that are eligible under phase 1a.

“By the same token, there is some allowance that the ACT is a provider to our surrounding region as well.”

Around 1000 frontline workers and 1000 people in disability and aged care residential facilities have already been vaccinated in Canberra after the Pfizer vaccine was distributed last week.

This capacity is expected to remain steady until additional doses of the Pfizer vaccine and the AstraZeneca vaccine – which is easier to store than the former – become available.

The AstraZeneca vaccine is being batch tested by the Therapeutic Goods Administration (TGA) to ensure it meets Australian safety standards.

Ms Stephen-Smith said that both vaccines are safe and effective and urged Canberrans to receive whichever jab they are offered amid reports that people in Europe had been refusing AstraZeneca for Pfizer, which some trials showed had a stronger efficacy. 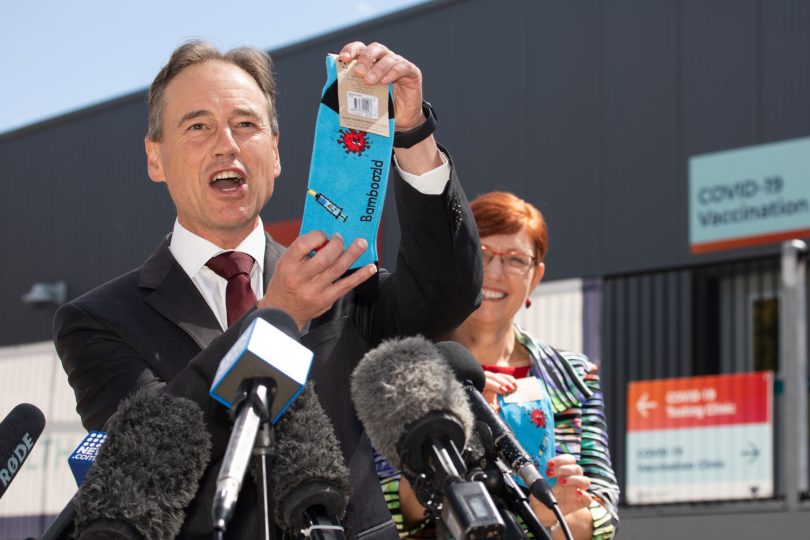 The advice from the Secretary of the Commonwealth Department of Health and the Chief Medical Officer is that there is more and more evidence that the AstraZeneca vaccine is just as safe and effective as Pfizer, she said.

“On 15 February 2021, the World Health Organization said, ‘This regimen was shown in clinical trials to be safe and effective in preventing symptomatic COVID-19, with no severe cases and no hospitalisations more than 14 days after the second dose’,” Mr Hunt said in a statement.

“Having AstraZeneca available in Australia provides an easier avenue for distribution across the nation, meaning people in rural, regional and remote areas will not have to travel as far to receive their vaccine.”

Australia will manufacture 50 million AstraZeneca doses onshore, while a further 51 million doses of a third vaccine from Novavax will be delivered pending TGA approval.

No guarantee the Federal authorities will be able to supply Pfizer or Moderna to the over 60s any time soon or indeed will worry about doing so. Disturbing to hear the rollout (‘prick -a-thon’?) for the 30-40s will likely be delayed because of the rush by those in their 50s; a real shame if those who should expect a long and productive life ahead of them are afflicted by Long Covid, and another indictment of our incompetent Federal Government.

Supply has been the issue since day dot.

What annoys me is how the federal government has spun it all. The issue was they backed the wrong horse initially (the Queensland Uni vaccine) personally I don’t have an issue with that seeing where we all were at that point. It could have turned out differently the Queensland Uni one may have been fine and Pfizer not so. Bit turn out the wrong way.

But as I said the issue is the sales pitch since has sent the wrong message to protect the fact supply was limited. Comments from the PM such as it’s not a race. Frankly it was and still is. That mentality as well as the issues with astra zenica have created distrust which will hamper the future of the rollout.

And now the whole thing being headed up by a military person, same old for the Libs.

Depends how you define better. Again hindsite is wonderful. But those who did get in early wouldn’t have agreed with you if for example there was a widespread outbreak.

I’d have thought people would be more comfortable with the vaccine that uses a tried and tested delivery mechanism over being a lab rat in the mRNA experiment anyway.