At long last the Molonglo Reach bike path to be restored 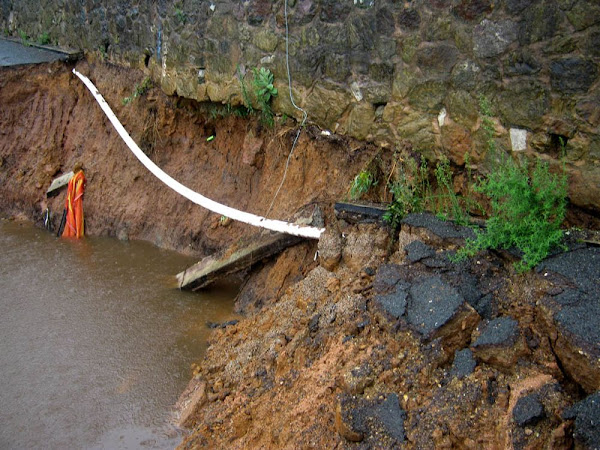 Kevin Rudd was Prime Minister the first time when idiots removed the trees on Molonglo Reach and were then surprised by the shifting river devouring the infrastructure.

Happily TAMS can now report that after all these long years they’re going to put the bike path back:

Work has commenced on the installation of the new Molonglo Reach pedestrian bridge, Territory and Municipal Services announced today.

“The bridge, which previously connected the Belconnen Mall and Lathlain Street and was known locally as the ‘red bridge’, will be painted grey to blend into the landscaping.

“The bridge option is necessary due to the poor soil conditions along the river edge which make the replacement of the path difficult.

“Work has recently commenced and should be complete by December 2013.

“Morshead Drive will remain open throughout the works, however it will be closed over one weekend late in 2013 while the bridge is lowered into place. Alternative routes will be provided during the closure.

I cant help but wonder if there is a secret stash of all the old ACT hardware and assorted stuff somewhere?

It’s all sitting on the bottom of LBG.

I remember when the red bridge was new.

I see a grey bridge and I want to paint it red! 😛

So glad that silly little “icon” will get another gig. And the kids are over the moon. They miss their favourite meeting place. How many countless Belco parents have dropped their teenagers off at “the Red Bridge” over they years.

I cant help but wonder if there is a secret stash of all the old ACT hardware and assorted stuff somewhere? Wouldn’t that be a time capsule and a half!

There has been a bit of action there for a while. The 60 zone has been extended and there have been some portable buildings put onsite for the workers.

A while ago they were doing core drilling on the site, I dare say the delay has been trying to work out what to do with it as I would say its not that simple. My guess is they will have to re-inforce the bank with a wall as there is nothing to stop it washing out again & the road falling into the drink.

Its not just a simple case of chucking the bridge in there.

Maybe TAMS could get around to also updating their FAQ on the bike path project, http://www.tams.act.gov.au/about-us/community_engagement/recent_consultations/molonglo_reach_pedestrian_bridge , that still says it was due for completion in February 2013 or do we just know to add 6 plus months on to any timeframe TAMS says or any works.

…was known locally as the ‘red bridge’, will be painted grey to blend into the landscaping…

When are they going to put the final top coat on that bright orange bridge in Kambah (over Drakeford Dr)?

…and how quickly will the grey paint take to fall off and make the Red Bridge red again?

…was known locally as the ‘red bridge’, will be painted grey to blend into the landscaping…

When are they going to put the final top coat on that bright orange bridge in Kambah (over Drakeford Dr)?

JC - 14 hours ago
The paper is still going to be made. View
Rebecca Hosking - 18 hours ago
Jane Larkin Naomi Feuerherdt Kim Beaumont This is a bit sad 😥 Remember our team photos on the massive reams of paper 😊... View
Acton - 1 day ago
A local paper that has a rabidly biased weekly column from a once amusing but now worn out journalist who intentionally and r... View
News 6