The ANU have revealed their new super computer and I have some serious tech-envy.

It’s called the Raijin, it’s the most powerful computer in Australia, and I want one.

The nation’s most powerful computer was officially launched today at the opening of the National Computational Infrastructure (NCI) high performance computing centre at The Australian National University (ANU).

Named after the Japanese god of thunder, lightning and storms, Raijin can perform the same number of calculations in one hour that would take seven billion people armed with calculators 20 years.

The supercomputer is the largest in Australia, and will enable researchers to process vast volumes of data that would otherwise take years to complete, and simply not be possible using desktop computers.

“Advanced computational methods form an increasingly essential component of high-impact research, in many cases underpinning discoveries that cannot be achieved by other means, as well as underpinning the platform with which to sustain innovation at an internationally competitive level,” said Professor Lindsay Botten, Director of the NCI.

Capable of running at 1.2 petaflops (a measure of speed) when performing at its peak, Raijin can complete 170,000 calculations for every human on the face of the Earth, every second.

The computer’s speed enables researchers to run complex models. They might, for example, seek to understand the forces that bind the building blocks of our universe, to ‘supercharge’ the photosynthesis of virtual crops or to understand the dynamics of the world’s oceans and their impact on the climate. 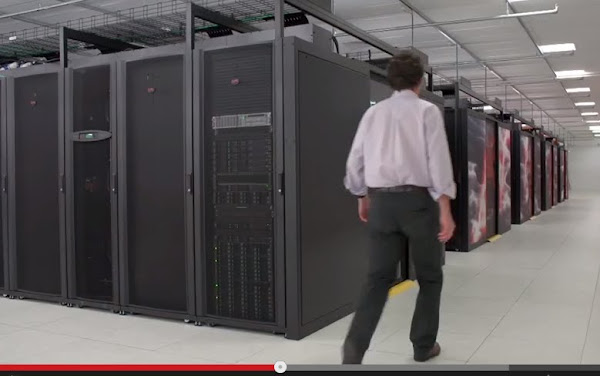 I wonder what games they’ve got installed on that bad boy.

That has always been the case, as computers got more powerful programmers got lazier so the software is less efficient in a computational sense.

haha, had an APC UPS for a couple of years, boy what a piece of…

I had hoped that was just their consumer gear and their professional data centre stuff was better quality, but judging by your post, I take it that’s not the case.

Fond memories of working on some of the ancestor systems at ANUSF (NCI). Lots of joy porting code and using multiply nested makefiles to compile code with proprietary binaries. (Of course the bugs were in the binaries!)

Regarding the defence computers speculated by dungfungus:
“Late last year, Australia achieved its best global supercomputer ranking with a new Fujitsu Primergy system at the National Computational Infrastructure National Facility at the Australian National University featuring at No.24 in the top 500. The list, compiled by a group of academics in Germany and the US, provides a picture of supercomputing facilities across the world.
A supercomputer called Avoca, housed at the Victorian Life Sciences Computation Initiative, came in at 33. The new DSTO supercomputer is not expected to be as powerful as these.”

Detour: Regarding games on supercomputers (and mainframes):
In the old days, mainframes often had command line command length limitations and Colossal Cave Adventure was also known as ADVENT (6 letter command to run it). Discovered it in the early 1980’s on the DEC-10 at RMC – which kept me awake during late night batch debugging sessions. One can get the app now to run one one’s favourite portable device – DEC-10 took up an entire room – not portable – but much friendlier (with an almost English like command language!) than the CDC and IBM machines; Unix was in some ways a step to more arcane language than TOPS-10.

and when it freezes, how long will it take to take to turn it off and get it up and running again, like the indian guy on the helpdesk will suggest..?

As with all proper systems, should it freeze I imagine there would be a serious investigation of what had gone wrong.

I did say “I think” which is a prerequisite for posting on this blog. If you don’t agree with that just say so.

Australias most powerful super computer? No.

That has always been the case, as computers got more powerful programmers got lazier so the software is less efficient in a computational sense.

I was thinking more along the lines of power consumption –

Raijin does 1.2 PFlops peak and draws just over 5MW peak
Titan does just under 18 PFlops typical and draws 8.2MW peak

So Raijin cost about half as much to build as Titan, draws about 60% of the power but only offers 8% of the performance.

Can’t claim to be an expert in this stuff, but doesn’t seem like good value, either in up front expenditure of the ongoing costs to power it.

Interesting that it’s an entirely Xeon based computer, I thought a lot of super computers these days were using a mix of general purpose processors and GPU cores.

The #2 supercomputer in the world for example uses a blend of AMD Opterons and nVidia Tesla chips.

What else would you use it for?

ANU students already have fast access for all that stuff. I lived on ressies in 1999 and our download speeds in our rooms back then were still quicker than you get on Transacts best plan today. Mp3’s downloaded quicker than you could click to download the next one.

With a bit of luck this technology won’t be sold off overseas due to it not being easy to move.
I did notice Fujitsu logos on the TV news story so one wonders what corporate arrangements are in place.

Seeing is it would be utterly useless in that role compared to their phones.. I’m guessing very few.

Latoya Wedlake - 4 hours ago
Joel Davies this is prefect.. my birthday coming up soon 🙂... View
Natalie Murnane - 7 hours ago
The two golf courses next door aren't enough? View
Frank Murnane - 9 hours ago
Would need to clear the trees for a chipping green View
News 36

Elroy Jones - 8 hours ago
Bill Pappas a new hospital is on its way in Woden and another one was built last year. No vested interests other than making... View
Community 3

@The_RiotACT @The_RiotACT
Wondering about the best ways to talk to your young children about coronavirus? Here are some expert tips https://t.co/uv6q0PBSMi (7 minutes ago)