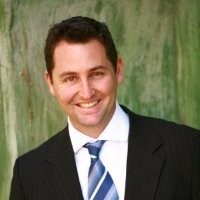 From managing a multi-million dollar online auction site, caddying on the Pro-Golf Tour, to teaching cricket to street kids in India, Rob is one of Canberra’s most well respected entrepreneurs.

Rob’s natural ability with numbers and his outgoing personality, saw him move from working with some of London’s biggest banks, to calling auctions at Grays and eventually opening his own business, ALLBIDS in 2002.

His passion for health and wellness has influenced many of his business ventures as well as his approach to management in and out of the boardroom. He’s run three marathons including the New York and Berlin Marathons.

Growing up in Canberra, Rob is an avid supporter and sponsor of the Canberra Raiders and sits on the board of Royal Canberra Golf Club where he is focused on many challenging projects including a $6million development of the course and additions to club facilities.

A big-picture thinker, Rob is passionate about accelerating Canberra to compete on the international stage for business and sporting events. This includes bringing international tournaments to the city and becoming an Asian freight hub.

He also hopes to align with more government agencies and private operators to adopt his ALLBIDS mantra ‘re-use is the best form of recycling’, through various corporate initiatives.

His philanthropic work includes supporting many charities and local community groups such as Lifeline, Canteen and the Heart Foundation.

Waste proposal a planning debacle that will ruin Fyshwick

Ezekiel Chalmers - 41 minutes ago
You know, maybe the Protestants have that one right; if the scripture isn't accurate enough that you should follow it, maybe... View
Nick Beaton - 48 minutes ago
Ezekiel Chalmers please, enlighten me with examples - and may I just add that, as Catholic, Sola Scriptura (only scripture) i... View
Ezekiel Chalmers - 58 minutes ago
I always thought it was weird that hardcore religious people opposed something that wasn't mentioned in the Bible, but ignore... View
Community 16

Carmen Cassar - 1 hour ago
When are hairdressers and nail technicians opening . It’s more likely to catch Covid from a supermarket. Mental health is g... View
Anthony Beck - 12 hours ago
Why can some training companies continue face to face training, and in a classroom environment, but transport training cannot... View
kenbehrens - 13 hours ago
Roy, I've always been concerned about the active type of exerciser. The runner, the cyclist etc and how that type of activity... View
Community 3

Jay Franchi De Luri - 3 hours ago
Mark there is still time for a few cutlets…. Amy View
Julie Marshall - 4 hours ago
After the fight ppl did so McDonald’s couldn’t get it you have now dropped the fence ;(... View
Christine Cole - 7 hours ago
Yes it is Sharon Merten. Big and long fight. Proud of their resilience and determination. Also proud of making a big decision... View
News 7

buzz819 - 5 hours ago
I still don't get why? The exposure sites are all over Canberra. Just because you want to know something, doesn't mean it is... View
kenbehrens - 10 hours ago
CBR Check-In App now sends push notifications for potential exposures. Yet, public transport services are still being listed... View
realopos - 14 hours ago
Here's a thought. We allow all double vaccinated people their freedom- Now! - only those vaccinated can roam freely? Benefits... View
News 56

Susanne Levy - 10 hours ago
Building this to be used by tumbleweeds . Maybe stop getting us into debt for things we may never use again considering our s... View
Business 2

Peter Hislop - 10 hours ago
Unfortunately state and territory governments can only heed medical advice about risk/benefit of each change up or down. Feds... View
News 14

Maya123 - 11 hours ago
I am over 60 and I didn't hesitate to get AZ (AstraZeneca), as it's safe, especially for older people, and risking staying un... View
chewy14 - 14 hours ago
Yeah, almost none of what you just said is true. The Astra Zeneca vaccine is extremely safe and equally as effective as Pfize... View
News 24

Capital Retro - 12 hours ago
Your comment is well founded because in the USA limitations of land use for these abominations is now being exceeded (see vid... View
Business 108

Capital Retro - 14 hours ago
The headline in the first link it totally misleading. The proposed legislation says it will be a requirement for every new ho... View
Property 2

Capital Retro - 15 hours ago
Residents of East O'Malley and Red Hill will enjoy the aroma drifting their way under the inversion layer. View
show more show less
*Results are based on activity within last 7 days

Here's some news that might just bring you to tiers – baking legend Dobinsons is on a roll – making all your...
Opinion 43

If you've got a spare five hectares, a shed and some cattle yards, you could throw a lifeline to some...
News 14

UPDATED 5:00 pm:  Students from one of the University of Canberra's lodges have been contacted to inform them that a...
News 6

UPDATED 2:30 pm: In response to today’s announcement that the NSW Premier Gladys Berejiklian and Health Minister Brad Hazzard will stop...
*Results are based on activity within last 7 days

The promise of better light rail access to the Mitchell business hub is now a reality with services commencing on...
Opinion 32

NSW Premier Gladys Berejiklian will be missing from our screens at 11:00 am today, and some may think that's a...
News 24

@The_RiotACT @The_RiotACT
Did anybody seriously believe that the ACT lockdown would not be extended this week, asks Ian Bushnell https://t.co/hJkBRdXmGv (2 hours ago)

@The_RiotACT @The_RiotACT
The @NFSAonline has unearthed a rare recording of a @ledzeppelin interview that features in a new documentary on the legendary rock band https://t.co/YSn9EwPTIR (12 hours ago)

@The_RiotACT @The_RiotACT
Dobinsons is on a roll and bringing their baked goodies to a street near you. Find you how you can get your fix to make lockdown a little sweeter https://t.co/z8IGWiEGyy (13 hours ago)