Awards For The Youth, Nominate Today! 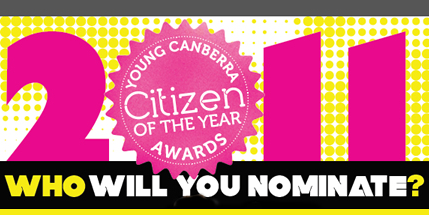 Today is the last day to nominate young people for the Young Canberra Citizen of the Year Award!

When Cadel Evans won that bike race, I didn’t much care. When Cathy Freeman won that running thing, I yawned. When Batman was dangling The Joker off the roof in his triumphant blaze of heroism, saving Gotham from more distress and torment, I fell asleep. But, when I saw Anthony Antioch win the 2010 Young Canberra Citizen of the Year award, I felt good. Maybe not dancing and singing good, but I was honestly impressed with the his list of good deeds.

Luckily, the excitement starts all over again with the nominations for The Young Canberra Citizen of the Year Award for 2011 now open and closing tomorrow (aug 23)!

Yes, it’s that time to look around the neighbourhood (quickly) at all of those fresh young faces playing stick ball and eating moon candy, and ask “are you worthy?”, “Are you Canberra’s young citizen of the year?”

As well as the grand prize, there are several categories in which a special young ones can be nominated:

Winning the Young Canberra Citizen of the Year 2011 grand prize? $2000

Knowing that everybody at school is jealous of your success? Priceless.

Get involved! Celebrate that which should be celebrated, nominate those who should be nominated!

Make a list and check it twice, who under 25 has been naughty or nice? …or exceedingly good in the arts.

Jack Wiles - 7 minutes ago
It's not the type of meeting place depicted by so many comments; it's not somewhere you would take young family but is a plac... View
News 15