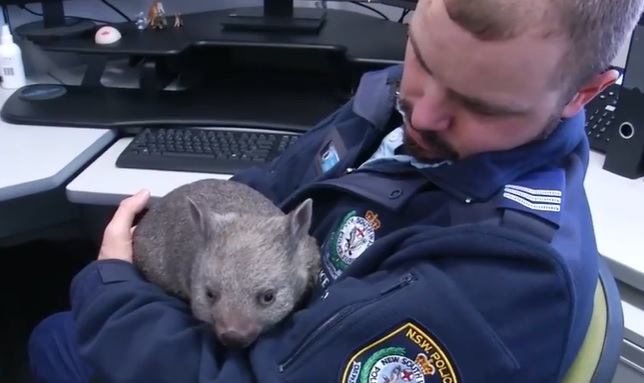 Ted the wombat is the latest recruit at Queanbeyan Police Station. He was rescued by Senior Constable Tori Murray after his mother was stuck and killed by a car in June. Photo: NSW Police.

Monaro Police District’s Senior Constable Tori Murray took in orphaned bare-nosed wombat Ted after his mother was struck and killed by a car in late June 2020.

Since then, eight-month-old Ted, a lively little guy, has been a regular fixture at the station, often found taking a nap in his portable bed under Senior Constable Murray’s desk or curiously following other officers around.

Ted will remain in Senior Constable Murray’s care for at least another year until he is old enough to be returned to his natural habitat.

For the past five years, Senior Constable Murray has volunteered with Wildcare to help rescue, care for and rehabilitate injured native animals across the Monaro region.

Monaro Police District’s Inspector Charles Hutchins said all the officers have taken to Ted and enjoy having him at the police station.

“The care that all of our officers are showing Ted is definitely the same care we provide to the community,” he said.

“Here at Monaro Police District, we take our jobs very seriously and part of that is providing an excellent level of customer service.”

Inspector Hutchins said that, unfortunately, crashes involving animals regularly occur on our roads and urged drivers to keep an eye out for them while travelling.

“With school holidays and everyone travelling along the highway, we encourage people to be aware of your surroundings, which may include our native wildlife,” he said.

“If you see an animal near the road, we encourage you to slow down, if possible, exercise caution and drive to the conditions so that way we’ll show some kindness to the animals by the roads.”

There’s a new furry recruit patrolling the halls at Monaro Police District after one of its officers took in an orphaned baby wombat, Ted.Stay Kind #kindjuly #staykind

Ted is so cute. Saw him on the news. What a wonderful thing for the Queanbeyan Police to do.

How old does Senior Constable Tori Murray have to be before he can be returned to his natural habitat?

Barry Finch Ted the wombat will be around two years old when he is released.

Well done Queanbeyan Police Station and Senior Constable Murray. It is great to get some good news stories for a change amongst all the COVID-19 news. 🥰 🐾 👮‍♂️

Is the station getting advice about the correct marsupial food brands?

Kathy Schneider the wombat is under the care of a licensed wildlife carer who happens to also be a police officer. So he is getting the correct marsupial milk replacement he needs.

Ah, I see the antifa spy is doing well

This is such a lovely story! 💛