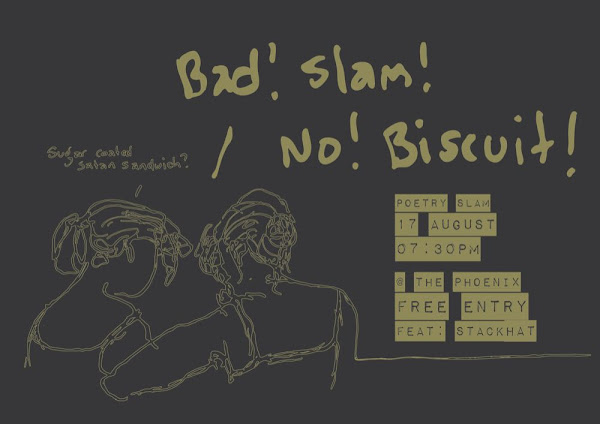 Facebook brings word of the next installment of Canberra’s lewdest poetry slam:

More Info
THE ALL NEW BAD!SLAM!NO!BISCUIT! BRINGS YOU WORDS!
and a stage, 2 minutes, a microphone, the Master of Conflict,
an audience, five judges, at least three first prizes and two MCs

And puts all that in a pub with cider, beer, whiskey and all kinds of other alcohol

So you can drink and perform words and listen to words
and JUDGE or BE JUDGED!
AND WIN!

“a master class in elegance and poise”

And because mesmerising you with dance is not enough, BAD!SLAM!NO!BISCUIT! also brings you:

Self-described as uber-brutal psychedelic goth-hop OR fucked up music, for fucked up people, Stackhat lists Jeff Buckley(?) as an influence, the question mark meaning yes Jeff Buckley was run-over by a passing overhead speedboat that was playing Leonard Cohen’s Hallelujah.

730pm sign-up, words start at 8pm, join your host Jacinta, Andrew Galan, the Score Adder and the Master of Conflict at BAD!SLAM!NO!BISCUIT!
No music, no props, original material, 2 minutes, did I forget anything?

Oh yes, and it’s in The Phoenix, East Row, Civic. Make mine a pint of Jolly Miller!

Nick Antic - 6 hours ago
Wait..why would you freeze yourself when you die? Shouldn't you do it before you die?? View
Timothy Ingold - 11 hours ago
Michael Dolan what’s wrong with you? View
Ray Pemberton - 11 hours ago
Aidan Pemberton I'm good. View
News 16

Daniel Bryan - 6 hours ago
This, Oaks, A+A, Grand Central, Ivy, and Trilogy definitely bringing more residents into the Woden valley isn't a bad thing.... View
Michael Jayfox - 7 hours ago
Mat Barber please explain how you think that new parking ramps will stop it from being an eyesore View
Tristan Wellens - 7 hours ago
Will only rent for about $500 a week per smaller unit 👌🏻 View
Food & Wine 4

Josh van Limbeek - 10 hours ago
What a great article! My Mum is a Red Hatter and she has so much fun too ❤❤ View
Jo Jo Joey - 11 hours ago
Barbara Bennett, I love how much enjoyment your ‘red hatters’ gives you’ 🎈💜❤️💜 View
Property 27

Elroy Jones - 10 hours ago
Peter Bee there are a lot of places it could go. Majura the most recent I’ve heard. View
Christopher Cuba Rabanal - 10 hours ago
Better lighting around the carpark View
Andy Sell - 11 hours ago
2 words mate, lite rail View
News 17

Mookie Moo - 11 hours ago
Assuming this means 80% by Oct within the adult population only? Because roughly 20% of the population would still be kids, w... View
News 1

Theresa Rowan - 12 hours ago
Margaret Smith was in my class at St Clare's a gentle soul RIP. View
show more show less
*Results are based on activity within last 7 days

@The_RiotACT @The_RiotACT
Michelle Heyman's stunning return to football began with a simple question on Instagram: “Hands up if I should make a comeback to the W-League?" https://t.co/UNn8rDWuj3 (9 hours ago)

@The_RiotACT @The_RiotACT
The 2021 Australian of the Year is Grace Tame. Grace is an outspoken advocate for survivors of sexual assault, particularly those abused in institutional settings https://t.co/Q6nMb1PGRL (10 hours ago)

@The_RiotACT @The_RiotACT
Times have been ruff, so @QTCanberra has rolled out the pet-friendly red carpet & opened its doors to allow furry best friends in their luxury hotel rooms https://t.co/V89hSF18w9 (11 hours ago)