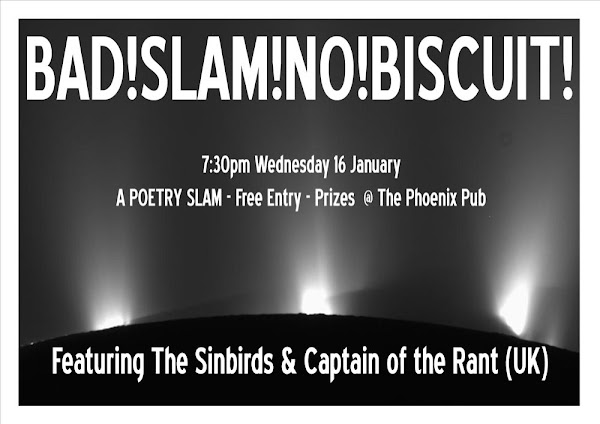 BAD!SLAM!NO!BISCUIT! is inside the Phoenix Pub for 2013, which means you get two microphones, a stage, plenty of sound, prizes and more prizes, audience, clapping, prizes, judges, cheering, heckling, and the chance of glory! With MCs too, and scoring along with adding, prizes, conflicting, and poetry, especially poetry, at the Phoenix pub, this is a poetry slam.

Yes, we want what words you’ve got on stage at the Phoenix!

And this month we will be featuring the Captain of the Rant with his poetry.

This is Captain of the Rant’s bio:
“London-based Captain of the Rant has been performing his uniquely witty, fiery spoken word since May 2008. He has performed all over the UK, Thailand and Malaysia, and has now come to Australia to inform the uniformally chilled out populace that there is still very much to be angry about.”

This is The Sinbirds’ bio:
“Having discovered the records of their grandfather and his backing band (Johnny Paul Blood and The Sacrificers), Davey and Frankie have spent a considerable amount of time re-recording the tracks; to suit modern tastes, to bring jukebox heartbreak back to the masses, and to pull their grandfather out of the dark corners of Australian music obscurity and into the light of fame which his hard work and groundbreaking music deserves. This is the Sinbirds.”

And filling the Hadley Memorial Poetry Slots in the Phoenix Pub for a mini-feature will be Raphael Kabo — Senior Kabo to you, you crusty old poets.

So be at Bad!Slam!No!Biscuit! on 16 January with your words, your hands, your judges, your poetry, for poetry, for prizes, for all kinds of stuff like stuff.

And remember, 2 minutes, no music, no props, and your original material at the Phoenix Pub.

Bec French - 3 minutes ago
GO cut something else down!!!! leave them be! View
Julie Macklin - 45 minutes ago
It would be interesting to know how many accidents have happened here and over how many years and when; the actual figures. A... View
Wob Bert - 4 hours ago
It is happening because some people can't keep their cars running straight on a wide straight strip of road. Who is at fault... View
News 4

Nick Anderson - 2 hours ago
Just to add on, the snowy mountains are already feeling the stress from Climate Change: http://press-files.anu.edu.au/downloa... View
Nick Anderson - 2 hours ago
Funny. A ski resort implies that it would still snow in the foreseeable future. A future without severe climate change. Last... View
Rainer Busacker - 3 hours ago
It takes vision and a we can do it attitude. With local participation. We have enough naysayers.... View
Opinion 14

Louise Flood - 2 hours ago
A nice idea but how will our esssential workers do this? Nurses, fireys etc. View
Kurt Neist - 4 hours ago
I wash dishes, order supplies and do deliveries. Can’t do any if it from home. At least the pay is rubbish...... View
Paula Simcocks - 4 hours ago
For older women who frequent public toilets when out, or those in restaurants etc , I want to see these areas much better mai... View
News 14

Mark Scarborough - 2 hours ago
As long as it is cheaper than flying. View
Justin Watson - 3 hours ago
Yeah it wouldn't be too expensive to get rail travel down to 2 1/2 hrs between Canberra and Sydney. A 1 hr fast train would b... View
Rainer Busacker - 3 hours ago
VFT would allow commuting for work and expansion of the Min ago Canberra region View
News 30

Elroy Jones - 3 hours ago
Completely agree View
duc nguyen - 4 hours ago
No one comes to Canberra and thinks the current West Basin is the place to be. Even though it is at the heart of the Nation's... View
Neil Chandler - 8 hours ago
I would have thought that whatever "heritage" the area had, both european and indigenous would have been pretty much devastat... View
Food & Wine 5

Rose Mary - 8 hours ago
David Blanchfield put it on the menu! View
News 4

Greg Garth - 12 hours ago
Gabriel Spacca Or a mixture of smoke and steam. View
Gabriel Spacca - 15 hours ago
If you pour water on fire it’s likely to cause more smoke not less. View
Sport 31

Nikos Manikas - 15 hours ago
Dianne Latimer if Brisbane get a 2nd team then all Ch9 will do is alternate between the 2 Brisbane teams. just like now they... View
Food & Wine 128

Mystery surrounds a loud bang heard early this morning in Belconnen and Gungahlin but it's not the first to be...
Community 138

The $200 million Monaro Highway upgrade is a step closer with the release of concept designs for a southbound flyover at the...
Best of Canberra 112

@The_RiotACT @The_RiotACT
The ACT Government has brought forward almost $10 million worth of screwdriver-ready projects to help mitigate the COVID-19 downturn https://t.co/poe4TyaRqM (24 minutes ago)

@The_RiotACT @The_RiotACT
Resources developed for virtual excursions to Old Parliament House have been put to good use during COVID-19 restrictions but will also help remotely located students from across the nation to visit the Museum of Australia Democracy https://t.co/grpAeze1pX (1 hour ago)

@The_RiotACT @The_RiotACT
Founders of Fortem Australia aim to support law enforcement & emergency service workers in the way that Soldier On has done for defence personnel https://t.co/qZBYhgppeh (3 hours ago)