BAD!SLAM!NO!BISCUIT! – Slamming arrives in the interchange 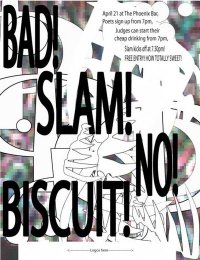 The poetry slam craze is coming to Civic with a new slam starting at the Phoenix, planned for every third Tuesday of the month.

BAD!SLAM!NO!BISCUIT! is a new Poetry Slam starting in THE CANBERRA that will give ANYONE a microphone, and audience, and 2 MINUTES to perform WHATEVER. They will then be JUDGED by five judges chosen from the audience who PREFERABLY HATE POETRY, BUT WHO LOVE BEER!

Yes, we will be hoping to get our poetry-hating judges as drunk as possible as they score YOU between 10 and Negative Infinity! The highest and lowest scores are dropped, and the three remaining numbers are added together WITH A CALCULATOR and the highest score WILL WIN FIRST PRIZE. Not to be out done by other Poetry Slams that only have one first prize, a random scoring system will be used to produce a second FIRST PRIZE WINNER! YES! Two winners. Then, again to doubly not be undone, a third person who has never slammed before, also wins!!!!!! Three winners! Exclamation mark!

BAD!SLAM!NO!BISCUIT!
April 21 at The Phoenix Bar, in the bus interchange
Poets sign up from 7pm, Judges can start their cheap drinking from 7pm, Slam kicks off at 7.30pm!
FREE ENTRY! HOW TOTALLY SWEET!

14 Responses to BAD!SLAM!NO!BISCUIT! – Slamming arrives in the interchange
Filter
Showing only Website comments

I am sooooo going to this. Sounds like a hoot.

Oh, I would have loved to hear about how you were a magical fairy princess! I can’t believe I could have missed such a big moment!!

It was about how I am a Magical Fairy Princess.

There are some great drunken poetry moments from babble Slam on youtube, especially Steve Smart abandoning his poem midway through to heckle the audience.

What was the piece you scored negative infinity for, Hadley?

Beer and poetry – creator of such poetic classics such as:

I was the first person to ever be scored a negative infinity at Babble Slam in Melbourne. As the nature of Poetry Slams go, it was an honour.

I hope someone gets negative infinity from all five judges. After taking away the highest and lowest score from those scores, they can add THAT into their calculators.

Then you are a perfect judge. If you can’t come to the Slam then we will come to your lounge room and perform there. At 3am.

I don’t know if I hate all poetry, but I really hate people reading poetry aloud, especially poetry they wrote themselves.

We are actively looking for judges who HATE poetry. Your hatred will earn you cheap beer.

Two minutes of “nutter of the month”?

Even though I would probably hate it, that rant makes me want to attend. I’ll have to work on my shopping list.

Patrick Harrington - 18 minutes ago
Dannii Harrington this one? View
Susan Anderson - 1 hour ago
Fiona maybe I could do this one! View
Julien Lefebvre - 1 hour ago
Rod Irvine your house mate View
News 57

Mac John - 2 hours ago
Election matters: Challenge to Candidates: How about limiting the number of terms to two and get fresh (first time) candidate... View
Colin Vivian - 11 hours ago
Anyone over 50. Letting contracts to remove trees in Parkland before public consultation was held then announcing works six m... View
Robyn Holder - 14 hours ago
Steve Wood and there you go with the rightwing thinking of how to disenfranchise people. Congratulations. View
Community 1

George Watling - 11 hours ago
Bill Gemmell Very witty 🙂. A chance find of the yellow stuff would be good for the current government it would save them a... View
HiddenDragon - 13 hours ago
The 2019-20 Budget Review released in February showed net Territory debt of $5bn by the end of that financial year - so even... View
Julie Macklin - 14 hours ago
Colin Vivian, The bridge replacement was a suggestion from the Federal government, not local. Now it's not to be replaced, bu... View
Community 12

SP Brogues - 12 hours ago
All that landfill View
Property 14

Shaun Claypole - 15 hours ago
Jessica Botterill I just saw this We are in... View
News 1

A milestone mixed-use residential development has been proposed for the commercial area of Phillip, potentially paving the way for a...
Breaking 0

The indicators are all there: an abundance of corflutes on the roadside, piles of political flyers in your letterbox, being...
News 57

One day a week of free early learning for three-year-olds and 400 more teachers and support staff for ACT public...
News 36

@The_RiotACT @The_RiotACT
Want the country lifestyle with a short commute to Canberra? This elegant, luxurious six-bedroom residence in rural-residential Wamboin could be just what you’re looking for https://t.co/HJDBFHKeON (1 hour ago)

@The_RiotACT @The_RiotACT
Canberra's much-loved GG's Flowers has to move and needs a new home for their blooming social enterprise. Can you help them find a new place to blossom? https://t.co/oH67IWg4dc (11 hours ago)