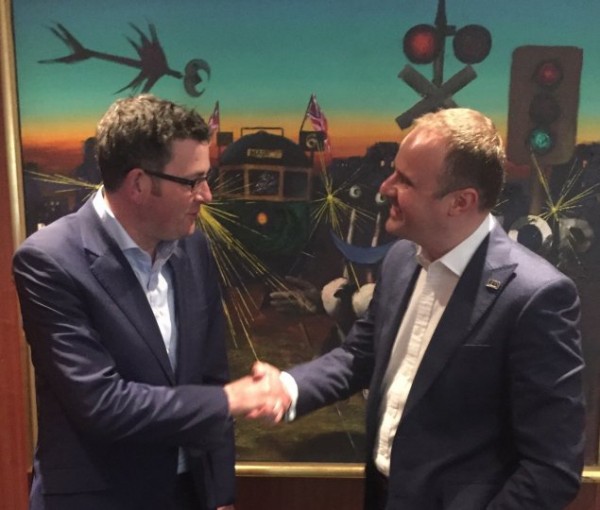 ACT Chief Minister Andrew Barr says he and Victorian Premier Daniel Andrews have agreed to work together on the Safe Schools program, information sharing to help prevent family violence and progressing low cost flights between Canberra and Melbourne, following a meeting in the Victorian capital yesterday.

The Safe Schools program is designed to prevent and manage bullying and discrimination faced by young LGBTIQ Australians.

The Chief Minister said 80 per cent of homophobic and transphobic bullying amongst young LGBTIQ people occured at school. Bullying distracted students from learning and sapped them of their potential – and it had an impact far beyond the classroom, he said.

“While extreme conservatives in the Liberal Party have attacked this program, Premier Andrews and I are proud to stand up for it,” Mr Barr said.

“We both support the Safe Schools program and, following our meeting we will share curriculum resources and the findings of research into ways the effectiveness of the program can be enhanced.”

The Chief Minister said the family violence package in last week’s 2016-17 ACT budget built on the findings of the Victorian Royal Commission by establishing a dedicated funding source for the program in the form of Australia’s first family safety levy.

“Premier Andrews and I agreed to progress information-sharing between our governments to help keep families safe, including sharing research findings,” Mr Barr said.

“We will also undertake collaborative projects so both jurisdictions benefit from each other’s successes and resources.”

The two leaders also discussed working together on access to medicinal cannabis in their respective jurisdictions including implementing trials and conducting research in the area together.

They also discussed the potential boost a low cost carrier offering cheaper flights between Canberra and Melbourne would provide to tourism in both directions, supporting jobs in both cities, and committed to joint effort to encourage the operation of such a service.

Samuel Gordon-Stewart - 3 hours ago
It should be noted that 2CA is not, as described in the article, a commercial talk station. It is a music station. 2CC is cor... View
Nicholas Love - 5 hours ago
Chris Olsen I appear to be the person that listens to 2ca? Not many in my age bracket it would seem 😎 View
Kat Rothwell - 6 hours ago
Y'all just beige View
Opinion 61