In a history-making battle of swing, this Friday 8 August the Albert Hall will be the scene for a Battle of the Big Bands between two of Canberra’s favourite big bands – Blamey Street Big Band and Spectrum Big Band.

The Battle of the Bands was a feature of the Savoy Ballroom in Harlem, New York, at the height of the swing era and the Savoy played host to famous ‘battles’ between Count Basie’s band and the house orchestra led by Chick Webb. This weekend the excitement of the jazz era is recreated in Canberra.

The Battle of the Big Bands is one of the events being held during Canberräng —Canberra’s Festival of Swing (Thursday 7 to Sunday 10 August 2008). The weekend draws together swing dancers from all over Australia and profiles some of Canberra’s best big bands and small group swing and blues bands. 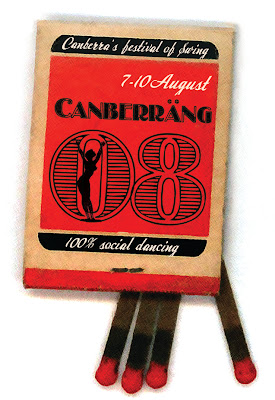 A full program of events can be viewed at http://www.canberrang.org.
Phone 0402 466 440 or email: canberrang@jumptown.org for more information.

Antony Burnham - 52 seconds ago
surely they are to be contrasted with passive transport trips, i.e. falling asleep on the bus and missing your stop View
Craig McPherson - 7 hours ago
Tristan Melhuish oh yes, and hey I get this language from government - bureaucracy at its finest - but from a journalist - su... View
Tristan Melhuish - 7 hours ago
Craig McPherson or signalising an intersection when they are installing traffic lights? 😂 View
Opinion 42

Eileen Dempsey - 1 hour ago
Lovely photo Barbara 💕 View
The RiotACT - 6 hours ago
Judith Winter Hi Judith, if you head to their Facebook page tagged in the caption you will be able to contact the Red Hatters... View
Judith Winter - 6 hours ago
How do you become a Red Hatter in Canberra? View
News 7

Don Rail - 1 hour ago
ACT????? View
Jason Ezra - 1 hour ago
Lobby your elected representatives to change the law to bring the requirements into line with every other jurisdiction. View
Kriso Hadskini - 5 hours ago
Judges 4chan fans? View
Opinion 68

Luela Paco - 1 hour ago
Canberran life is peaceful and balanced. Love the ambiance and the people. Love my life in Canberra. View
Matthew Soall - 3 hours ago
Janet Ilchef To the point of disaster. View
Shane Wheller - 4 hours ago
Shayne Borger you need a Snickers? View
Community 7

Greer Brennan - 3 hours ago
Ohhh some more food for thought View
Maria Greene - 5 hours ago
We went to one in Melbourne and the food was terrible and service weird. They may have difficulty getting staff during covid View
Carmel McDonell - 6 hours ago
Thai Herb -second that!!! View
Opinion 204

Alan Sargeant - 13 hours ago
Celebrate it on 1 January, it means one less Public Holiday for all. View
show more show less
*Results are based on activity within last 7 days

Thai is one of my favourite cuisines to cook and eat. Fresh humble ingredients perfectly balanced to achieve harmony between...
Breaking 0

It's the week before the national holiday that causes division across the country, so it wouldn't be right for me...
Opinion 68

Although Summernats was cancelled this year due to COVID-19, streetcars continued to make the news. ACT Policing worked closely with...
Opinion 42

Vaccine rollouts will begin in a month after the Pfizer COVID-19 vaccine was provisionally approved for use in Australia by the Therapeutic...
Opinion 60

Whenever a story about cycling appears, it activates an avalanche of pent up angst from the wider community. Predominantly it’s...
News 26

@The_RiotACT @The_RiotACT
January is wrapping up, but there’s still plenty to see and do in Canberra over the coming week https://t.co/yDyCfOctiv (2 hours ago)

@The_RiotACT @The_RiotACT
Geocon has given ground but the YMCA will still oppose a 14-storey development next door to its Gungahlin childcare centre https://t.co/AfdmfRnk2z (4 hours ago)