Be part of Waterford live recording their new album at the Polo! 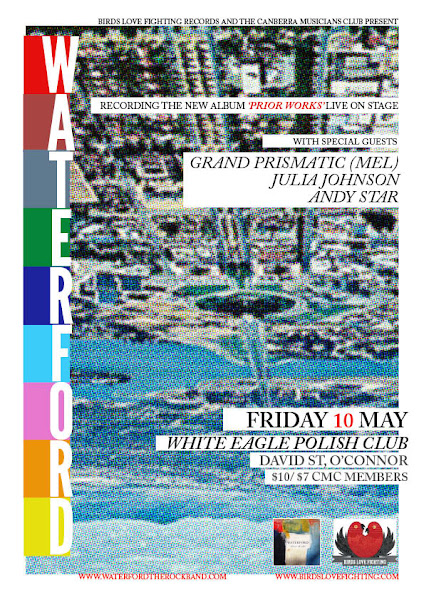 The thinking hipster’s obscure band Waterford have announced they’re recording a live album at the Polish Club in May.

Canberra beat rock combo Waterford will record an album’s worth of new material live onstage this May. The group, who have been working on a follow up to 2011’s critical favourite Say Ok, will perform a set of new songs that will go toward their upcoming LP, titled Prior Works, at the Polish Club on May 10.

“It’s a way for us to do something a little different, and ideally grab some of the energy that comes from performing at the Polo” says singer/songwriter Glen Martin. “The vibe of that room is excellent. Considering that our preferred method of recording is playing together in a room, capitalising on that energy and recording a show in front of an audience seems like more interesting way of getting a record together.”

The show will be recorded by Bruce Callaway, who worked on Say Ok and has worked with the Triffids, Ed Kuepper, the Celibate Rifles, the Fighting League and Old Ace.

The show will also feature Birds Love Fighting labelmates Grand Prismatic, whose debut record came in at #38 on the Mess and Noise critics list of 2012. They’ll be making their Canberra debut. Julia Johnson (of Julia and the Deep Sea Sirens fame) and Andy Star (ex Holden Caulfield) round out the bill. JC Inman will MC the event.

The show is presented by the Canberra Musicians Club and Birds Love Fighting records.
Tickets will be available on the door for $10/ $7CMC members.

Jacq Miller - 2 hours ago
shame there are no longer all 4 in situ View
Barry Matson - 5 hours ago
of what? View
Michael Guina - 5 hours ago
It has to start somewhere and those two buildings are living example . View
Opinion 80

Max Kelty - 6 hours ago
Bel Lee your housing manager mustn't be doing their job then or else processes have changed. When I was a HM at HACT people w... View
William Coats - 10 hours ago
The land tax was to stop people “land banking” houses should be used as homes not stagnant investments View
Lea Powell - 16 hours ago
William Coats it takes time to change policy directions. It’s not as simple as a click of the fingers. View
News 8