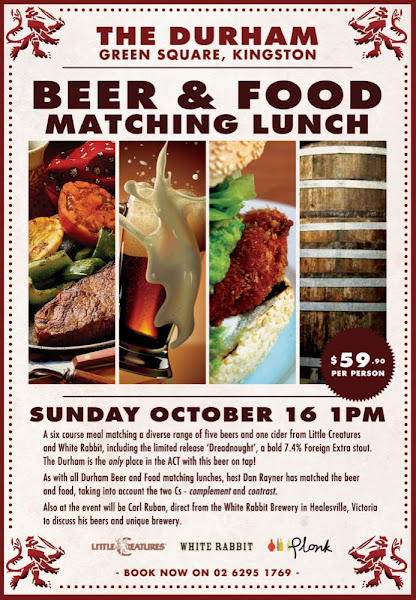 Just cos I love fantastic craft beers in Australia I’m hosting another beer and food matching lunch at the Durham Castle Arms in Green, Square, Kingston on Sunday 16th October from 1pm.

This time it’s focussed on Little Creatures and White Rabbit – all of which will be on tap for the afternoon. We even have the brewer from White Rabbit Brewery, Carl Ruban, up from Healesville, Victoria to speak on White Rabbit beers, brewing at White Rabbit and the pretty unique fermenting methods they have at the brewery. They use large, rectangular, open fermenters called Yorkshire Squares (named so because it’s the same way they ferment beer in… well… Yorkshire funnily enough!).

Here’s a peak at the menu on offer:

Little Creatures Dreadnought was produced as a one-off, there’s just the one keg and the Durham is the only place it’s available on tap! Woot!

Six course, five beers and one cider all for $59 per head. Plus I am hoping to have a surprise or two for those attending on the day

Contact Adrian or Tristan at the Durham on 62951769 for bookings,

I hope to see some of you there, cheers!

Oh and if you’d like to look at a pdf of the menu or you really want to convince your partner, friend, intimate other, bestie or pet cockatiel that you should go, here’s a link to a pdf:

Heidi Kark - 42 minutes ago
Simon Trommestad I believe your example to be logically consistent with what I’ve said above- In that the death would still... View
Jonny Ivan - 3 hours ago
write this year off View
Joanne Mitchell - 6 hours ago
David Warwick and why did they remove the mask mandate two weeks before the first case while Sydney’s numbers were still cl... View
News 47