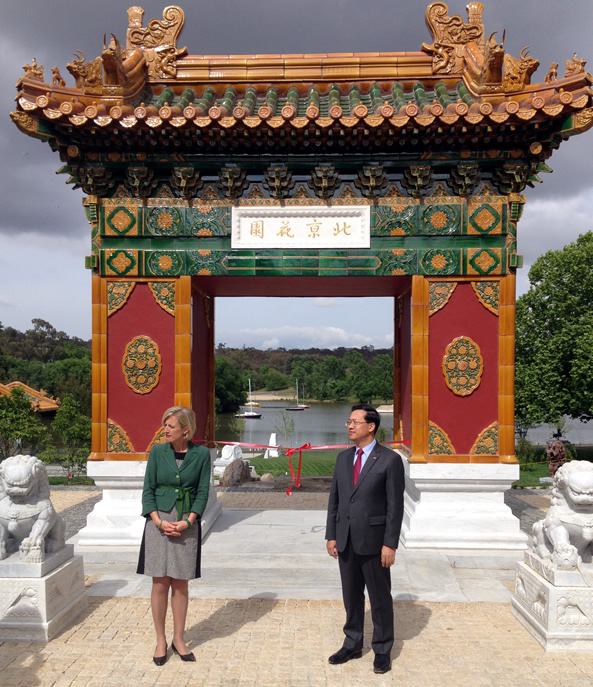 “The new Beijing Garden is a fantastic addition to the Canberra landscape and will no doubt be a place of reflection and relaxation for both locals and visitors alike,” the Chief Minister said.

“The garden highlights the significance of Canberra’s sister city relationship with Beijing. I’d like to sincerely thank the Beijing Municipal Government for its generosity in making the project possible. A team of Chinese artisans brought all their talent to bear in creating the garden’s sculptures and pavilion using traditional Chinese stone masonry, as well as the paths, rock garden and beautiful landscaping.

“The opening of the garden symbolises the important cultural ties between Canberra and Beijing and coincides with the 14th anniversary of the signing of our sister city agreement. Our two cities also have over 40 years of diplomatic relations and strong economic ties.

“The garden is located close to the Chinese embassy and its position on the foreshore offers views across the lake towards some of Canberra’s famous landmarks like the National Museum and Black Mountain tower,” the Chief Minister said.

Ambassador Ma Zhaoxu said it had been an honour for the Beijing Municipal Government to deliver the project.

“The establishment of Canberra’s Chinese garden and pavilion symbolises the strong economic and cultural ties between our two countries,” Ambassador Zhaoxu said.

“We share many bonds that extend beyond the formal sister city title and facilitate strong friendship links – connections which exist between our children, businesses and communities, and a growing partnership between our universities which was further developed as part of the StudyCanberra delegation visit to China last year.

“Over time, the garden will grow just as the friendship between the people of Canberra and the people of Beijing is prospering,” Ambassador Zhaoxu said.

Andrew Brettargh - 37 minutes ago
Multi story and solar panel the top.. pays for itself.. View
Tom Adam - 3 hours ago
Why won’t they make it multi storey, instead of stealing parklands?? Not a wise investment.... View
Steve Herczeg - 7 hours ago
I've always wondered why there's a statue to celebrate single mothers at the top of the street. View
Property 36

Elroy Jones - 58 minutes ago
If you'd like to live in a rural setting then perhaps consider moving away from the city. View
Property 5