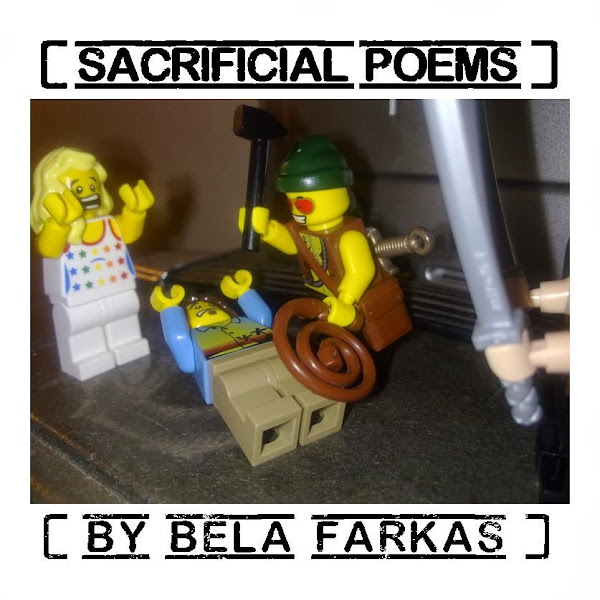 Bela Farkas is BAD!SLAM!NO!BISCUITS! eternal sacrificial poet, and is launching his first CD of poetry next month at the Phoenix Bar.

You should probably go.

Serial celebrity name dropper Bela Farkas is a Canberra-based poet. A lot of his work has been heavily influenced by popular culture and current events. He has featured at Canberra’s BAD!SLAM!NO!BISCUIT!, Traverse Poetry Slam, ACT Australian Poetry Slam and The Dancing Dog. He has also performed at Corinbank, Canberra Fringe, National Folk and YouAreHere festivals as part of the Tragic Troubadours. He has been published in The Delinquent and has given speeches on poetry and performed at schools. He will also be appearing on the Behind the Words documentary series later this year.

Bela will be launching my new poetry CD Sacrificial Poems at the Phoenix on the 4th of December from 7.30pm to 10.30pm. To help celebrate this event he has assembled an all-star line-up of poets including Duncan Felton, Alison McGregor, Zoë Erskine, Aaron Kirby, Andrew Galan, Arrin Chapman, Ellie Malbon, Ryan Schipper & Amelia Filmer-Sankey.

The night will also include performances by the Kooky Fandango and Hayley Shone.

There is not a name on that list that shouldn’t excite you.

Jake Winters - 6 minutes ago
Ana Martinez enjoy mother x View
Nicole Thomson - 5 hours ago
Becky Cormack if it’s In a format for a random person to engage with (which it Isn’t) Plus schools are indicating it will... View
Natalee Gersbach - 6 hours ago
If only we had NBN, working from home and kids schooling from home might not be such a huge issue. Almost our entire suburb h... View
Food & Wine 3

OldMan Wyatt - 4 hours ago
I have always preferred chocolate rather than seafood at Easter View
FishCo Fish Market - 5 hours ago
Thank you for your lovely feedback. Anna truly loves what she does and this will mean a lot to her. :)... View
Michelle Littlewood - 8 hours ago
FishCo Fish Market Thank you for your fantastic service and exceptional seafood. Anna was wonderful when placing my order, an... View
News 32

jima - 15 hours ago
Could have told you this sort of thing would happen when it was sold 20yrs ago. Privatisation at its best. View
News 16

Paul Dowden - 15 hours ago
Laurence Kain I was there. View
show more show less
*Results are based on activity within last 7 days

@The_RiotACT @The_RiotACT
With empty shelves, panic buying and stressed customers, how are Canberra’s supermarket workers coping with the COVID-19 crisis? https://t.co/cf17uw7t3t (2 hours ago)