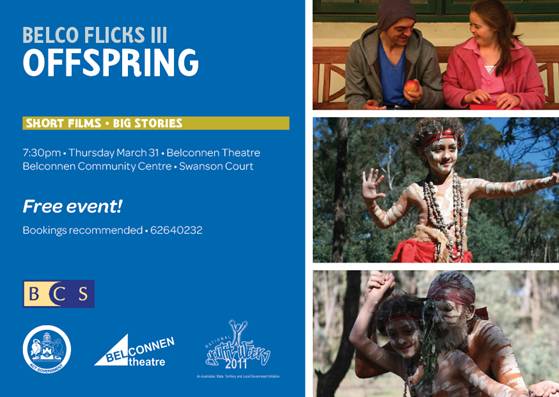 Belco Flicks returns to the Belconnen Community Centre this Thursday and has this to say for itself:

“Tinman”, directed by nineteen year old James Hunter and produced by Simon Weaving, shows a father and son who have been estranged for many years.

“Dust Up” directed by Richard Jameson with music by Duncan Smith shows an older Aboriginal man seeking resolution for his past mistakes.

“Beautiful”, is about love and acceptance. It was made by people with and without disabilities in collaboration with award winning director, Genevieve Clay.

Other films show a daring rescue by tricycle-riding toddlers, the lighter side of middle-age, a small boy tackling big issues and the Christmas Island boat tragedy.

Belco Flicks III – OFFSPRING includes new work as well as films that have been previously shown at the Ark Cinema at the National Film and Sound Archives, Lights Canberra Action, the Canberra Tropfest event and the Optus one80project.

Director, Rafael Florez, a Belco Flicks regular says his film Booster Luca was specifically completed for Belco Flicks III – OFFSPRING from footage that had been on the hard drive for eight years and never shown outside the family. Booster Luca’s eldest star started high school this year.

Marea Fatseas - 21 minutes ago
David Riddell the waste normally going to landfill in Mugga Lane wouldn’t be enough to meet the proposed CRS target of 300,... View
Capital Retro - 14 hours ago
Double handling makes no commercial sense but the ACT government is worried about that. It is more likely that the waste we a... View
Maya123 - 15 hours ago
I have been in Canberra since way before 2008; 1974 in my case, and I always heard Fyshwick referred to as light industrial b... View
News 45