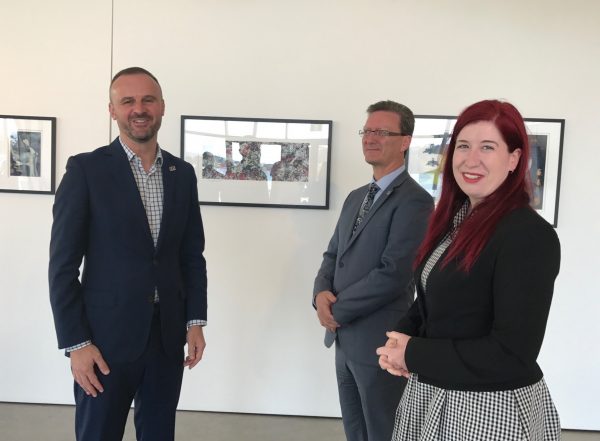 ACT Chief Minister Andrew Barr and ACT Arts Minister Gordon Ramsay Arts have confirmed their Government will build stage two of the Belconnen Arts Centre as promised before the last election with $15 million to be allocated in the upcoming Territory Budget for the project as part of an arts package worth $21.6 million.

Stage two of the Emu Bank centre will include a multi-use town hall/performance space, improvements to workshop spaces, new dance studios and an expanded exhibition space.

As part of the pre-Budget announcement, Mr Ramsay has moved to answer criticisms from practitioners and lobbyists in the sector who were shocked at how few arts project grants were awarded in the first round following the election by announcing that project funding in the ACT will sit at a base level of $750,000 per financial year from now on, rather than varying year on year in line with available funds.

See our archived live coverage of Mr Ramsay and Mr Andrew Barr announcing the funding and responding to media and arts sector representatives’ questions at the Belconnen Arts Centre, where they were joined by former Belconnen Arts Centre board member and Member for Ginninderra Tara Cheyne, here:

In addition to the project funding commitment and the Belconnen Arts Centre expansion, the package announced yesterday provides $100,000 per year in project funding specifically for Aboriginal and Torres Strait Islander artists as well as funding for Kulture Break and the ANU’s Advanced Music Performance Program, funding for Art, Not Apart in New Acton, the Design Canberra festival and the Canberra Writers Festival as well as new pop-up arts events in Woden and Gungahlin.

More than $800,000 will be shared between five arts centres over the next four years to help cover the cost of upgrades to the Ainslie and Gorman Arts Centres, Strathnairn, Tuggeranong Arts Centre and Watson Arts Centre as part of the Chief Minister, Treasury and Economic Development Directorate’s Better Infrastructure Fund allocation.

The package will fund upgrades to lighting at Canberra Museum and Gallery (CMAG), including the replacement of existing spotlights and floodlights to improve safety, reduce future replacement costs and reduce the museum’s carbon footprint.

The Government will also undertake community consultation on the current performing arts capacity in the Territory, including the Canberra Theatre, to help identify what infrastructure may be required into the future.

Mr Ramsay said the package would support the Government’s vision for a more vibrant Canberra with better facilities and services in the arts sector.

“We are committed to supporting and sustaining the arts in Canberra,” he said.

“We know the vital role the arts play in offering an outlet for creative expression for people from all walks of life. They significantly add to the vibrancy and liveability of Canberra.”

Mr Barr noted that there will be further arts-related announcements tying in with his own portfolio of Tourism and Events in the Budget.

Arts funding is a component of the Parliamentary Agreement between Labor and the Greens.

Susi Hewatt Bauer - 15 hours ago
Geri Zeiler perfect for you guys 🐎 View
Daymien Clydesdale - 18 hours ago
Daniel Lewis its an omen....see the name of the property. View
News 1