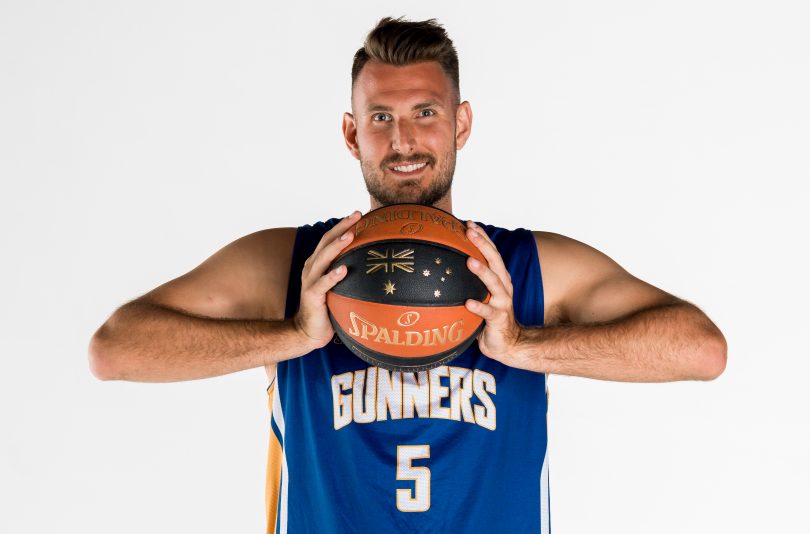 It’s been a big few years for Canberra Gunners’ veteran, Ben Allen – on the court and off it.

Since arriving in the capital for the 2014 SEABL season, he has posted career numbers on the hardwood, finished a teaching degree, started his first ever “real job”, and pursued representative coaching with Canberra’s next generation.

Transitioning from AIS scholarship holder to U.S. college athlete and on to an NBL schedule involved constant moves interstate and around the globe for Allen from ages 17 to 27. Returning for his fourth year in a Gunners uniform, Allen says he is enjoying feeling at home for the first time since childhood in Melbourne.

After buying a house and starting full-time work as a history, religion, and PE teacher at St Mary MacKillop College, Allen says the values he learnt playing and coaching hoops have translated into the classroom.

“I knew after coaching a little bit that I would like to get into teaching,” he says. “It’s all about figuring out how each kid learns the best. Every kid is different.”

Allen says the school supports his Gunners commitments, providing flexible hours to compensate for road trips. He jokes that having a “real job” for the first time is tiring some days, but says he is loving the role.

“Teaching is awesome and I’m really finding my feet in my second year,” he says. “It’s great building relationships with the students.”

Last season, the 211cm center had a record year in rebounds (11.6) and assists (3.9), including his first career triple-double. On a young team filled with 17 and 18-year-olds, Allen spent the season mentoring Canberra juniors like Glenn Morison and Broderick Doran. Morison has now received a development role with the NBL’s Cairns Taipans, while Doran recently received MVP of Canberra’s Premier 1 Men’s competition.

“Ben’s impact over the last four years has been massive,” says Gunners coach, Shaun McEachin. “Obviously in his ability to score and rebound, but also as a mentor and leader in this young group,”

While mentoring Morison and Doran as Gunners teammates, Allen is now also teaching them skills from the sideline. Appointed to his first representative Head Coaching role, the 31-year-old has taken the U20’s ACT reigns after two years as an assistant coach in rep programs.

“Getting my feet wet with the assistant role the last few years, I learned a lot,” he says. “And now I’m bringing my own take from what I’ve learnt playing.”

“When Glenn got the call up to Cairns I was so happy and so proud of him,” he adds. “I knew he was going to experience a whole new level.”

As Allen continues to prep the U20’s for February’s 2018 Nationals, he is also prepping himself for his eighth SEABL season. And while he still looks forward to mentoring the Gunners’ young talent, Allen’s message for Canberra fans is simple.

“It’s not a rebuilding year anymore,” he says. “It’s time for us to step up, make finals, and really have a crack.”