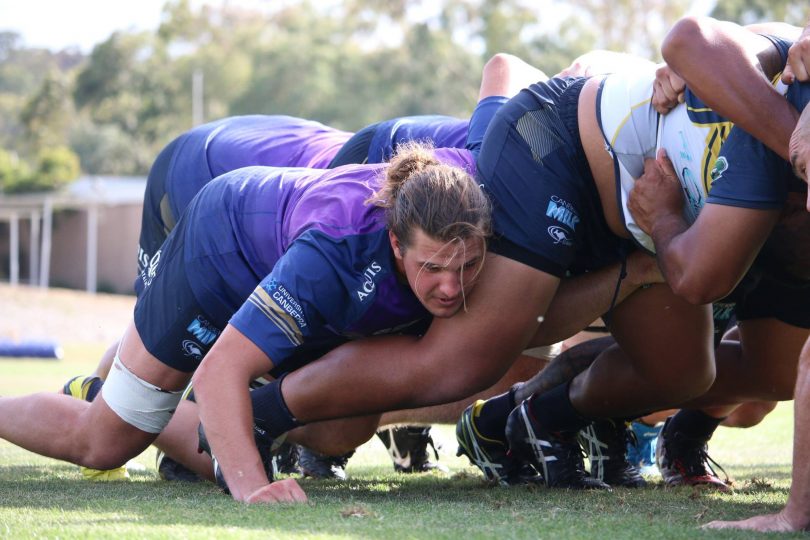 Hyne has had an unfortunate run with injury and has spent the past 12 months recovering from surgery. Photos: Supplied by Brumbies Rugby.

He has spent the majority of 2018 recovering from a knee injury suffered during last year’s National Rugby Championships (NRC) but lock Ben Hyne is set to lead the Canberra Vikings experienced squad in the 2018 NRC.

He was man-of-the-match in three of the first four Vikings games last season before injury struck and forced him to spend the past 12 months recovering from surgery but head coach Nick Scrivener has given him the responsibility to skipper the 33-man squad this season.

Hyne played the last three games of the Tuggeranong Vikings John I Dent Cup campaign and will head into the opening NRC clash against last years champions on 1 September with only 190 minutes of match fitness under his belt. But the 24-year-old said he feels prepared to lead the side and has put the injury behind him.

“Injuries are a thing in rugby aren’t they and you can’t hold on to them and you move on from them as quickly as you can,” Hyne said this morning.

“With my knee, there was 11-month rehab block put in place for it and once that was up I was good to go. It wasn’t a thought in my mind in the three games that I have played so far.

“Personally, for myself, I just want to get back to playing good football. I am not looking too far ahead and I am focussing game by game and hopefully, I can have a good campaign.”

Scrivener believes the young lock is ready for the responsibility of the captain’s armband and said Hyne is champing at the bit to get regular game-time under his belt ahead of the 2019 Super Rugby season.

“Hyne is an extremely talented footballer and will no doubt lead by example both on and off the field,” Scrivener said. “Ben is well respected amongst the playing group and has all the attributes that you could want in a leader.”

Scrivener has selected an experienced squad to tackle the seven-round competition as the Vikings look to go one better than the 2017 season, which saw them lose out at the final hurdle beaten by Queensland Country. 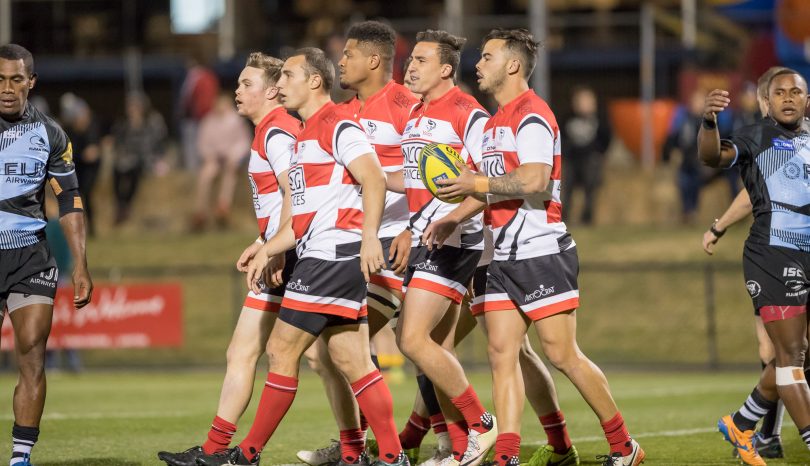 Wallabies squad members Rory Arnold and Tom Banks are both in the squad for the fifth iteration of the NRC. File Photo.

The team also has a strong representation from the local John I Dent Cup with Canberra Royals scrumhalf Argentinean-born Pedro Rolando, who was the leading scorer in the this season’s competition.

Scrivener is confident the young emerging talent within the team provides him with a well-balanced, hungry and enthusiastic group.

“I believe it is an excellent blend of youth and experience and has the potential to play a fast-paced, running game as well as being physical at the set-piece and difficult to contain,” he said.

“It’s great to see so many young players included who will no doubt use the NRC as a stepping stone in their careers. 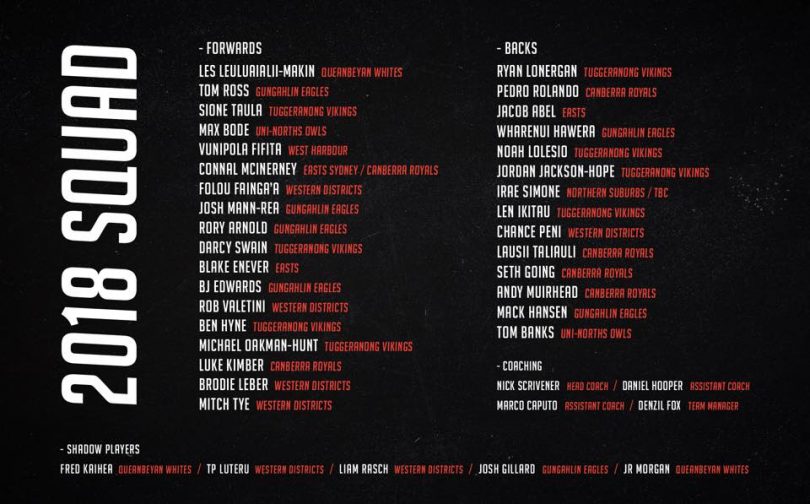 “I am expecting this season to be a tough test for the players, there are no easy matches in this competition and the schedule is such that any slip-up could be detrimental to playing finals football.

“With one week’s preparation leading into the first round it is vital we get the players aligned with how we want to play as quickly as possible and focussed on our first home game against Queensland Country.”

Brumbies co-captain Sam Carter and flankers Lachlan McCaffrey and last year’s captain Tom Cusack will not take part in the NRC this season after a long and tiring Super Rugby campaign, being ruled out by Brumbies to recondition after a rigorous season.

The Vikings begin their 2018 NRC campaign with the grand final rematch against Queensland Country at Viking Park on Saturday 1 September with kick-off at 5 pm.

Jo Hann - 33 minutes ago
David Brown that would involve Suez giving the ACT Government a refund, which just ain't going to happen. That's what happens... View
Jo Hann - 34 minutes ago
Joanne McRae we do, so Suez is pitching their case in the court of public opinion with their stooges writing propaganda like... View
Cheryl Thuillier - 1 hour ago
Garbage truck drivers want unbelievable pay rise. Nurses could get, why should the garbage truck drivers View
Opinion 3

Lee McDowall - 59 minutes ago
Nurses should be paid so much more. Garbos think they have a tough job, swap for a day then ask for 12% over 3 years. Nurses... View
Roberta Lynne Anning - 2 hours ago
Give them the same pay that the garbos get, and give the garbos the same pay that the nurses get. They just might shut the he... View
Rodney Thompson - 12 hours ago
Someone who actually deserves a payrise. View
Community 22

Clare Jones - 9 hours ago
Why say these are open when the two we've been to still have temporary fencing and one even still had a tractor inside the fe... View
Business 5

Ashley Wright - 12 hours ago
Chris Olsen actually Clinton was right. William Hovell drive had the limit lowered between Coulter Dr and Bindubi street beca... View
Tolga Altinbas - 15 hours ago
Because one is a roadwork sign. And the other one is always there on the pole View
Wang Chow - 17 hours ago
My guess is that they changed the speed limit in Chisholm/Richardson because its cheaper than putting in more speedbumps that... View
News 21

Darron Marks - 19 hours ago
"But in this world nothing can be said to be certain, except death and taxes" View
News 4

Bill Gemmell - 20 hours ago
Additional well-located transport infrastructure is a plus. However, maybe they should be thinking about covering these with... View
Greg Batten - 23 hours ago
Great idea for both ACT light rail and bus networks. View
Opinion 22

Julie Macklin - 22 hours ago
Many other countries don't have the unpopulated distances that we do. It's a different matter driving an electric car in Euro... View
Lifestyle 1

Chief Minister and Treasurer Andrew Barr has ruled out a specific tax on electric vehicles but that doesn't mean EV...
What's On 0

Here's our top 10 picks for your week, including plenty of music on Friday and Saturday, and a fascinating talk...

It seems too many Canberra motorists are still rushing to meet police, with speeding offences bringing them to highway patrol...
Opinion 25

We're all in this together. That's been the mantra for 2020 - the year that's brought almost every catastrophe to...
News 33

@The_RiotACT @The_RiotACT
Buyers are flooding the Canberra housing market, pushing prices to record highs. Find out why and what's hot https://t.co/PqxXutRy0V (2 hours ago)

@The_RiotACT @The_RiotACT
Ten local companies are polishing their pitches for Canberra Innovation Network's annual Innovation Showcase. Here's how you can get involved https://t.co/poNkIicZBH (3 hours ago)

@The_RiotACT @The_RiotACT
Experts advise people living in the ACT & surrounding regions to be on high alert for grass & crop fires this summer https://t.co/g2KJ0Yo9nP (4 hours ago)